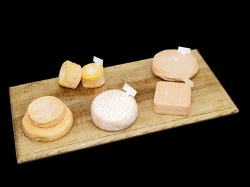 Situated between the sea and the farmlands of the Avesnois and the Monts des Flandres, Nord-Pas-de-Calais offers an unexpected cuisine which will delight the palate of the adventurous in quest of lovely culinary surprises.

Further inland, the Belgian influence can be seen in traditional dishes such as: rabbit with prunes, langue de boeuf Lucullus de Valenciennes (slices of smoked ox tongue lightly spread with a mixture of butter and foie gras), smoked garlic soup and pot-au-feu or stew, known as hochepot.

The Nord-Pas-de-Calais is still an important agricultural region and over the last dozen years has seen the development of new products, including: potatoes (Ratte du Touquet, Charlotte des Sables, Pompadour) have appeared on the market. Cauliflower has made St-Omer famous and Perle du Nord chicory is grown here exclusively.

Nord-Pas de Calais is one of the most important cheese producing regions of France. The abundance of grass in the Avesnois and Monts des Flandres are ideal for grazing cows. Try the famous Maroilles variety, the Dauphin, Boulette d’Avesnes, Coeur d’Arras or Bergues cheese, not forgetting the Vieux-Lille, also known as the puant (or ‘stinker’).

The last and not the least surprising speciality is Vieux Hollande. This crumbly orange cheese is ripened in the hundred-year-old cellars of a cheese maker in Roubaix. On the dessert side, regional delicacies are rarer, but it is difficult not to appreciate a fruit tart or pie with cream.

Nord-Pas-de-Calais is one of the two great brewing regions of France. The character of its beers is influenced by both Belgium and England. Typical examples are produced by top fermentation, which gives a fruity flavour.

Despite the disappearance of most of the large breweries, numerous small enterprises strive to safeguard the range of special beers, including: Angélus, Cuvée des Jonquilles, Triboulette, Choulette and Ch’ti.

The culinary prowess of the region is translated into a large number of restaurants picked out by the national guides. On the Opal Coast there is a higher density of star listed restaurants than in all the other regions of France. Lovers of good food will take great pleasure in a myriad of more modest restaurants, where the chefs take every care to preserve the culinary traditions of the region.