A battle against rocks, weeds and a lack of water 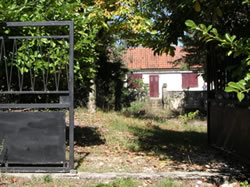 In September 2004 When David and I came to live in Blars, a small village in the Parc Naturel des Causses du Quercy, Lot, we had three things we wanted to do. One was to renovate an old barn that we had bought in a nearby village more than a year before for long term let; the second was to set up a decorative ironwork and garden creation/maintenance business and the third thing, by way of relaxation, was to develop the land at Blars into a productive and attractive garden.

This third task turned out to be much more hard physical work than gardening for relaxation! Although the house had been lived in from time to time, the land hadn’t really been worked for several years before we moved in. The perennial weeds had got a real hold turning the land into what our nearest neighbour described as une prairie or meadow. 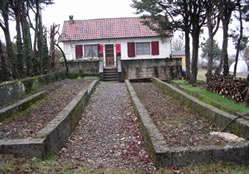 Our first job was to cut back overgrown trees, shrubs and brambles to determine exactly where our boundary was and, thus, what land we had to work with. We also wanted to let light into some pretty sombre looking raised beds at the front of the house, of which another of our French neighbours said Ils ressemblaient un cimetiere! (They looked like a cemetery). This was because they were long, made of grey breezeblocks and were shrouded by the overgrown fir trees.

We invested some money in a second hand motoculteur or rotovator with plough, grubber and furrowing attachments. This was absolutely invaluable in helping to clear and prepare the ground and definitely a ‘best buy’. From scrap pieces of wood, metal and a set of spare trailer wheels David made a tipping trailer, with brakes, to fit on the back of the motoculteur which we have used endlessly not least for clearing tons of stones and weeds from the land. 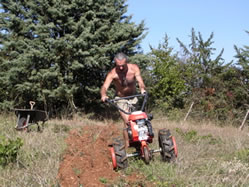 Ploughing the whole plot was a tough and physically demanding job, avoiding a plateau of rock here or heaving out large rocks there. The weeds and plants that thrive on the land here invariably have a single, long tap root or a network system of roots enabling them to seek out the moisture deep in the soil in dry and arid conditions. Even after ploughing, it was often difficult to get the whole root or root system up out of the ground. We knew we would have a job on our hands later in the year keeping on top of the weeding! 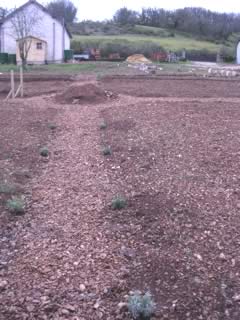 The next task was to divide the land up into useable plots so that we could rotate them each year according to good gardening principles but also giving us a couple of spare plots to experiment with green manures such as lucerne and sunflowers which can be grown and ploughed back into the land for nourishment. Having not been worked for many years, the soil was in dire need of as much organic matter as we could provide to add nutritious texture and to hold on to precious water which quickly disappears down through the stones and rock. We had established some compost bins as a priority when we first moved in where we recycle all vegetable peelings, spent plants, grass cuttings, coffee grounds, tea bags etc. so, later in the season, once it was rotted, it would go a little way towards providing some substance to the soil.

Once we had marked out the plots and paths we stood back to look over he layout and we were overawed again by the huge numbers of stones; thousands of them covering the land. This was the ‘Causses’ after all and we were gardening on a huge limestone plateau that covers this area. We would have to do something about clearing some of the stones from the plots before planting in order to give the seedlings some chance of survival. 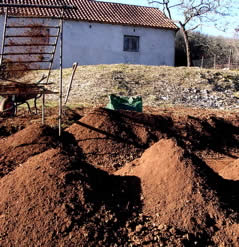 David came up with another one of his great innovations – a home made riddle. In our loft we had found a rusting iron bedstead that with the addition of a couple of metal legs and a covering of chicken wire became a riddle. With a wheelbarrow underneath to catch the stones, we shovelled soil and threw it at the riddle, biceps throbbing with the effort. The stones we collected were then used to cover the paths that we had marked out across the plots in the hope that we could keep at bay the weeds, which would inevitably come back.

We realised, however, that stone-clearing is not a job that is done just once. Each time before planting, stones need to be cleared as they just keep coming!

One of our most important considerations after this, was how we could capture and keep rain water for watering the plants (la recuperation de l’eau de pluie). We had been warned by French neighbours of possible prolonged periods of drought during summer months and of vigilant policing with stiff fines for people caught watering using mains water during these periods. We were also aware that an average sized house roof could yield hundreds of litres of water from a single rainstorm. We already had a small concrete pond near to the house with a makeshift piece of guttering taking water from the two down pipes on the house into it but so much water was being lost as the guttering was unable to cope with the flow. 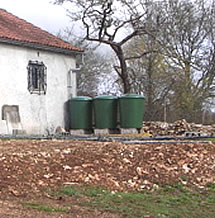 We quickly installed two 500 litre water butts with overflow pipes from each one so that excess water filled the pond rather than being lost into the ground. These were entirely filled by the end of the next brief rainstorm; over 1,000 litres of water in no time at all!

A couple of months later we put guttering all around the workshop and installed three interconnected 500 litre water butts to gravity feed water through a hose to the poly tunnel below it. So far this year, we are delighted that we have managed to meet all our watering needs in the poly tunnel, on the plot and the flower beds all from captured rain water and without having to use mains water.

Read Part 2 of this article – The selection of flowers and vegetables to cope with the conditions and climate.

Lindsay Nixon and David Low spend their time renovating a barn, running their ironwork and garden creation/maintenance business and creating a productive and attractive garden at their house in Blars.

For more information on Ironwood Motif visit David and Lindsay’s website www.ironwoodmotif.com, email them [email protected] or telephone on +33 (0)5 65 30 53 99.