April in the Lot and Quercy by Mamiaj 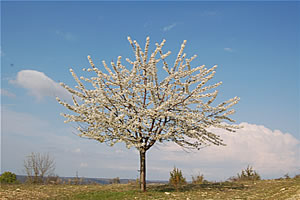 Why is it that a day spent in the garden is so satisfying? When I came in I was dirty, tired, bloody but unbowed – I had spent quite a bit of the day giving the roses their Spring haircut and they had fought back, and now, after a shower and with a glass of the red stuff – Cahors bien sûr – by my side I feel the glow of a job well done.

For all gardeners, whether you have had a garden forever or have just acquired a plot and have all sorts of plans, the early spring is great. While weeding I discovered that the hardy fuchsias are beginning to shoot, so it is decision time, do I cut back the top growth from last year, or leave it as frost protection for a while longer? Knowing the late frosts we can get here in the north of the Lot, I think I will err on the side of caution. Other plants are definitely showing signs of life, buds are swelling and blossom is opening. When it is a bright sunny day you can almost feel the urgency in the plants.

It has also been a glorious, yellow day. I am convinced that the forsythia growing here is a deeper shade than the English variety, the daffodils are still putting up a good show and the mahonia is breaking into flower. The cowslips are doing well, as are the celandines. Yes, I know they are weeds, but they are totally impossible to eradicate, so all the time they shine out from under the Judas tree, why should I try. The flowering dogwoods (cornus mas) in the lane are finally dropping their little yellow flowers, but it looks as if we may get a good crop of cornelian cherries from them again this year. The jelly made from them is superb with cheese or cold meats. I discovered the fruit by quite literally stepping in to a pile of them while walking the dog a few years ago, and after a lot of web searching I found that the fruit is much used in the east of Europe for making jelly, so I had a go. I will post a recipe later in the year when the fruit is ready if anyone is interested.

Yes, a satisfying day – now all I need is for the strange ache between the shoulder blades to ease off. 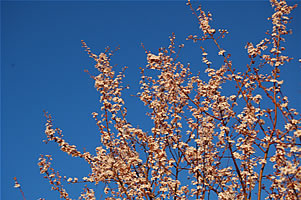 Hints and Tips for April

In the flower garden, deadhead the daffodils as they finish. This will ensure that all the energy collected by the leaves will be stored in the bulb for next year. The leaves should be allowed to die back naturally – otherwise you starve the bulb. Daffodils will sometimes “go blind”, that is not flower. This is often caused by overcrowding of old clumps or too shallow planting, so mark the clumps and be prepared to splint and replant in the Autumn. Cut back the rose bushes, cutting out all thin and crossing branches, to leave an open centred bush. Cut the main growths back to around 30 cms, cutting to an outward facing bud, then give them a good top dressing of rose fertilizer. Look at the shrubs – as they come into leaf is an ideal time to see any dead wood that wasn’t cut out last Autumn. Shrubs that flower on the current seasons wood can be trimmed now. If you aren’t sure about this just keep an eye on them – if the flowers appear on wood that grew last year, they can be trimmed after flowering, if they appear on wood that grows this season, they should be trimmed next Spring. Wait a bit to cut back the old growth on fuchsias and hydrangeas as this protects the young shoots from late frosts.

The vegetable garden – hopefully we can now get on the ground without needing a JCB to pull us out, so for us in the northern Lot it is time for planting onions, shallots and garlic. Old English gardeners always planted their seed potatoes on Good Friday, and it is not a bad rule here. Equally leeks, cabbage plants etc can go out. 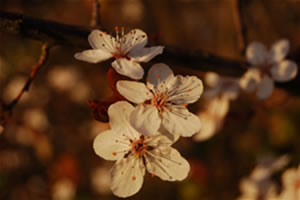 If you have not long acquired your plot, may I put in a plea? Edwardian gardeners would do little in a new garden for a year, so that they could see what the previous owners had planted. Most of us don’t have that patience, or the army of gardeners that would be required to cut back the jungle that would grow if we tried it in this climate. However, try to leave an area if possible. Our daughter and son in law bought a house not far from us a few years ago, a large part of which is on a very steep slope. As they did not own a strimmer at the time it was left to grow throughout May. The result was the most amazing display of wild orchids. Now they simply strim a pathway through it, and last year we counted eleven varieties of orchid. So you never know what may come up!

On April17th we enter a new lunar month, here known as la lune rousse, or scorching moon. After a clear night the old gardeners would find the new shoots on plants scorched and as the sun wasn’t shining, it had to be the fault of the moon! O.K. you say, clear night = frost, but the same has been noticed on cloudy nights. If my translation is correct, scientists have shown that the energy put out at night by young shoots can be so high that the plant temperature can be lower than the ambient air temperature, and they will still freeze even on a cloudy night. In other words, beware of late frosts and don’t be tempted to put plants out too early. 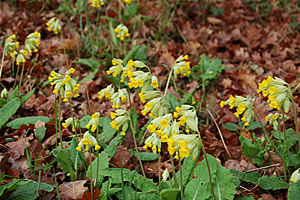 Gardening on heavy, clay soils is never easy, but it can be done. In the early spring when it is wet it is best to stay off the ground altogether, the main work in “treating” heavy soil being done in the Autumn, when it is ploughed or dug, depending on the area, covered in barley straw or leaf mould and left for the winter for the frost and worms to do all the hard work. Now it is a case of doing the best you can – and suddenly realising that you have back muscles. Our local dechetteries compost all the municipal hedge trimmings etc, with the garden waste that people leave and it is possible to collect it free. I’m not totally convinced as to how well composted it is, but it makes an wonderful base for your own compost heap, and well rotted compost is one of the best soil conditioners you can have. It may also pay to get a soil testing kit – if you can’t find one locally, get someone in England to post one down – they don’t weigh a lot, – and find out if the soil is acidic. Very often clay soils benefit from liming.

Our plums trees have had a huge show of blossom this year so we hope for a good crop later on – the blackthorns in the hedge rows have also done well, so if you fancy making sloe gin in the autumn take a note of where the trees are. The peach trees (small pink blossom on leafless twigs) have finished, and the pear blossom is just beginning to show colour (white flowers on twigs that are just growing leaves). We also have a quince tree thinking about blooming – it never bears very well, but I love it for the blossom – large, up to 3 cms flowers of the most beautiful shell pink, with young leaves that are positively downy on the under sides.

I find it fascinating that in the Quercy / Lot area we have such a wide variation in climates – my lily of the valley is just showing, hopefully we shall have flowers by May 1st (it is THE May day flower for the French) and yet further south it is already out.

We have finally got the veg garden rotovated, so planting is going on a pace, as is the lawn mowing – twice a week is NOT normal for April!