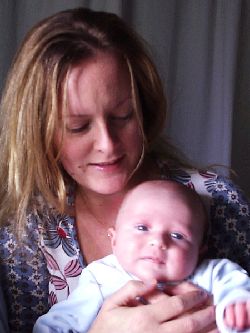 My daughter, Lily, was born on 29 September at the Clinique des Emailleurs in Limoges. I was not resident in France at the start of my pregnancy and for three full months straddled the two health systems of England and France. As a result, I now have a fair insight into some of the differences between the two systems and can provide some (hopefully useful) information to those who find themselves embarking on having a baby in France.

I don’t profess to be an expert of any kind and Lily is my first child, if any readers have had other or different experiences to report or have further advice, I would be grateful to hear of this and to incorporate it into a second article on the subject. I will also be covering the ins and outs of registering a birth so as to enable full British citizenship, this being our current challenge….back to the pre-birth stage:

It struck me fairly early on that the system here is much less “touchy feely” and far more “medicalised” than the one offered by the NHS. Certainly, rather than being furnished with lots of information upon which to make my own choices, I was set upon a course that was prescribed by others and the room to exercise any freedom of choice was limited indeed.

I was also surprised to find out that the opportunities for “natural” birth are more or less non existent here. Perhaps I was looking at the forthcoming birth through rose tinted spectacles but I had hoped for some flexibility in this regard…….the nearest facilities for water-births are in Toulouse, home births are uncommon and “natural” births are almost unheard of. All in all the process is fairly clinical.

The Declaration of Pregnancy

The formal process starts with an official “Declaration of Pregnancy” which must be made by your doctor and by the 14th week of the pregnancy. Your doctor will also refer you to a gynaecologist for an examination.

As to where you will be referred, in Limoges there are two possible places, the Clinique des Emailleurs or the CHU. As a general rule it seems that for those women who are fortunate enough to be having a problem free pregnancy with no history of problem pregnancies, the choice is the Clinique. Where there are medical issues the referral is likely to be to the hospital.

My feeling is that the Clinique offers a more “cosy” or “personal” choice for those who are lucky enough to be trouble free. The CHU caters for the cases that require more medical attention and certainly for all cases of premature babies…..more about the birth later.

You must attend seven antenatal examinations with your appointed gynaecologist, that is one each month from the third month. Each of these appointments will be followed by a series of blood tests which can be done either at a laboratory or in the comfort of your own home by your local nurse. At the eighth month you must also attend a consultation with an anaesthetist…though note, this is not so that you can explore the type of anaesthetics available, but to determine your suitability for an anaesthetic. In terms of pain relief available there is no choice, it is an epidural, or nothing!

There will also be a minimum of two sonographs. One at around the third or fourth month and another around the eighth month.

The preparation for birth takes place from the sixth month under the guidance of midwives. There are three or four midwives who work exclusively with the patients of the Clinique and who offer different kinds of preparation ranging from the traditional to the one in which I participated – preparation in water – I had to get into the water at some point during my pregnancy!

There are eight sessions available (to those who can make all eight – I made seven before Lily arrived!) covering a range of preparation techniques, breathing exercises, information about the maternity facilities available, guidance on how to prepare for the arrival of a baby and other matters such as breast-feeding.

It is not expected that the father-to-be (or prospective birth partner) will participate generally in the pre-birth preparations. The only session which my husband could attend was that during which we were able to see the facilities available in the maternity suite. I believe the system in England is very different with many fathers-to-be attending the ante-natal sessions provided for example by NCT.

A bed in the birthing suite normally becomes available once your contractions are at regular 5 minute intervals. More unusual cases are catered for and I was one of these being hospitalised almost immediately following broken waters and no contractions whatsoever!

Whilst in labour you will be cared for by a midwife and her team of auxilaries. You will not be her only patient and so may spend many long hours alone or with your partner of choice. You may also, if you choose to have an epidural, see an anaesthetist. Only if some form of medical intervention is required will you be likely to see a doctor.

Without going in to too much detail I can say that although very (in my opinion) “clinical” Lily’s birth was magnificently handled by the medics on duty and it would not be possible to fault the care that I received.

How much does it cost?

As with all healthcare in France the maternity procedure must be paid for in its entirety and then reimbursed by your social security provider and your insurer. It is not cheap with the total cost reaching around 3,500 to 4,000 euros. It is therefore very important that you have top-up insurance to cover the costs of maternity although from the sixth month onwards most of the costs will be 100% reimbursed by your social security provider.

Once you are free from the confines of the hospital bed and back in to the swing of normal life chez vous you will have to attend check-ups for both baby and mummy. There is a check-up for the baby at one month and at six to eight weeks for mummy. The baby’s check up can be with your own general doctor or with one of the hospital paediatricians. The mother’s check up should be with a gynaecologist.

Lily has just had her two-month check up and now weighs in at an arm-breaking 4.7 kilos.