The best apps for learning French 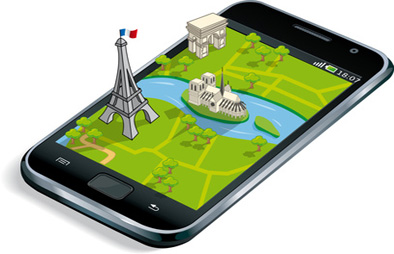 These days, language learning apps for smartphones and tablets can be the easiest way to pick up a foreign language. Many are free to download, including Duolingo which currently has biggest following. With visual aids and a focus on repetition of vocabulary, it also holds your attention by adding levels and competitions, making it feel more like a game than a educational app.

Another popular app is Busuu, which is the world’s largest language-learning social network. Study material is broken down into units consisting of multiple-choice questions, and speaking and assignments. The social media aspect is that users can act as both students and tutors, correcting each other’s work and communicating via chat-window, or audio or webcam connection.

By far the top-recommended digital resource is the Michel Thomas method, which claims to teach you the same level of French in three days that you would learn in two-to-three years in education. A bold claim – but celebrities from Eddie Izzard to Emma Thompson swear by it, as well as Grace Kelly, who had to learn French quickly following her engagement to Prince Rainier of Monaco.

The method is all audio based, with no books or emphasis on memorising or writing. It breaks language down into its smallest components, teaching the building blocks for forming sentences correctly, quickly and efficiently. I asked our forum members for their language learning advice, and the response in favour of Michel Thomas was overwhelming. They also referenced Duolingo.

Here’s what our forum users said…

noblesse: ‘Michel Thomas – all the courses, especially the ‘advanced’ course. I listened to it time and time again, in the car, when decorating and gardening, etc.

I did take French as a child and then Latin, but I never really learned French at all until MT. The ‘listening’ approach, with no written homework works because you need to be able to understand what people say to you and they don’t often give you an opportunity to write it down!

I also read the French newspapers online, listen to French radio (my favourite is Europe 1) and watch French TV (with headphones so that I hear the words clearly), and also listen to French music.

As I don’t live in France full time I don’t have as many opportunities for speaking as I would like, but at least when someone replies at full speed to a simple query I know what they’re saying!’

chancer: ‘I really appreciated the Michel Thomas course 1, it really upped my game at a time I really needed help, I got the 2nd course but found that it was too big a jump for me so I didn’t use it. I still have it somewhere so I will try it again, I am fairly sure that my French now is well ahead of that but it will be good revision and there will be a lot of good tricks.

In my opinion the value of Michel Thomas is imprinting, he uses a lot of psychology and hypnosis techniques, you are to be relaxed, have a glass of wine (I no longer drink) and the phrases do indeed become imprinted, I often hear his voice in my subconscious when I am compiling a phrase.’

happy1: ‘The only app that I have found useful was Duolingo and that suited me. Everyone learns differently.

But it’s the phrases you need to know. One of the books I found useful was the Harrap’s Slang.’

What are your language learning tips? What software has helped you to learn French? Let us know in the comments section!

Previous Article Inside Tips: Speak French Like a Native
Next Article New EU Succession Law and Its Implications on Inheritance Tax