First published: 1st May 2015 by FrenchEntrée 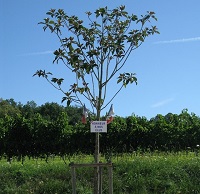 A relic of tree worship in Dordogne

In certain towns of SW France, you may notice tree branches tacked on to the front of local businesses along with a couple of small tricolore flags and a sign annoucing that a tree has been planed in honour of a person or, more commonly, in honour of employers or elected officials – ‘Honneur aux Patrons’ or ‘Honneur aux Elus’.

In Sarlat in Dordogne, these displays go up on 1 May and stay there until the greenery attached to them is refreshed 12 months later. So no matter when you go, this is one tradition bound to get noticed.

Like the US, France has an annual celebration of workers’ rights. Both take place on 1 May but instead of Labor Day as it is known in the US, the French call it la Fête du Travail or le 1er mai.

The month of may has been associated with vegetation and rebirth since antiquity. Le mai is also the name given to the tree (usually a pine) from which a couple of branches are removed and displayed outside a local business by the people who work there, in honour of their boss. In a return show of respect, the employer rewards employees with an apéritif.

Although branches from le mai are cut in May (mai) the name also has associations with Maïa who was the Roman goddess of spring.

Apart from the mais aux patrons, le mai is also used to celebrate a couple getting married. In this case, branches would be attached to the outside of their house with a sign that reads ‘Honneur aux Mariés’.

Another occasion when it might be appropriate for a group of people to show their loyalty with le mai is during local elections. In doing so, voters can remind candidates of their duty to do well by them.

Across France, la Fête du Travail more generally involves the exchange of sprigs of lily of the valley (muguets).