The Art of Living in Provence

Even on a relaxed and balmy June Wednesday morning high in the ageless hilltop Provence town of Vence, when most are settling down for their first café au lait of the day, your writer is soaking up important facts and bon mots to dispense on these very pages. It’s barely 10am and I’ve already learned that Vence has the smallest cathedral in France – pub quiz fans, take note.

My guide points upward to a sign. “This was the town’s first ever hotel, dating back centuries,” she announces. The sign reads ‘Lion d’Or’. This confuses me. “What did a golden lion ever do for Vence?” I wonder as I translate, then glaze over.

“It’s called this because all those years ago, many people couldn’t read,” she adds. “So they used a painting of a golden lion instead.”

I’m still at a loss. “Au…lit…on…dort,” she repeats slowly, twice, urging me to twig. Finally the centime drops – the phrase refers to a place where people go to sleep, and the image made things obvious for the uneducated. So if you ever come across a hotel in France called Lion d’Or, now you know how it got its name.

All of which brings me to the reason for my Provence jaunt. It is, in theory, a trip to explore the region’s rich artistic and creative heritage, from Matisse’s exquisite chapel in Vence to Renoir’s stunning studio and gardens on the coast at Cagnes-sur-Mer. The glassware of Biot gets a look-in, too, as does Maeght’s Foundation.

After the Vence hotel sign has been fully explained, we head along to a stunning vue panoramique, sheltered by a 1538 ash tree. From here Matisse’s architectural – and spiritual – legacy is plain to see in the distance, nestled in a suburban street on a wooded hillside. Vence nods to other key painters who found inspiration in the clear light and gentle air of the Riviera, with four lecterns dotted around town on the ‘Route des Peintres’ circuit.

This loosely defined route is a bright tourist board innovation aimed at showcasing the calibre and diversity of artworks displayed and created here. Raoul Dufy’s Vence Fountain is one such piece, located on Place Anthony Mars but there are dozens all over the Riviera. If you love art and Provence, planning an entire itinerary based on this theme is manna from heaven.

As for me, after a wander through Vence’s compact and cute side streets and a salad lunch on a quiet square, it’s off to pay cursory respect to Matisse’s masterpiece. The Rosary Chapel, with its blue and white tile roof and wrought-iron cross is striking externally but inside is where the beauty kicks in. Solid white walls and floors are brought to life by yellow, green and blue stained glass windows. Majestic in its simplicity and a haven of calm if you choose the right moment, it’s a must-see.

A Tale of Two Towns

Vence, a small, homely town with great restaurants and quirky shops, is an ideal base for touring the wider region. I am lucky enough to be staying in the delightful, flower-covered Villa La Souleiade, whose distinguished owners M. et Mme Legrand are only too happy to offer tips on great places to visit, dine and even avoid! Their insanely friendly hound Diva is also most welcoming but she had to stay behind as the next morning I shunned pool-time and ventured off to nearby St-Paul de Vence.

Although only a few minutes away, St-Paul is vastly different in feel and atmosphere to its near-namesake neighbour. It has a much more affluent air and an almost overwhelming concentration of art galleries. It’s the pricier, bling sister of Vence, which is much more down-to-earth and low-key.

Whereas the fruits of oil paint-based labour today attract the rich and famous, it was once olive oil that dominated the land around St-Paul. Producers supplied the soap factories of Marseille, while the rose and orange blossom from the hillsides was sent to Grasse for perfume production.

My first appointment is with rock royalty. In the sun-dappled courtyard of the famous Colombe d’Or restaurant, an exclusive address adorned with its own fair share of original artworks by the likes of Picasso, I’m ushered in to have a chat with Bill Wyman. The former Rolling Stone and ex-resident of Vence is very much at home here as he talks to the press about his photo retrospective being held in the town, which he will launch later with a special concert by his band The Rhythm Kings. 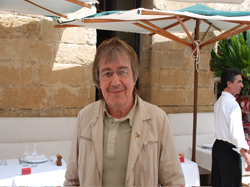 We talk about his love of photography, his friendship with artist Chagall and an abiding passion for Provence, first instilled when he was in Villefranche-sur-Mer for the group’s Exile on Main Street sessions. “I came here to the Colombe d’Or in April 1971 and brought Elton John here. I loved the food, the atmosphere and the light at 6 o’clock,” he says with fondness.

After wishing Bill a good gig (it was actually great – I was invited along), and having a preview of his exhibition, I join a guided tour of the higgledy-piggledy old town, which leaves me in no doubt as to St-Paul’s artistic credentials. Modern masters Picasso, Braque, Léger and Chagall all came here, inspired by the colours, flowers and – then, at least – the quietude. Such tranquility would be hard to find in summertime these days but there’s no questioning the town’s pristine presentation. 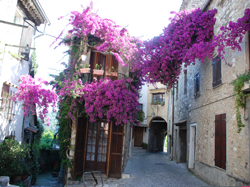 To Biot and Beyond

Next day I head to Biot, another quite delightful old village with an artistic streak, for a quick visit to the National Fernand Léger Museum. The multi-medium avant-gardist was a contemporary of Braque and Picasso in Paris in the early 20th century and his stark, colourful style of painting covers several distinct periods. The museum is housed in a huge building set in lush grounds with murals everywhere, including a massive portrait on the façade.

It’s said that Léger was drawn to Biot to work in ceramics – the area is naturally rich in clay, sand and manganese which lend themselves to this sculpture form. There is also a big glassware scene here that dates from the mid-Fifties which has inspired a Chemin des Verriers (Glassmaker’s Route), as I witnessed on a steamy tour of La Verrerie de Biot, a family-run outfit pecialising in hand-blown bubble glass. The craftsman’s touch is a delight to see up close, while the colourful glasses and vases on sale in the shop have visitors reaching for their credit card.

A rapid tour of Biot village brought all I expected from a sleepy Provençal hideaway: gorgeous cobbled alleyways, bustling small squares and, at boutique shop Le Mas Des Orangers at least, all manner of fabulous local produce. You can try and buy all manner of wonderful perfumes, soaps, tapenades and vinegars. Again, perfect gift potential.

Lunchtime is upon me, and there is only one place to head for a truly spectacular outdoor bite. Château St-Martin back in Vence is an exquisite luxury hotel whose outdoor L’Oliveraie (The Olive Grove) grill conjures spectacular fresh dishes before your eyes – I opted for shrimp Caesar salad and a couple of glasses of local rosé. What could be more idyllic? (For proof of the place’s relaxing qualities, witness the particularly smug photo taken at lunch currently being used as my Editor’s shot.)

The final stop of my artistic tour of the Riviera brings me to Cagnes-sur-Mer. The old port not far from Nice offers pleasant stony beaches, a fine promenade and some lovely shopping streets but for a real blast from the past I head up to Haut-de-Cagnes. Known as Le Village des Peintres, it has welcomed some heavy-hitters in its time: JMW Turner, Monet and Renoir, one of the founders of Impressionism, were all lured here and my wonderfully passionate guide urged me to imagine the main square packed with painters selling their sketches back in the day. Apparently the village was also the place to be seen from the mid-Sixties onwards, counting Brigitte Bardot among its famous residents and film stars swarming to its swanky nightclubs.

Today Haut-de-Cagnes, a stunningly quaint and beautiful village frozen in time, boasts 12 Route des Peintres lecterns, and two more on the opposite side of the valley where Renoir set up home and workshop. My visit to this beautiful old house coincides with a serious bout of painting by accomplished amateurs in the house’s lovely grounds. Inside the house, which serves as a museum, there are 11 original works and the painter’s perfectly preserved studio.

Like Renoir and the rest who made this corner of France their home, art draws you to Provence. But it’s the laid-back atmosphere, peacefulness and art de vivre that provide
the most enduring brush strokes.

Previous Article So You Can’t Pay Your French Mortgage
Next Article The truffe is out there!