The truffe is out there! 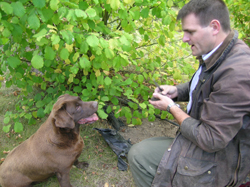 A brunette called Angy is sniffing around my feet with her big, wet nose. Her bottom in the air, she’s wagging her tail furiously. There’s got to be a huge truffle down here somewhere.

Sure enough, seconds later this eager Labrador starts scrabbling at the soil and whining loudly. Her owner, Benoit Jacquinet, leaps into action, pushing Angy aside and unearthing a knobbly brown fungus just a few centimetres beneath the ground. At first it doesn’t look like much, but when he slices into the truffle with his penknife you can see the white, veiny flesh beneath. A tentative sniff reveals its nutty flavour.

Angy is the perfect truffle hunter. Specially trained by her owner to sniff out Burgundy truffles (or tuber uncinatum, to use their Latin name), she will regularly forage during the season, between September and December. On his farm, in the Champagne region, Benoit has planted an orchard of 4,500 trees designed expressly to promote the growth of truffles in the soil near their trunks. On a good day, he and Angy will dig up 1.5 kilos of fungus. The largest single truffle he’s ever found on his farm weighed 130g.

I follow master and beast as they scurry up and down the rows of trees. Planted a decade ago, in terms of truffles, they are now in full fruition. Mainly hazlenut, but also oak, black pine, lime, beech and hornbeam, they stand several feet apart so that the breeze lifts the truffle aroma from the soil straight into Angy’s nostrils. Early morning dew brings out the smell even more.
Benoit and Angy make a great team and they’ve both worked hard to fine-tune their skills.

As well as investing in his trees, Benoit spent many months training Angy to forage. Occasionally he hires her out to other truffle farmers for €20 an hour, or half of any booty she finds. He had hoped Angy’s natural truffle skills would have passed on to the next generation. But despite trying to train Angy’s puppy Venus for the last five years, so far not a sniff.

Suddenly, Angy emits a little yelp. Benoit immediately reaches for the soil beneath her nose. But this time it’s a false alarm. Angy has found a tasty hazlenut, which she proceeds to crack noisily between her teeth. Her owner is annoyed that she’s not concentrating on the task at hand and scolds her.

DIAMOND OF THE KITCHEN
Throughout the rest of the morning, Angy makes up for her distraction, unearthing dozens more truffles, some tiny, others quite substantial. By the time I leave Benoit, he has amassed around a third of a kilo. Given another hour or so, they will have about 1.5 kilos of fungus.

Although he still owns a 75-hectare arable farm, Benoit’s main business is his hotel and restaurant, Auberge des Moissons, just across the road from his truffle plantation in Matougues, a village in the Marne department. A weekly crop of 1.5 kilos of Burgundy truffles is enough to keep his kitchen well replenished.
The night before our truffle forage, we dined in his restaurant on specialities such as truffle butter on toast, pasta with truffle crème fraîche, truffle omelette and truffle cheese, all washed down, of course, with the best local Champagne.

Given their rarity, truffles are big business in France. Christened ‘the diamond of the kitchen’, they have been highly prized since before the Romans were in charge. According to Michel Courvoisier, director of the Fédération Française des Trufficulteurs, there are over 20,000 truffle farmers in France. Last year they unearthed around 60 tonnes. The majority (32 tonnes) were Périgord truffles and tuber brumale, followed by summer truffles at around 20 tonnes. But a substantial number in the north of the country, like Benoit, opt for Burgundy truffles,
with around six tonnes in an average year.

Prices vary enormously depending on the quality and the export market. On average, Périgord truffles and tuber brumale have an export value of around €440/kg, Burgundy truffles €200/kg, and summer truffles €40/kg.

Most farmers use dogs to search out their prize, since they can be trained so well. But pigs are just as effective. The problem is they love truffles so much that it’s a job to stop them gobbling them up straight from the ground. Apparently there’s a compound inside the truffle that smells very similar to the sex pheromone of a male pig, driving the females wild.

While Benoit’s Burgundy truffles aren’t as valuable as the Périgord variety in the south of France, or the pantalon-wettingly expensive white truffles of northern Italy, he claims he could sell them for between €300 and €450/kg in the local market. Angy’s nose ought to be insured.

THE PRICE OF PERFECTION
But not for as much as the nose of an Italian dog called Rocco. Back in 2007, Rocco and his owner Luciano Savini unearthed a single white truffle near Pisa, in northern Italy, weighing 1.5kgs, which they later sold to a Chinese casino manager for a record-breaking £165,000. It’s believed to be the record price ever paid for a single truffle.

Benoit laughs when reminded of these obscene prices. “It’s all because of a myth that has been built up around truffles,” he says. “The problem is that people are more interested in discussing the price of truffles rather than their cuisine. When they do cook with them, it’s just tokenistic. They say: ‘I’m going to make a truffle dish, and they slice off the tiniest bit of truffle just so they can say it’s got truffle in it. That’s just not right.”
Indeed, Benoit certainly doesn’t scrimp when he prepares truffle dishes in his restaurant – €3 will buy you 10 grams of truffle spread across the various dishes of your meal.

“I don’t like the way truffles are almost in the same category as caviar,” he adds. “Remember, it’s just a mushroom we’re talking about. Granted, it’s a very rare mushroom whose cultivation you can’t really control. But it’s a mushroom all the same. In the past when rural people found wild truffles, they would cook with them all the time. Nowadays, they’ve become so refined that they are almost like saffron. For a truffle-lover like me, that’s a shame. I personally think they cost too much.”

Although Burgundy truffles of course attract business to his restaurant, Benoit says his decision to cultivate them was more down to culinary taste than money. In the future he hopes to sell the odd bit of surplus but for the moment 100 per cent of his crop is served in his restaurant. “When I hunt for truffles, I do it for the excitement,” he explains. “It’s a bit like hunting for animals. There’s this relationship between the hunter, the dog and the quarry. Each time Angy finds a truffle, I always wonder if this time it will be a big quarry. As she starts to dig, I find myself hoping for the big prize.”

More information
● Dominic Bliss stayed at the Auberge des Moissons, Route Départementale 3, 51510 Matougues; 00 33 3 26 70 99 17;
www.des-moissons.com. Double rooms start at €82 per night.
Between October and December, for €240 per couple you can
truffle out with a night’s stay in the hotel, a truffle presentation,
a truffle hunt with Angy, and a five-course truffle dinner.

● Travel from London St Pancras to Troyes via Paris on Eurostar
www.eurostar.com) and SNCF from £89 return.

Previous Article The Art of Living in Provence
Next Article In the dog house!