Eleanor Fullalove meets a couple living the good life in France. They run kennels in Normandy. 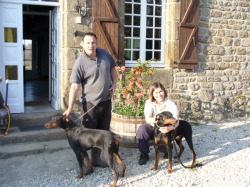 Names: Rick and Tracey Harwood
Age: 51 and 44, respectively
Where do you live? On the outskirts of a village, Lonlay l’Abbaye, in the Orne (Normandy)
When did you move? About three years ago
Where did you move from? A village in Hertfordshire called Ridge
Occupation: We run luxury kennels for dogs
What were you doing previously? Rick was a betting shop manager and Tracey worked for a government institute that regulated medicine worldwide.
Contact details: Les Chenils du Lonlay l’Abbaye, La Bouvetière, 61700 Lonlay l’Abbaye
Tel. 00 33 (0)2 33 65 62 20

What first attracted you to life in France?
We had visited France many times over the years – Tracey had made French friends (student scientists) at work. Many lodged with us in the UK and we visited them and their families in France, so we had a pretty good idea
of what life would be like.

What preparations did you make before you went out?
We read all the magazines and all the books about France, watched every edition of A Place in the Sun and took French lessons. The one thing we were not going to do was keep a bolt hole in the UK. So many people do this and it gives them an easy opportunity to go back if things get a bit difficult – from reading about other people’s experiences, we knew there would be hard times ahead. We were lucky to sell our property in the UK at the height of the market.

What do you do?
At the moment we look after dogs in our home, but we have to turn people away. We are building kennels to increase the number of dogs we can look after. Five treble size kennels are almost finished. They will be doggie hotel standard with non-slip tiling inside and out, under floor heating, decorated walls, insulated walls and home standard doors and windows. We hope it will be a new standard of kennels that others will copy. We hope to be open for the Christmas holiday period.

Where do you live? Describe your property.

It’s an old farmhouse dating back to 1663 with 10 acres of pasture surrounding the house
and barn and only farmers for neighbours.

How did you go about finding your home? Was it a long search?
We made an appointment with some local agents, booked a hotel for a couple of weeks and started house hunting. The first property we saw was absolutely perfect – an old farmhouse already set up for horses, on a bridleway between Paris and Mont St Michel. The only problem was that it was way above our means. After visiting too many houses to mention, none of which matched up, we decided to make an offer on the first one we saw. Despite being way below the asking price, our offer was accepted!

Did you have to do much work on your property?
The previous owners had neglected the property to concentrate on setting the fields up for their horses. After three years, we are still making lists of jobs to be done, but it’s good fun to be living in such a characterful old house.

Could you speak the language?
Our nearest farmer told us that anything we had learned was next to useless. Being so far out in the sticks, a kind of patois is spoken… It’s a bit like a Scotsman trying to understand a Cornishman.

What have been the main challenges about the move? In hindsight, would you have done anything differently?
Learn French to a semi-fluent standard before coming over. We get by okay but still have a long way to go before any decent conversation is viable. 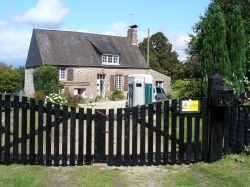 How have you benefited from the move?

We get up knowing that every day will
be different from the one before. It sounds odd,
but sometimes we don’t know what day it is!

Have you found it easy to integrate into French life?
We have made some great friends in the village and there is a real community spirit here.

What are the differences between life in France and life in Britain?
Despite a cut in income of about two thirds, our standard of living is so much higher.

Most days start with sorting the horses and chickens out and any dogs that we have staying with us, then we sit down to breakfast together, something we didn’t do in the UK for over 20 years. Then we walk the dogs along the local chemins. We lunch together unless one of us is away pet sitting.

Do you have any amusing anecdotes of your time in France?
All the magazines advise you to visit the local mairie and introduce yourself, so we popped into the mairie the first week. We explained that we had just moved in and wanted to say hello to the mayor. We were shown into the mayor’s office, but he spoke not a word of English, and for some reason didn’t understand a word of our French.

After much blank staring at each other, he picked up the phone and we understood that he was calling his daughter, who spoke English. We waited while he dealt with other villagers. Then the mayor’s daughter turned up with wringing wet hair, having been in the shower when her father phoned and driven 20kms only to be met by two English newcomers who just wanted to say hello. We were so embarrassed! However, the mayor’s daughter was wonderful about it and we all saw the funny side. We always end up at the mayor’s table at local fêtes – it certainly got us noticed.