Christmas Decorations with a Touch of French Tradition 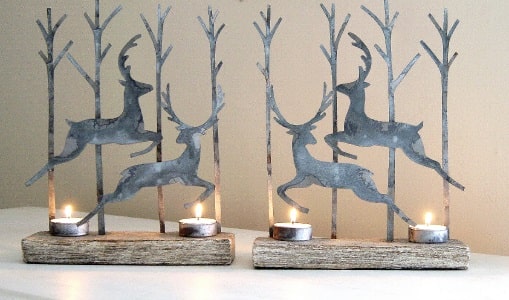 Twinkling lights, shiny stars and festive candles. Time to dust down the Christmas decorations and prepare the house for the coming season. Once the tree lights have been untangled and promises made to store them properly in the future, the decorating begins. This could well be a chance to add a touch of Parisian style or chateau chic to the event and also be aware of some of the French traditions. From the beginning of December, Christmas markets are held in many French towns and the streets are lit up with cheery sparkling lights. This might therefore be a good time to make a start in the home although traditionally it would be left until Christmas Eve. 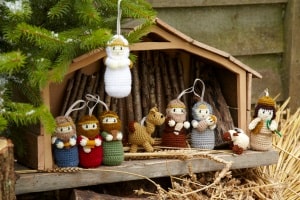 The Crib or Crèche

In France an important part of Christmas is the creation of a crèche or crib. The idea dates back to the 14th century in Avignon, introduced by St Francis of Assisi. By the 16th century they were popular all over the country and still are today. The crèche represents the manger in the stable at Bethlehem with the figures of Mary and Joseph and of course the baby Jesus (who is placed in the crib on Christmas morning). In Provence small figurines or santons representing people of the village were originally made to be included in the nativity scene. These little trinkets have now become highly collectable. Many churches, villages and market places have their own versions of the crèche, some of which include live animals. 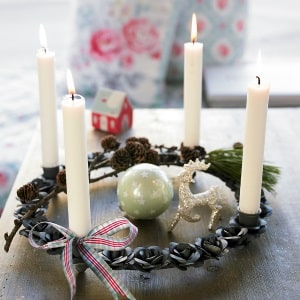 A Festive wreath hung on the front door can be very welcoming for guests. Round, oval or heart shaped, shop bought or homemade. Add pine cones, ribbons, fruit, nuts or just about anything that takes your fancy. Just remember to tie it securely! The French tradition is for a wreath which is placed on a table. Usually made from green foliage with pretty ribbons, the wreath will contain four candles. On the Sunday which falls four weeks before Christmas, one of the candles will be lit. Each Sunday thereafter leading up to Christmas another candle is lit. It is said that the four candles represent love, peace, joy and hope. 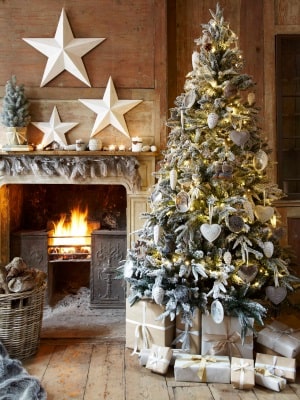 The Christmas tree likes to be the focal point of the room but sometimes a well decorated mantelpiece can challenge it for centre stage. If you choose a real fir tree, an artificial one or a contemporary alternative, there is plenty of scope to add your own French style and make it truly special. It is interesting to note that the Christmas tree was first introduced to France in 1837 by Princess Helene de Mecklembourg when she married the Duke of Orleans, heir to the French throne, although the first one appeared in 1521 in Alsace when it was still part of Germany. Traditionally the tree would be decorated with ribbons and candles with a star placed on the very top. French children place shoes under the tree instead of hanging up a stocking hoping for Santa (Père noël) to fill them with presents.

I like the idea of keeping the French Christmas traditions but with a modern twist. The main thing is to create a warm and welcoming atmosphere for you and your friends and family. Wherever you spend Christmas make it a magical time. Remember that memories will last well after the decorations have been taken down.
Frenchichandshabby
www.frenchicandshabby.com

All pictures by kind courtesy of ©Pressloft

Ann Horne is an interior stylist and long-time FrenchEntrée contributor. She runs Frenchicandshabby, a site created to find beautiful French style furniture, furnishings and accessories for the home.