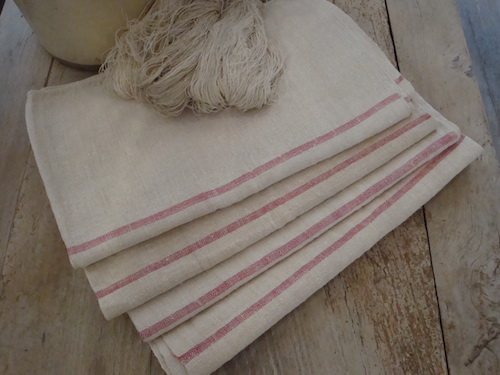 Beautiful linen once formed part of the trousseau for young girls. Even if they didn’t know when or indeed if they would marry, certain items (usually carefully wrapped to protect them) would be placed in a wardrobe or chest in readiness for the big day. They would often be embroidered with the initial of the future bride-to-be and once a husband had been chosen, his initial would be added to hers. It would therefore be a bit sad (although rare and probably expensive) to find antique linen that has been monogrammed with only one initial! Wealthy families during the 19th and early 20th centuries may have commissioned the nuns from the local convents for their embroidery skills.

No trousseau would be complete without at least one set of sheets. The material chosen and quality would depend on the family circumstances. Country folk and people with limited funds found hemp to be a good choice. It was relatively cheap because it was easily grown and turned into fibre for weaving. The looms they used at the time were quite narrow (less than a meter wide) and antique hemp sheets that are found today are likely to have a seam down the middle where two lengths were sewn together to be able to fit the bed. Washing the hemp usually changes the original dark beige colour to a lovely creamy white and also helps to soften the weave.

‘Fil’ linen sheets were very popular in the 19th century and also woven on narrow looms but unlike hemp, the weave tends to get tighter the more they are washed. Although quite heavy to handle, they can be boiled, washed and either hung on a line to dry or if you really want to give old traditions a try, laid flat on the grass in the sunshine to bleach naturally! Repeated washing will also help to lighten the colour and soften the linen which can be a bit course with uneven ridges. There is usually a pair of initials in one of the corners which have been cross-stitched in red. Again this takes us back to the young bride-to-be and her husband. 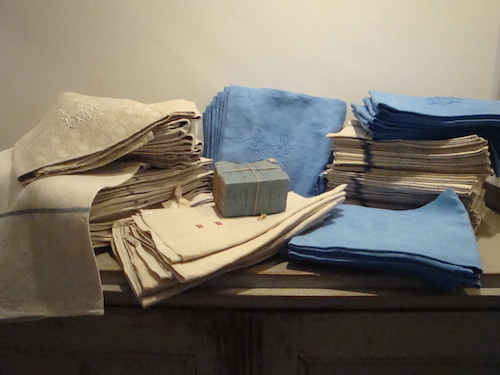 Métis sheets aptly named after the French word for mix are made from at least 35% cotton and the rest linen. First available in the 1900’s they were woven in large factories on bigger looms which were then able to produce wider widths of cloth. Hence there was no need to sew two pieces together. They were designed for heavy duty wear, much easier than linen to wash and iron and certainly not so heavy. The customary creamy ivory-white colour of métis gets whiter and softer with frequent washing. Quite often they are monogrammed and the edges finished in ‘ladderwork’ or sometimes lace inserts.

The French linens of yesteryear have now become collectable antiques of today. Not by any means limited to sheets. Beautiful napkins, aprons, chemises and tablecloths are all out there waiting to be discovered. For those who are nimble with needles and thread, some can be transformed into curtains, pillows, cushions and even upholstered furniture.

A trousseau is basically a collection, probably added to over several years, hidden away in cupboards until the right time comes. I think we should consider making our very own collection of antique French linens not to be locked away, but instead displayed, cherished, used and definitely enjoyed every day!

Ann Horne is an interior stylist and long-time FrenchEntrée contributor. She runs Frenchicandshabby, a site created to find beautiful French style furniture, furnishings and accessories for the home.