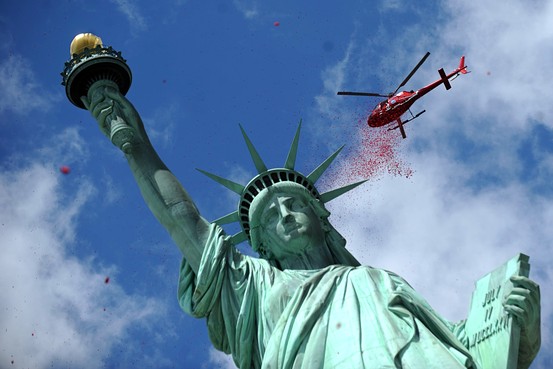 The organization “The French will never forget” arranged for helicopters to shower 1 million red rose petals over the Statue of Liberty.

They explain the idea this way:

“On June 6th, 1944, starting at 1:00am 17,000 US Paratroopers were dropped behind enemy lines. At 6:30 am 73,000 US Army troops engaged in the largest amphibious landing in history. By the end of the Day the liberation of France had begun and 2,500 young Americans had made the ultimate sacrifice.

As a homage to these heroes, and to the estimated 180,000 others, who also made the ultimate sacrifice for the liberation of France with critical help from the French authorities we planned a fitting, grandiose and moving tribute on June 6, 2014, focusing on the worldwide symbol of liberty. Once more, the French people express their gratitude to America, their oldest friend and ally, for their regained freedom.”

The nonprofit worked with state officials and the US Coast Guard and spent roughly $100,000 to stage the event, which included counting and refrigerating the petals, which weighed 1,200 pounds.

As Associated Press reported, “a French military frigate, the Lafayette, was moored near the statue, which was a gift from France. Hundreds of history buffs, World War II veterans and active duty military members gathered for the event. The band then played both countries’ national anthems. The ceremony also included a 21-gun salute to honor veterans of the war.”

This is part of a wider calendar of events marking the 70th anniversary of the Normandy landings.