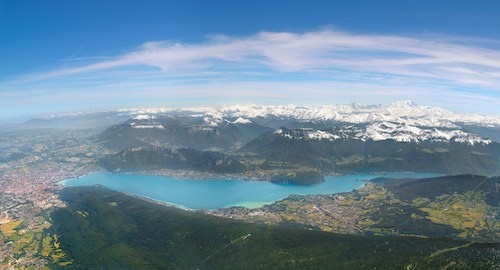 “In this birds-eye view of Lake Annecy, the town of Annecy is on the left and St Jorioz, one of two lakeside villages in which MGM plans to build, is in the centre of the picture”

Properties with Sailing and Skiing on the Doorstep Will Appeal to British Buyers, Predicts Developer.

Plans to build new holiday homes in four locations around Lake Annecy, in the foothills of the French Alps, have been announced by MGM French Properties.

Winning planning permission for the 37 new homes in such an environmentally-sensitive location with unusually strict local planning controls is regarded as a ‘landmark achievement’ by Richard Deans who heads MGM’s London-based UK sales office.

‘MGM’s enviable reputation as a leading developer of residential schemes throughout the French Alps played a key role in achieving local approval,’ he explained.

Although development opportunities in the Annecy area are rare, MGM has identified and secured many of the best locations in recent years, thanks to the strength of its business and a reputation for high-calibre schemes spanning 50 years. The firm has been welcomed by the area’s local authorities which, during the past 16 years, have applied stringent new requirements to planning applications, paying close attention to the style, finishes and overall quality of the architecture. 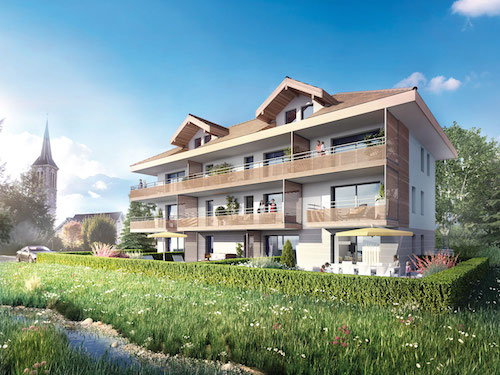 All of MGM’s planned new developments will combine contemporary designs with traditional architectural styles. Two will be in the historic lakeside town of Annecy; the others are in villages on the shore of the lake, said to be the cleanest in Europe.

‘These are small schemes of a type which I believe will have a special appeal for British buyers, particularly those who enjoy sailing and skiing, both of which are on the doorstep,’ says Richard.

The smallest of the developments, La Villa Méïa, will comprise just four apartments within Annecy’s so-called Golden Triangle, the peaceful pedestrianised heart of the town with its cobbled streets and ‘Little Venice’ canal network. La Villa Méïa will be close to the Annecy store of Galeries Lafayette and just a few minutes’ walk from the waterfront.

Nearby Villa Lisa will contain 18 apartments in an established residential area currently being redeveloped. Close to the town centre, the new apartments will be just ten minutes’ walk from the lakeside promenade and parks.

The two villages in which MGM plans to build – both on the west side of the lake – are linked to Annecy by water taxis, a lakeside cycle path and local bus services.

One is Sevrier, a village ten minutes from Annecy by car with a sun-bathing lawn on its waterfront and a boating pontoon with moorings available. Occupying a tranquil setting only 500 metres from the lake, MGM’s Villa Opale will contain seven apartments, each with a garage, parking space and bike lock-up.

Further down the lake at Villa Emeraude in the centre of family-friendly St Jorioz, ten kilometres from Annecy, will be eight new apartments in a peaceful village setting. This part of the lake is popular for swimming.

In surveys, Annecy consistently features as one of the most desirable places to live in France. Flower-filled in summer, the town is a cultural centre hosting festivals, conferences, exhibitions and theatrical performances throughout the year.

‘For investors, there is good scope for long-term or short-term lets and holiday rentals, as well as capital growth,’ comments Richard.

The prices of new-build properties in Annecy have doubled in the past 15 years, despite the recession. They rose by eight per cent in the past year alone. In addition, rents have seen an annual increase of 1.8 per cent since 2007.

‘All these figures are higher for properties located close to the lake,’ says Richard.

• The off-plan prices of MGM’s new apartments in Annecy and around the lake depend on size and location. They range from €165,000 for a studio apartment to €760,000 for a three-bedroom property. For more information call MGM on 0207 4940706 or visit their website: www.mgmfrenchproperties.com 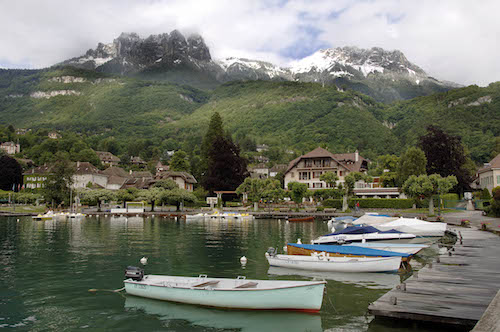 “A peaceful spot on Lake Annecy”

French people widely regard Annecy as ‘the perfect place to live’ all year round. The town is a centre for sailing and water sports in summer, and less than half an hour by road from top ski resorts like Le Grand Bornand and La Clusaz.

Annecy is around 30 minutes by car from both Geneva Airport and Chambery Airport. By train, the town is about three hours from Paris and its Eurostar rail link with London’s St Pancras International.

MGM, whose head office is located in Annecy, is committed to attracting UK buyers to its new homes, both on the shores of the lake and close to the heart of the picturesque ‘olde worlde’ university town with its ‘Little Venice’ canal network, restaurants, cafes and weekly markets. The ‘hidden gem’ is well-known to residents of the Cotswold spa town of Cheltenham with which Annecy is twinned.

The appeal of the area around Lake Annecy – which is more than 14 km long and the cleanest lake in Europe – spans thousands of years. Archaeologists have found remains of a waterfront settlement near Annecy-le-Vieux dating back to 3100 BC.

Today the lake is popular for windsurfing, wakeboarding, swimming, scuba-diving and fishing. Nearby are facilities for paragliding, mountain biking, hiking, rock climbing and canyoning.

Previous Article Let’s Make a Trousseau with Beautiful Antique French Linens
Next Article What Came First, the Chicken or the Bearskin?