A culinary adventure in Limousin 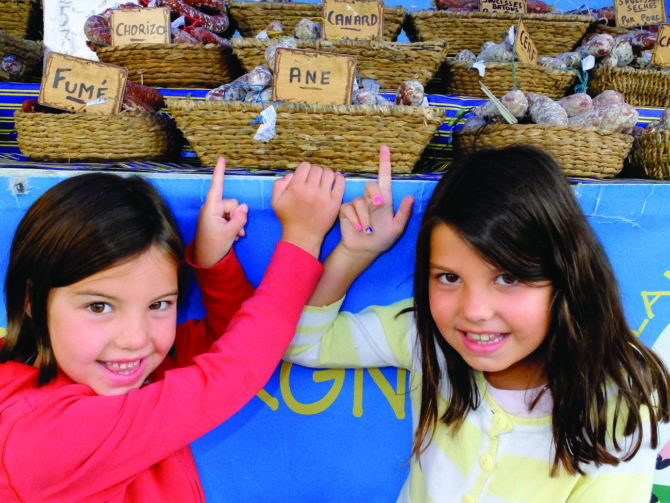 My six-year-old daughter has just been tricked into eating donkey meat, and with such ease. She hasn’t learned the French word ‘âne’ yet, so she’s no idea that the slice of salami offered to her by the market stallholder once belonged to poor Eeyore. Not that she seemed particularly bothered, even once I’d confessed my dupery…

She and her sister, who’s 18 months older, have been fully prepped for some culinary peculiarities. I’ve agreed to take them both on holiday to Creuse, a departément in the Limousin, on the condition that they agreed to sample food that they wouldn’t come across back home in the UK. I want them stepping outside their nutritional comfort zones. 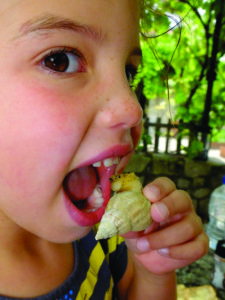 Call it a social experiment, if you will. In all the years I’ve been coming to France and studying Gallic customs, I’ve always been staggered by the way French children seem happy to eat food that British kids couldn’t even identify. Snails, frogs’ legs, andouillette, thrush pâté, horse steak, lamprey in a blood sauce, pigs’ trotters, calves’ brains, calves’ heads, calves’ intestines – the list of foods so exotic and/or repulsive to the minds of little Britons is as long as the queues outside the fast-food outlets near your average UK secondary school.

What my daughters quickly christened the “freaky French foodie tour” started in a motorway hotel, during the road trip down to Creuse. Expecting nothing more than standard autoroute grot, we were all surprised at the quality of the evening meal being offered.

This being the first chance to show off their adventurous spirit, the girls jumped in the deep end, helping themselves to pretty much everything on the buffet table. They tentatively nibbled at the beef carpaccio and gobbled down the risotto with crab meat and orange fish roe. Cornichons they already knew and loved, and therefore devoured in quantity. Anchovies they’d never even seen but were soon big fans of.

Then we taught them to rip the heads off whole prawns and separate the meat inside – the black veins and antennae caused a few grimaces. Finally, for dessert, we introduced them to their first ever passion fruit. It was all a big success.

Before the trip, I’d been worried my daughters wouldn’t be adventurous enough, but I was now concerned that they may have overindulged, especially with the prawns. My wife and I went to sleep that night, fingers crossed we wouldn’t hear the pitter patter of little feet on emergency visits to the hotel bathroom.

The next day, upon arriving in the very secluded Creusois hamlet of Saint-Dizier-La-Tour, we’d barely deposited the bags at our gîte, a beautifully converted piggery, when we were invited out to dinner by our hosts, Corinne and Olivier. It was to be another culinary jump-in-the-deep-end for our daughters. By chance, we’d turned up on the day of Saint-Dizier-La-Tour’s medieval-themed banquet – an annual celebration under the remains of the village ancient castle, which date back to the 10th century. 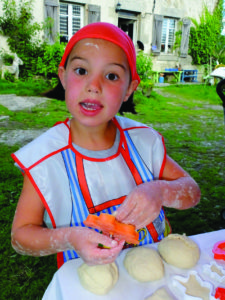 Everyone except us was dressed in ancient garb and the food had a medieval theme: meat stew, lentils, root vegetables and lots of cheap red wine. My 21st-century daughters weren’t too impressed with its stodginess but I promised them it would be adventurous and modern French fare from then on.

Sure enough, over the following days we introduced our kids to every alimentary adventure we could think of. We visited a farm where, once they’d petted every animal you care to mention, they picked their own raspberries, redcurrants and blackcurrants, then enjoyed a classic French kids’ gouter of bread and jam plus hot chocolate. We took the girls out to a restaurant for crepes, which they demolished with gusto, and goaded them into trying Limousin beefsteak cooked à point – they couldn’t manage more than a few bites and the serrated knives nearly caused damage. We joined them on a bread-making course at a donkey farm up in the hills above the River Creuse. And on the Friday morning, at one of Creuse’s prettier towns, Felletin, wandered round the wonderful food market, eventually stumbling upon the stall selling donkey salami. Surely, British kids don’t get much more adventurous than eating donkey meat?

Although on our side of La Manche we have made major culinary advances in the last couple of decades – and we’re far more open to spicy food than most other Europeans – the Gallic appetite for the unusual knocks us into a cocked hat. In terms of globe-trotting cuisine, they’re Christopher Columbus while we’ve just about made it down to the bottom of our gardens.

As famed Francophile Anthony Peregrine wrote in the Telegraph, “You have to keep your wits about you in French restaurants. You think you’re in for elegance – all mirrors, chandeliers and tottering desserts – and suddenly they’re serving andouillette. This is a sausage of pigs’ intestines. It looks, smells and tastes as if it should be in a lavatory.”

Peregrine says the “spectrum of what constitutes food” is far wider in France than in the UK, but why is there this culinary gulf between two neighbouring nations? France’s more diverse climate surely helps its menus to be more varied and there are all sorts of socio-political reasons. In Britain, the Industrial Revolution dragged millions from the countryside into cities, whereas France’s economy is still much more agricultural. 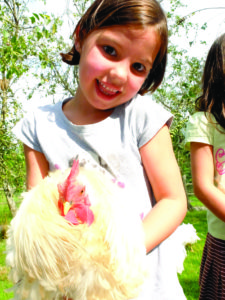 “We’re out of touch with the origins of food,” he says. “The British food chain begins, vacuum-packed, in the supermarket. The French one starts in the field or sea, with the animals in all their gory sloppiness.”

The way French babies are introduced to food also trains their palates to be more adventurous. British parents force-feed vegetables to their little ones – pleading, cajoling and disguising them – which has the psychological effect of turning green food into a punishment. French parents, on the other hand, extol the delights of legumes.

As Pamela Druckerman explains in her book, French Children Don’t Throw Food: “They describe he taste of each vegetable, and talk about their child’s first encounter with celery or leeks as the start of a lifelong relationship.” Druckerman says the French view vegetables and fruit “as the building blocks of [their children’s] incipient culinary education, and a way of initiating [them] into the richness of taste”.

In Creuse our two girls were certainly getting a taste for richness and we decided to really push the boat out for the final family meal at our gîte. All afternoon we hung out in the local hypermarket and the kids were boggle-eyed at the exotic meat, fish, shellfish, vegetables and even molluscs on offer. It was a million miles from their local branch of Sainsbury’s in London.

They cruised up and down the aisles, picking out their new favourites. Later, our rather unorthodox menu consisted of fried sole, pork chops, fresh beetroots, salad with walnuts and blue cheese, boiled artichokes, a selection of local Limousin cheeses, Le Creusois nut gateau and ice cream. It wasn’t a combination you’d find in any restaurant yet they pretty much wolfed the lot down. We’d succeeded. We’d turned our kids into French foodies.

Family holiday aventures in the Auvergne