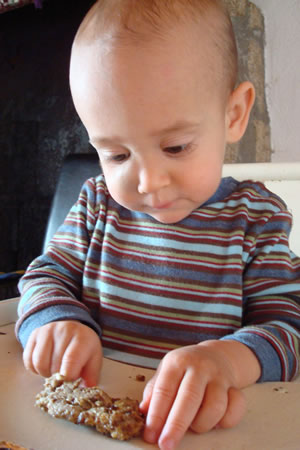 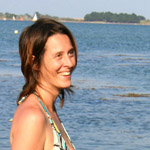 “C’est quoi?”
“C’est avoine”, I answer.
“Quoi?”
“Avoine”, I say, to a confused French face.
“Avoine, avoine, avoine..?”, I try again, saying it differently each time, in the hope that I will fall on the right pronunciation, the right vowel sound, which I, with my American tongue, have trouble with.
“Tu sais, les cereals?”
“Ah oui, l’avoine!”
“Oui, l’avoine”, I say once again, exaggerating the word so that my mouth will remember how to say it when I am trying to speak without thinking – though I know I will have this conversation twenty times more, as I have already been having this conversation for two months. ‘Avoine’, or oats, not being big in the French diet always get me into this linguistic trouble, for instance when someone comes in while I am cooking porridge for my baby, or asks me what little Liam is eating now. ‘Horse food’ is what they say I am feeding my baby, and they shake their heads when they see the concoctions of oats, flax and quinoa that I make into little biscuits, for him to snack on throughout the day.

I understand their culinary disdain for my simple grain fayre, and I did stop being a vegetarian when I arrived here, for three reasons:
1) Absolutely impossible to go to a family meal and have anything to eat other then a carrot salad, as meat is in everything.
2) Absolutely impossible to pass up eating all of the delicious meat dishes which just taste so heavenly.
3) Living in the countryside, all the meat I eat is my nextdoor farmer neighbor’s local organic-quality stuff, so the reason I became a vegetarian in the first place, which was not to support the huge chemical farming industry in the States, is null and void.

So I have started to cook bourguignons and pork dishes, and I would not give up my Sundays of roast chicken at the in-laws’. But with my baby’s diet, I am an alien to the French way of life.

Liam gets stuck in
My child eats no bread. Gasp, shock and horror! When he reaches for the bread slices, which are ever-present on all French tables, I push them out of the way. And when my mother-in-law starts to give him the end slice to nibble on, I shake my head ‘no’, and then quickly try to give him something else to prevent the onset of tears. My husband – who is French – and I, have had a few loud-voiced conversations about this, due to him being of the “Look, I was raised eating bread and so was everyone here” camp, and me countering with, “I don’t want to give processed wheat which has no nutritional value to my baby, who is growing and developing”. The American always following a new diet VS the French with their renowned cuisine is older than the frogs VS the rosbifs; A nice little merry-go-round, with no hope of a resolution.

It is not that I am against bread, either, when it’s made with whole grains and natural flours. It is delicious and nutritious. But, like with most foods, people have adopted the quick and easy ways of doing things, and breads now are often white forms of fluff, even in France, where raising agents are rapidly replacing yeast, and further chemical additives need to go into the mix to hold the bubbles, due to the strands of gluten not having had time to develop properly. A nice crunchy baguette is satisfying to eat but frequently has very little in it that is good for you. And while I am all for adults making their own decisions about what to eat, for a baby I think we should be giving them the best building blocks possible, to start life with.

When we lived in the States, my husband humored my four month totally raw food diet, eating sprouted lentil soup, heated just by the spiciness of the jalapeno, or lasagna made with zucchini noodles and cashew butter cheese. Most of the time, the taste of so pure a food was amazing. The desserts to this day rival anything you can get in the patisserie, and are really good for you. But then, there were the days when my husband would simply have to have camembert and bread. Bread was easy, the camembert, on the other hand, was pasteurized, this being in the good ole US of A, where they are afraid of raw dairy products. Real camembert was not even always in the special French cheese section of the upscale organic supermarket.

Slowly, I started putting cooked meals back in the routine; the compromises you make when part of a couple. Then we moved to France and raw was over, except for the occasional meal. The French family was incredulous that my husband would go so long without meat or cheese, and they fear that I am doing the same with the baby, raising him with American hippie food sense, and they don’t see his diet as nutritional health sense. Ah – vive la différence!

On the right track

So, I am learning ‘avoine‘, ‘lin‘, ‘siegle‘, my organic food French is getting better than my ‘where is the loo?’ French, and I continue to make whole grain biscuits in the hope that Liam’s first year of life will put his body on the right track.

Grind the oats and flax until fine, in a coffee grinder or similar. Transfer to a mixing bowl, add all other ingredients and mix well. Shape into desired cookie shapes and place them on a baking tray. If you don’t have a dehydrator then put your cookies in the oven at a low temperature, notexceeding 120F. Check each hour for preferred texture.

The mixture could also be eaten right away as a cereal/ porridge.

If you are unused to using cup measurements, simply make sure that the quantities are proportional.

Ed – please note that some nutritionists would not encourage the consumption of some raw nuts and grains, especially for babies, so please ask your doctor or nutritionist for advice before feeding any of these to a child.

Abbey Nicholson runs In Touch, a moving spa vacation, which combines her love of great organic food and spa pampering. She lives in France with her writer husband Anton, Varenne and their 1 year old, Liam Maximilian Joe Smith Varenne which is his official name on both his French and American passport.