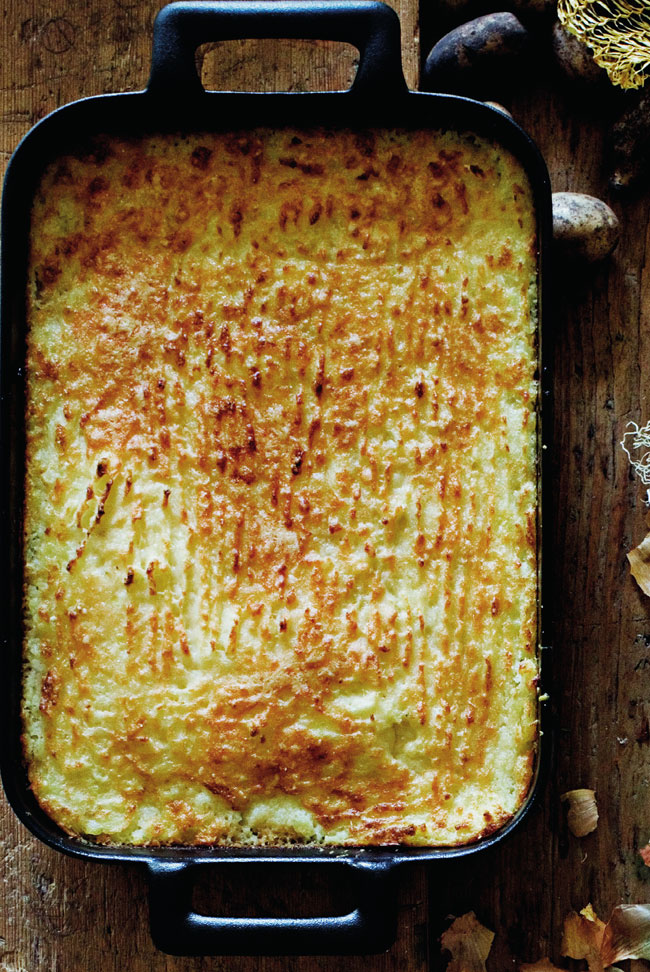 Confit de canard has become something of a cliché: It’s standard on most bistro menus in France and in French restaurants around the world, and you can even buy it canned in most supermarkets. But when it’s good, it exemplifies in one bite what French cooking is all about: beautiful ingredients cooked in a traditional, often simple way. I like to serve this national dish to guests in its purest form, with roast potatoes and mustard. It’s always a hit. As good as duck confit is, sometimes I like to take it one step further toward culinary nirvana and turn it into a parmentier, or shepherd’s pie. That, of  course, is another classic, but I find good versions of it hard to come by in restaurants. It’s usually decent enough but rarely breathtaking— and believe  me, this dish can be breathtaking. This parmentier is only as good as the confit de canard you start with (whether you make it yourself or not), and the  most important thing is to keep it moist and use a decent wine for the cooking. Serve with a crisp green salad on the side.

✽ Make the duck layer. Remove the skin and bones from the duck legs and shred the meat into bite-sized pieces.

✽ Make the mashed potatoes. Put the potatoes in a pot, cover with salted water, bring to a boil, and cook until they’re tender, for about 15 minutes. Drain the potatoes, return them to the pot, and mash with the butter and crème fraîche.

✽ Season with salt and pepper.

✽ Top the duck mixture with the mashed potatoes. With a fork, flatten the potatoes into an even layer and sprinkle with the Parmesan cheese.

✽ Bake the parmentier until it’s golden brown, for about 25 minutes.

✽ Sprinkle the duck legs all over with a generous amount of salt and pepper, and rub into the skin and flesh. Put in a baking dish or shallow bowl, cover with plastic wrap and refrigerate overnight.

✽ In a pot just big enough to hold the legs in a single layer, melt the duck fat.

✽ Add the duck legs, bay leaf, garlic, and thyme and cook over medium-low heat at a steady gentle simmer (70° to 80°C) until the duck legs are cooked through and golden, for about two hours.

✽ Transfer the duck legs to a plate and strain the duck fat through a sieve into a wide pan or baking dish, just large enough to hold the legs. Add the duck legs to the fat and let cool. Ideally, there should be a thin layer of fat covering the legs. The duck can be refrigerated for up to two weeks.

✽ To serve the legs on their own, in a sauté pan, fry them in the butter until slightly crisp and golden, three to four minutes on each side. Serve immediately.

Previous Article Moving House to France: Packing and Preparation
Next Article An easy recipe for thin and delicious French crêpes