Eating Out in Dieppe 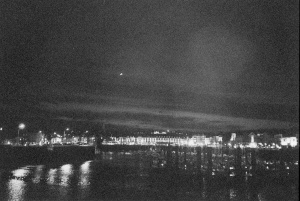 I imagine all the regular arrivals at Dieppe head for a familiar eatery on Quai Henri IV. Napkins flourished beside a sea of bobbing masts. For years I favoured the Restaurant du Port, menu set in stone, solid Norman clientele and the novelty of being served by Edith Piafs’ little sister. Until that is, the ‘Le Pollet’ district underwent something of a gastronomic renaissance. ‘Café Jehan Ango’ is filled to the gunnels with unusual memorabilia. A washing tub in the corner, with mangle and giant tongs, ancient pressure cookers on the window sills and Mohammed Ali posters on the walls. Old dappled rum bottles on the bar infusing ginger, kiwi and passion fruit. The telephone rings with a bygone chime, the operator arching an eyebrow at a sultry, whispered conversation. On the 14 euro formule there is prawn and mussel salad with loads of parsley and homemade mayonnaise; a succulent wing of skate slipping easily off the bone; and a sharp creamy Roquefort to accompany the local cheese. Two nimble waitresses maintain a relay of plates above the crowd, the chef emerging at intervals to replenish a litre carafe of red wine. Barrel belly bound in a solid mauve apron, hefty jowls and an emphatic walrus moustache.

On the return journey I wanted to try the fish menu at Le Turbot just 200 yards away, but found it shut, so tucked in for a second serving at Café Jehan Ango. The name relates to the former fief of Dieppe who defeated the King of Spain in battle, and surveyed his fleet from the castle at Varengeville. There is a huge à la carte menu on the wall, old traditional bone breakers like Tripes and Sauerkraut, and novelties such as cassoulet of snails with a cep and morel sauce. I plumped for monkfish livers, having never tried this delicacy, known by gourmets as ‘woodcock of the sea’. Intensely fishy, clean and fresh. Made for the boat after an early evening apéro at Mieux Ici Qu’en Face, always a toothy welcome and an unparalled view of the port as it subsides into a soothing twilight blue.

Rob Silverstone’s best-selling book A Mule in Rouen is now on sale on board Transmanche Ferries to Dieppe.

For more information on Rob Silverstone and his books, visit