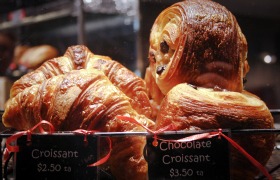 Sandra Beeston is a French-Australian expat who has been living in Sydney for six years. In that time, she has researched all the best places to find her French home comforts. From baguettes and croissants to cheese and steak frites, Sandra shares her top 10 French foods and where to find them in Sydney.

It is easier and easier to get decent, even excellent bread in Sydney. Brasserie Bread has been at the forefront of the new breed of artisan bakers and are renowned for their high standards and the passion they put into all their breads and pastries. Their baguette à l’ancienne is no exception. Put it in the oven for a few minutes for even more crunch and enjoy! It would be impossible not to mention the very popular Bourke Street Bakery in Surry Hills, which offers a semi-sour baguette that is just perfect for me, soft and not too dense, neither too airy inside, with a lovely crunchy crust. Get there early and nab one of their ginger crème brûlée tarts – they are to die for!

Ex-IT worker Hieu, nostalgic for the fresh baguettes he used to find in his natal Vietnam, decided to open his own bakery, Taste Bakery, which has become so popular that it has since spawned many offshoots all over town.
Their viennoiserie is amongst the best in Sydney: try a simple croissant, flaky and buttery as it should be, or if you feel like something more substantial, one of their enormous raisin snails!

In sunny Cronulla, Alley Break Café, a relatively newcomer, has shaken things up, with owner Nick Tabet and Chef Darren de Boer working hard to offer locals tasty dishes with the best produce and quality ingredients available. Grab a table with an unbeatable view on the beach and savour their croque-madame, oozing with egg yolk and yummy raclette cheese, with ham on a generous slice of sourdough bread, made on the premises. 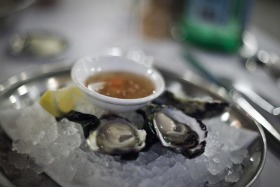 Felix Bistro is a beautiful New-York style French brasserie (if that makes sense) and one of the few restaurants in Sydney shucking oysters to order. You can choose from a variety of Sydney Rock oysters and seasoning, lemon wedges, shallots and vinegar, but I say just enjoy them ‘au natural’!

Not something you would expect in a small inner-city bar… Pocket Bar is unique in that it offers delicious cocktails, as well as a great selection of sweet and savoury crêpes. A great little place in trendy Darlinghurst, run by a French team.

Celebrity chefs, farmers, families, doggies and babies all converge every Saturday at the Eveleigh Markets, hosted in this great picturesque space that is Carriage Works, an old railway workshop building. You can finish waking up with good coffee and a croque-madame made by Bird Cow Fish’s chef Alex Herbert herself, buy seasonal fruit and veggies, heritage tomatoes, beautiful exotic and locally grown mushrooms, goats cheese (bliss!), delicious walnut bread from Monsieur Tartine and go straight home to make yourself the best sandwich with your newly acquired produce. 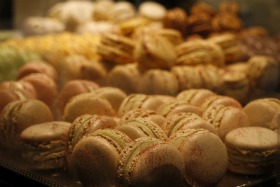 Baroque Bistro was a long-held dream of late Pastry Chef Pierre Charkos, from The Rocks institution La Renaissance. Thanks to his family, it has now come true. Baroque offers a modern twist on classic French fare, as well as a great view of the Harbour Bridge. Given their pastry credentials, expectations are high for their macarons, but they never disappoint. Don’t leave without trying the salted caramel flavour, you won’t regret it!

The team at Black Star Pastry work tirelessly to offer us clever and original creations, such as strawberry and watermelon with rose cream, ginger ninjas and classics such as their chocolate eclairs filled with intense dark chocolate crème pâtissière and covered with dark chocolate icing… sigh. 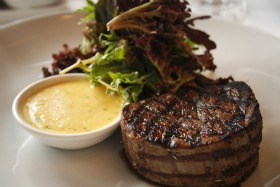 The Tastevin bistro was recently voted second for People’s Choice in Time Out Sydney’s food awards. It is run by a friendly couple, Natasha and Alex. It is very popular with the night crowd as it is one of the rare restaurants staying open until very late in Sydney. They offer unpretentious, classic French fare, such as duck confit, roquefort soufflé and a very satisfying beef eye fillet with pommes frites and peppercorn sauce. One of their signature dishes is gnocchi à la Parisienne: poached choux pastry dumplings with mushrooms in a white truffle mornay sauce… need I say more?

We should be very grateful to all the cheese importers, as it is not an easy task dealing with the Australian quarantine to be able to introduce beautiful European cheeses to consumers. Lucky they are here, so I can have my fix of Chabichou du Poitou and my favourite cheese in the world, Comté. As for local cheese, the whole of the Old Telegraph Road range is simply the best thing to happen to Australia! I’m getting a bit too excited here, but the camemberts, bries and washed-rind cheeses created by French expat cheesemaker Franck Beaurain and made in Gippsland Victoria are worth writing home about. To me they are the best European-style cheese in Australia. Try their Vacherin-style cheese, Jackson’s Track.

That concludes my ‘Top 10’. Please don’t hesitate to let me know if you don’t agree or want to tell me which are your favourites! – Sandra