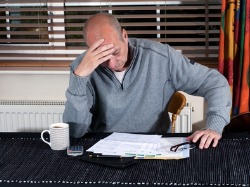 It will not be something that buyers will wish to contemplate when they are taking out a mortgage for their purchase, but it is important to understand just what may happen if the lender has to repossess a person’s property in France. In this article, we will look at the steps that may take place when a property owner fails to observe the terms of a mortgage.

Borrowers will of course be fully aware when they have not correctly discharged their monthly mortgage repayment obligation. Most lenders would not be too concerned about one instalment being missed: this can, after all, follow a simply mistake or banking problem.

However once it becomes clear that there is more than just a passing mistake, the bank will seek to protect its position. The first step should of course be that the lender will contact the borrower to establish the gravity of the problem. It is surely at this point, if not before, that a borrower in difficulties should look to discuss the situation with the bank. Where the problem has developed from the fact that monthly repayments are too high, it might be possible to renegotiate payment schedules to make the burden easier to manage. It is rarely in a bank’s financial interest to repossess a property, so they may often look to restructure if that is likely to work. However, this would require early and proactive discussions.

During the recession of the 1990s in the UK, there were many repossessions of British properties that led to owners “giving the keys back” to their bank. Such a suggestion is occasionally offered now as a way of solving the problem, especially where the property is a holiday home. It is not, though, quite that simple.

If the lender is not prepared or able to negotiate, then it will look to retake possession. The matter will be dealt with by specific debt control departments at the bank, where the main aim is to recoup as much of the debt as possible. The bank will instruct a French lawyer – an avocat – to issue proceedings. These proceedings are most likely, in fact, to be for a request to the court in France to authorise the sale of the property. In general, that sale would be at an auction.

It is important to note that the bank will not look to spend too much time holding on to the property, so it is likely that a rather low reserve price would be put against the property, to ensure that a buyer will be found. One result of this, though, is that the final sale price may well be lower than the level of the debt.

Therefore it will normally be preferable to try to sell the property on the open market first. Again, this will require early discussions with the bank, although it is possible that they will allow some time for a person to sell on this basis. It will, after all, be cheaper all round, since the fees of the debt management process – including penalty interest and extra legal fees – will not accrue.

An important point to note is that the conclusion of a sale – whether it be by auction or on the open market – will not automatically release the borrower from any obligations. The bank will still treat the borrower as a debtor for so long as any part of the debt is outstanding.This is why, as mentioned above, it is not really possible just to give the keys back: for so long as any charges are outstanding, the borrower remains liable for these, so irrespective of whether the borrower remains resident outside of France, the debt can still be chased, and simply washing ones hands of the property would not necessarily extinguish that obligation.

The bank must give sufficient notice of any proceedings, and where the borrower lives outside of France there are formal procedures that must be followed to ensure correct service of documents, including full legal translations.

Such procedures inevitably increase not only the time a matter will take to progress, but also the costs involved. Once a borrower falls into arrears the costs begin to increase substantially, making it perhaps ever harder to avoid full repossession.

A mortgage lender is unlikely to want to take back possession of the property, as they will not want to have the burden of managing properties, and there is a real risk of it having great difficulty in being able to recoup the entire loan and any other losses. If a borrower does start having difficulty in keeping up with payments, then it is important for a discourse with the lender. The sooner that discussion starts, the greater the opportunity to avoid losing the house.

This article is for general information purposes only and does not constitute legal or other professional advice. You should not act or rely upon this information.

Ashton KCJ is authorised and regulated by the Solicitors Regulation Authority (Recognised Body number 45826) and by the Financial Services Authority.