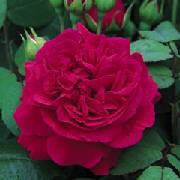 A few years ago the Liddell family – Charles and Charlotte plus children Hugo, Alice and Freddie, then 11, nine and two respectively – moved to the countryside just outside Bayeux in Normandy. Having had a holiday home here for many years, they decided to take the plunge after Charles was made redundant from his IT job in Gloucestershire and their financial situation meant drastic change was needed. Four years after arriving they opened La Rose Anglaise, selling David Austin roses. Here, Charlotte tells the story of their first nerve-wracking year of trading …

The publicity has worked! Over the previous few weeks we sent out press releases to local newspapers within a 50 kilometre radius. Most did a lovely story on us and now on opening day – March 17 – we have lots of people coming to take a look. What a relief!

Deciding to open the nursery was always going to be risky – when we showed our business plan to our local chamber of commerce, they commented that we had no margin for error. And we don’t. We started it with capital of just €10,000 so it has to work – and quickly. We also have a gîte and do bed and breakfast but while these do well in summer we need an income coming in during the winter if we are to survive here. This is where the nursery comes in.

The idea for a rose nursery was dreamed up over a brain-storming – and rather drunken – lunch with friends, and at the time it seemed like a good idea. There are some things the French believe the English do very well, and roses is one of them. And we have the land, which previously was just being used by the sheep. However, neither of us have experience at doing this kind of thing, although Charles is a keen gardener and loves roses. Only time will tell if we can do it.

Once we decided to go ahead our first step was to contact David Austin. I was concerned that they would be unwilling to deal with such a small enterprise – our first order was just 625 plants – but they have been fantastic. As well as helping us choose which roses to sell – Charles and I selected our personal favourites and then David Austin tweaked the list to make sure we had a mix of colours and types – they also gave us a garden plan for planting the rose garden which shows everyone how beautiful the flowers are.

We have been lucky to have had a lot of help. As well as looking over our business plan, the Chamber of Commerce also provided us with loads of research materials including market research. And then there have been friends and family. One Sunday a couple of weeks before we opened – we like to fly by the seat of our pants! – we had 21 people here helping get us ready. That day we managed to rotovate and landscape the land for the nursery and garden, and put up a huge shed which we use as the shop.

Even so, there was still a lot of back-breaking work for Charles to do – I don’t do digging…! 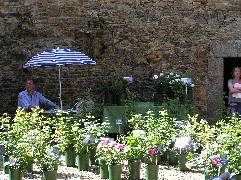 During our opening week we received a large order from the local parents and teachers association who want to give a rose to all their primary school children – in turn the children will give their rose to their mother on Mother’s Day, which is in June this year. It was an order for 120 roses all of which needed to be individually gift wrapped with ribbon. It took Charles and me a day to do them all, and we only made a profit of two euros a plant, instead of €12, but we decided to go ahead because we’re sure it will be good publicity and also generate a lot of good feeling. We attached a card to each and are now hoping that the mothers come back for more.

The school roses were one of two large orders taken that first week. On our first day a local French gentlemen saw Tess of the D’Urbevilles, a lovely dark crimson rose (see pictured top left), and ordered 80 of them for his garden. We didn’t have that number in stock but a quick call to David Austin meant we managed to get them all to him within the week. A result!

We are three months in and have sold almost all of our first order of roses, which is fantastic. We are open every afternoon bar Monday although occasionally people do come by on our day off and we let them look around – we can’t afford to turn away the business.

Our clientèle has worked out to be about 20% British and 80% French. The latter vary, from the mayor’s wife to French farmers who arrive in their mud-splattered overalls to buy one rose and wealthier families who buy a dozen. They are, though, only interested in the English roses – the old French ones are languishing in a corner and we may have to reduce the price to get rid of them. The most popular varieties are Tess of the D’urbevilles, Crown Princess Margareta, a good reliable plant with large apricot/orange flowers and Gertrude Jekyll which is deep pink.

The pace of the nursery has quietened down – people come to look rather than buy as no-one traditionally wants to do any planting during summer, and the gîte and B&B business have taken over in terms of time and money. However, we are still going to markets and fairs which are important not just for sales but also publicity. Charles goes to the local market every Saturday morning and on at least one weekend a month there is a plant fair somewhere. One of the large is at Château Gratot, a castle that dates back to medieval times. This year we sold sixty plants in two days at this fair. Next year we plan to put aside 100 roses. 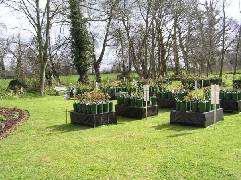 We’re busy again in the nursery. David Austin begins dispatching plants in October (they stop in April) which means our order arrives. Cue a lot of work. The roses arrive bare-rooted in sacks and we put them into pots with compost and fertiliser. In preparation for our first year we did 625 roses and re-stocked three times which means we did another 300 or so roses. This time round we ordered 200 with plans to re-order in the spring. We have got a few more varieties to choose from including three of the roses launched by David Austin at last year’s Chelsea Flower show.

In the display garden we have 27 varieties planted in groups of three or five which are inplanted with other flowers including geraniums, foxgloves, lavender, allium, penstemon, iris, nigella, alchemilla molis, large Oriental poppies and Chinese anenomes.

There is, of course, a lot of ongoing maintenance. During this time of the year we need to water every other day – in the summer it is every day. Then we have to feed the roses and regularly dead head them. Blackspot is a particular nightmare. This summer has been quite wet so the black spot has been particularly bad. As well as spraying we need to remove the diseased leaves and burn them. It is very demoralising to have a plant bursting with health in spring but so badly covered in blackspot a few months later that it has to be cut right back.

But on the whole roses are hardy plants. We have fashioned displays from wooden pallets covered in garden matting and except in particularly high winds they cope with rain and even snow. I think the most destructive creatures we have to look out for are our goats. One day one got into the nursery and we discovered him standing on one of the displays happily munching away! 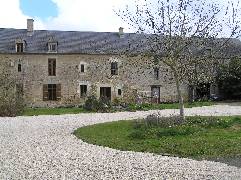 At with summer, how well we do at this time of year depends on the weather – when it is wet and cold no-one wants to look round a nursery, and we don’t do the markets because people are not in the mood for browsing. The extra time gives us a chance to sit back and take stock.

So, how have we fared? We have broken even which is great for the first year. In the year to come we are likely to do the same as we will need need to advertise and that is very expensive. This means we are looking at the third year before we make a profit.

In many ways we have had a successful first year but it is still tough. We are classed as a micro-enterprise, and although at the moment we do not earn enough to pay tax we still have to pay substantial cotisations or social charges. They are horrific! The figure comes in at about €3,000 a year which is a big percentage of our turnover. Having said that, in France the support for the family is phenomenal and we get some of what we pay returned to us through child benefit, grants to send the children to private schools, vouchers for holidays and of course, excellent health care.

It is, though, a real struggle to survive in France. Every now and then, when we go through a crisis, I think about whether we should return to the UK but the children and happy here and don’t want to go back. For me, returning would just be a matter of having a regular income. At the moment we don’t know what is going to come in from one month to the next. The upside is that we have no debt. We have two homes and a business and owe no-one any money, and that is a nice feeling. The issue now is ensuring that we have a regular income.

So we have just put our very large and lovely five-bedroom house (above left) on the market and hope to buy a smaller house with land that’s just down the road. This way we will have the capital to invest and grow the business, buy another gite property for added income – our current one does 32 weeks a year so it would be great to replicate that – and ensure that we can keep our heads above water on a day-to-day basis. As the property we want to buy is so close to our present position it shouldn’t affect the nursery as we will be almost where we are now (we will dig up the display garden and transport it in wheelbarrows to a new site!)

It does mean, in a way, that we are selling the dream but we are moving onto something else. We have great plans for the nursery. We are starting a mail-order business so we can sell all round France. The French also love the cottage garden look so now we also stock a range of perennials such as primroses, nictotiana, euphorbia, hellebores, jasmine, and scabious. The plants are supplied by a friend who is an enthusiastic organic gardener.

So while it’s not always easy, we are looking to the future with excitement.