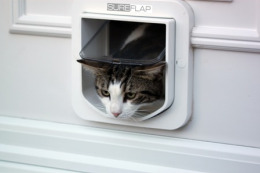 The British Embassy in Paris has chosen SureFlap, the world’s first multi-format microchip cat flap, to feature in its Pet Care Product Showcase based on its innovation and design. The company is one of only 20 UK firms to be selected.

“Cats are definitely becoming more popular. A recent survey showed that there are nearly 10 million pet cats in France versus 8 million dogs” says Vanessa Drew-Fugler, a French distributor for SureFlap. “We saw a niche in the market for a microchip cat flap that avoids the dangers associated with collar operated flaps and only opens for a specific pet.”

Vanessa supplies vets and garden centres across the whole of France as well as online customers. She says that the response to SureFlap has been very positive.

“We are finding SureFlap is especially popular in the countryside where collars can become easily caught on trees and fences. However, we have also seen an increase in sales in French towns and cities. This looks set to continue, as from 2012 onwards it will be compulsory for domestic cats to be microchipped.”

SureFlap was developed in the UK by cat owner, Dr Nick Hill. The Cambridge physicist was developing a new type of energy efficient identification technology, when he realised that it could be applied to cat flaps to stop unwanted animals entering the home.

SureFlap slots straight into the hole left by most previous cat flaps. It is battery operated and does not require mains electricity. Programming is simple – once the device is in ‘learn’ mode, it will store the microchip ID of the next cat that passes through it. It will then recognise this cat and prevent access to others.

“We are very interested in cats and have distributed and tested other cat flaps in the past but have found SureFlap to be the most reliable product” says Vanessa, “I have installed SureFlap in my home and it has been excellent.”