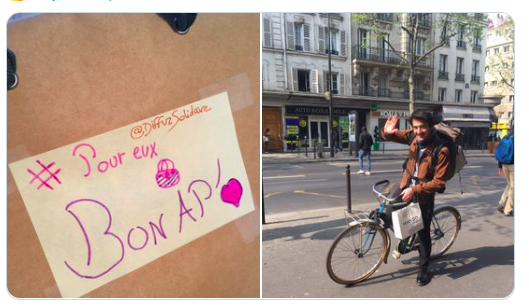 Kind-hearted, bike-riding Toulousains are dropping off homemade food parcels to the homeless – those confined ‘in the open air’ – as part of the #PourEux movement (For Them).

“They were already struggling before, now they are really struggling,” Thierry, a 50-year-old man on temporary unemployment (chômage partiel), told 20minutes.

The #PourEux movement began in Paris at the beginning of confinement and has enjoyed a spirited uptake in Toulouse. The idea is simple: volunteers cook at home – if possible “alone, taking all health precautions” – and then offer their dishes by filling out a simple form. A masked delivery man from the network then picks up the basket, and pedals until he finds someone to donate it to.

“Since April 6, we have delivered more than 700 meals, 300 this Wednesday alone, and trained 90 deliverymen,” says Allison Reber, who serves as both community manager and cook in the movement which inspires people to transform forced free time into solidarity with the less fortunate.

Stéphanie, an artist confined to her studio, cooks #PourEux: “I like this general atmosphere of solidarity, it speaks to me, and I wanted to be part of it, to give meaning to my confinement,” she explained.

You can see a video of #PourEux volunteers in action here:

Online links for selecting a city and adding your offer of a meal can be found here.