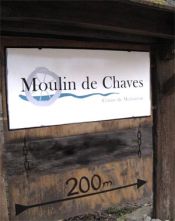 “This is what we use to wake people up or get them to meals or meditation sessions,” Martin said, as we stood inside a wooden structure with a Japanese roof. What had once been an industrial gas cylinder, about eight feet tall, and three or four feet wide, had had the bottom sliced off and was suspended from a beam. He swung back a heavy pole with a padded end and brought it against the cylinder. A deep boom echoed through the winter air, reverberating for what seemed a long time.

The variety of foreigners coming to the Dordogne is such that little surprises the inhabitants. But the existence of the Moulin de Chaves, a Buddhist meditation centre in the small village of Cubjac, between Périgueux and Hautefort, is probably on the far side of exotic. When I asked Martin, the director of the centre, how the local community had reacted he said that they had been wary to begin with. “But the fact that we had children helped.” Then there was an article in the local press, followed by a local radio interview. “And suddenly the lady in the boulangerie became much more welcoming than before.”

A long journey to the Dordogne

Martin Aylward has come a long way in more senses than one. He first encountered Buddhist meditation when travelling in India at the age of 18, over 20 years ago, when he was searching for meaning in what seemed a futile existence. “Twenty minutes into a ten day meditation course I knew that this was something worth devoting my life to.”


It was in India, too, that he met his wife Gail, a former Londoner. Their daughter Jaya was born in the Himalayas. Gail said that she didn’t want to bring their children up in India. Martin didn’t want to go back to the UK. They compromised and in 1994 settled in a remote spot in the Pyrenees. The nearest village was 20 kilometres away, the nearest metalled road three kilometres.

They set up a meditation centre. During their time in India they had met a large number of people from all over the world, who began to visit them. Word spread, and Martin’s reputation as a teacher grew. The Languedoc house became too small for the movement that was developing. They looked for somewhere else, and then heard of the former factory building in Cubjac that had been used as a Buddhist monastery for some time. It was perfect for their needs, and with another couple they acquired the building and surrounding land and moved in in the spring of 2005. 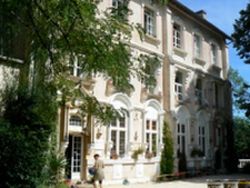 It’s scarcely surprising that they were bowled over by the place. The original building, a four-storey structure constructed in 1893 on the edge of the river, was originally a jewellery factory, until the First World War devastated the workforce. Then it lay derelict for some seventy years, until rescued by a group of Buddhist monks, led by a half-French half-Polish teacher of Zen. This group, strongly influenced by the Japanese tradition, constructed buildings in the grounds: dormitories for guests, a meditation centre that transports the visitor straight to Japan, a whimsical gatehouse that can be used as a small flat, and other small buildings now used as dormitories for male guests – not to mention the substantial structure that houses the improvised bell. They also constructed a pond that they filled with Koi carp, planted bamboos and created a small fountain and stream. Narrow paths wind round the plants and buildings, making the space seem larger than it is.

In 2000 Martin started a special event, the Dharma Yatra. This involves walking silently through the countryside, with a group of people, in single file, for two weeks. That sounds simple. It becomes a rather different matter when you learn that last year there were 240 people participating, from 25 different countries. The logistics are formidable. Back-up trucks bring food and luggage, as well as operating a mobile crèche for those with children.

I asked what the Association charged for this. “The original Dharma Yatra was run on donations. However, for events at Moulin de Chaves, we make a charge for accommodation and food, everything else is free,” Martin said. The whole movement turns on generosity. People give their time and energy. In return, those receiving the benefit make donations as a way of contributing to overheads. This is the underlying economy of the Buddhist movement.

The centre is open from May to September each year. During this time people visit for indefinite periods, taking part in meditation exercises. The mornings are generally silent. Women visitors are housed on the top floor of the main building, men in dormitories in the grounds. Some people bring tents. This year the centre also opened over the New year, when 40 people had attended.

A change from the Languedoc


And how is the Dordogne after the Languedoc? “I miss the proximity of the mountains, and the Mediterranean garrigue, with its wild rosemary and thyme,” Martin said. “This is much more plugged in to the centre of European life. We’re easily accessible from Paris and Bordeaux, for example.”

Everything’s relative. The only sound in the garden was the water pouring over the weir. And the vibration in the air from the striking of the bell.