Channel to the Med 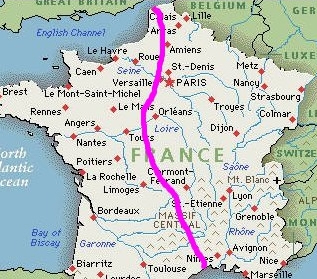 I had done the British End-End, and now fancied something different but along the same lines; so I decided that the French End-End seemed to fit the bill, from Calais to Stes-Maries-de-la-Mer on the Med, near Nimes in the South of France.

The route took us all the way from the English Channel to the Mediterranean Sea, along the way taking in the flat lands of the Loire Valley, cols of the Massif Central and Puy de Dome area, followed by the magnificent Tarn Gorge, before finishing with the Carmargue regions in Southern France, the total distance being 850 miles in two weeks, camping in a group of 12, luggage transported each day by van, route sheets were provided taking us along quiet scenic country roads, with one rest day half way through the Tour near the Puy de Dome.

The first week was spent in the flat area of the Loire Valley. I was expecting the flat countryside, but one difference from the Surrey lanes that I am used to at home is that the farms all mingle into one, with the early summer crops covering vast areas swaying gently in the breeze, and with no hedgerows to seperate them, the vastness seemed far more apparent. I also noticed a distinct lack of people, at least in comparison to my local Surrey rides; in France we would go for miles without seeing anybody. I can’t do that for long here at home even on an early Sunday morning. 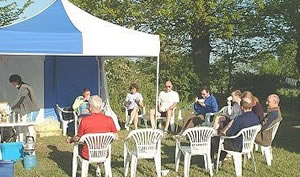 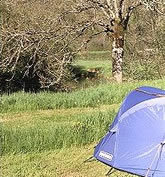 After a hearty morning breakfast at the campsite provided by the organiser we would head off for the days ride until 11’s, then onto lunch. On a couple of occasions we managed to find the lunch stops where the locals go, serving superb meals for €10. For that we got four courses, as much wine as we could drink and chocolate mouse for pudding – what more could you ask for? These meals represent real value and are typical in France. This is the France that I like to experience; the locals’ France where the real French go, not the tourists. The restaurants are normally family owned and the proprietors very obviously take great pride in their work. Well I say work – you can often tell they are in their element, so I think vocation would be a better description.

Chateau de Chambord in the Loire Valley is one recognised as one of the best in France!

We also had many picnic lunches, but whereas the €10 special four course meals leave you with a full belly, bread and cheese I personally find far less fulfilling in every way and cost almost as much, although I know many preferred this to a heavy meal. Sometimes, however, a picnic lunch is the only option as we travelled through small villages with no restaurants, so we had to make do. It is worth noting that small local restaurants often accept customers up until 1pm, then that’s it. Boom, finished; we got caught out on a number of occasions like this, hence the many picnic lunches. 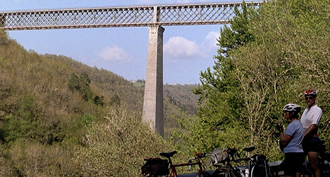 The Fades Viaduct Viaduct on the way to Pontgibaud is apparently the highest – in terms of construction from bottom to top – in Europe and designed my none other than Mr Eiffell, as in Eiffell Tower, himself

South of the Loire the route became increasing hilly as we headed into the Massif Central where the terrain is mountainous, with some long steep climbs and descents. The transformation happened very quickly. We seemed to turn a corner and that was it; hills every where. Fve days of flat cycling then wallop….these big bumpy things turn up and I had to get all puffed out and unnecessary in the leg-hurting department.

This was typical of the lanes in France

Actually obtaining a picnic lunch had to be planned as well, as it was interesting to note that many French retailers close for two hours at lunch time and work through until 6.00pm instead of 5.00pm; a stark contrast to here in the UK where retailers (including us) usually work 9-6 and are often so busy we do not even have time to eat lunch, let alone take a lunch break. The pace of life seemed much more relaxed than in the UK. Sunday closing made also made a Sunday feel like a Sunday (most closed Monday as well). In Surrey with everything open, it feels just like another day, with everyone rushing around at a million miles an hour; it really was like stepping back in time twenty years or so to when the same was common place in the UK.

About this time I rediscovered the joys of saddle sore, errrrrr the kind you get when the going is on the warm side and a gentleman perhaps may be inclined to perspire, not helped by the fact that I had been caught out the day before and got sunburnt in the cool sun. I then spent the next very hot and very sunny day covered up in my racing cape in 70 degrees plus for 8 hours or so. Fortunately, another cyclist on the trip had some special cream especially made for rugged stallion type chaps like myself. I think it was called ‘Gladiator’, a cream for the brave and completely fearless intrepid adventurer, or something like that, and it worked a treat… It may also be known in some chemists as ‘Johnson’s nappy rash cream’. At the time I could not have cared less what it was called as long as it worked; my bum liked it and that was good enough for me. It’s also that much softer now.

I hardly saw any Graffitti in France, except for this place!!

Through the Massif Central and the Puy de Dome the route remained hilly and became spectacular, as we headed towards the Tarn Gorge. This for me was one of the highlights of the whole tour. Pictures simply can not do it justice. In some areas, a collection of perhaps twenty or so houses were built into the gorge with no road access; they were serviced from the opposite bank by a cable car type of arrangement, except I could not see any cable car and I was sure the cable would not support anything heavier than a canary. But, hey, that’s the French for you; the cheeky dare devils who live on the edge, in this case literally!

The Tarn Gorge was superb, those houses on the right had no road access, they were serviced from the opposite bank by a cable car type of arrangement, except I could not see any cable car and I was sure the cable would not support anything heavier than a canary!

We then continued south through the dry hills and small villages of Provence, before heading around the edge of the Carmargue, to the pretty coastal Med’ town of Stes-Maries-de-la-Mer, which was very touristy. A Gypsy festival was going on that made the whole place an unusual experience I have to say, especially after two weeks of camping in remote villages. The next morning we headed to Nimes airport to return home and another tour was over…I am writing this on the following Tuesday sitting here typing away at 11.00pm ( I am no journalist, these take hours, longer than the bike ride sometimes) in my office in Croydon while it is all still fresh in my mind and the wind burn still noticeable on my skin; wishing I was just off to the local Restaurant with me new mates for a slap up meal. Fish fingers and chips when I get home does not seem quite so appealing somehow!