My French Garden in the Lot 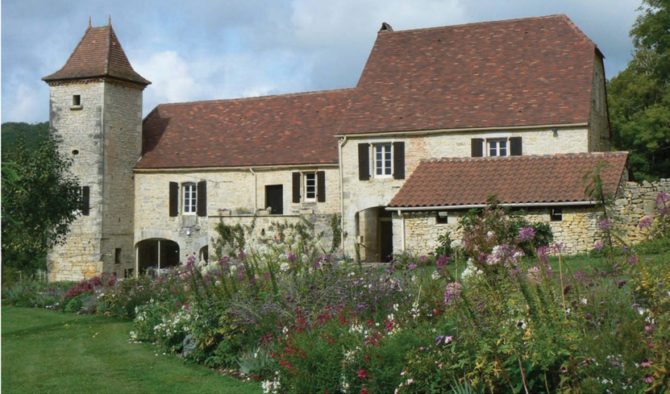 Sue and John Herring’s plot in the Lot…

Sue and John Herring left England in 2006 for the vert et agréable land of Lot, 30 minutes north of Cahors. The property itself had been used as a holiday home and even though it had plenty of land – more than a hectare – the garden was non-existent.

“Our initial task was to remove the three-metre thickets of brambles which totally surrounded the periphery.3 says Sue “We unearthed many large pieces of agricultural machinery and the original farm rubbish dump. Presumably, this was the system before rubbish collection was instigated.”

Before moving to France, the Herring family used to live in an old vicarage in Lincolnshire with around an acre of land, so they were no strangers to major gardening projects.

“Once my son had grown up, the cricket net was demolished and the football pitch was no longer required, we set about creating a garden,” Sue remembers. “Buy the time we moved I was very proud of our achievements and anxious to start developing a garden in France.”

However, their new house required major renovations so serious work on the garden didn’t begin until 2008.

“When we were looking for a house I said I’d take a shovel with me, to make sure that the soil was suitable to make a garden,” says Sue “I didn’t and we’ve ended up with 15cm of soil on top of solid rock, which presents a challenge. Furthermore, the temperatures here oscillate between minus 18 in the winter to plus 40 in the summer.”

Before leaving the UK, the couple took time to visit as many famous gardens as they could to gain ideas. Sue also had many garden design books and read every horticultural magazine she could lay her hands on. “When we arrived here we beat the bounds every evening with a glass of wine to get inspiration. I can recommend this approach!”

The result of that grape-induced inspiration is a formal design based on a garden at Walsingham in Norfolk.

“For both of us, colour is the most important feature,” says Sue “The front garden is designed using a palette of pinks, blues and white; our long bed at the rear has a ‘hot colour theme’ of red and yellow.”

She admits to making mistakes, largely based on her knowledge of choosing plants for British soil and climate: “For example, two of my formal rose beds are planted with pink Savoy roses, which I saw at a National Trust property. But they don’t work here because the light is much brighter. I rapidly found out that one must work on the maxim ‘right plant in the right place’.” 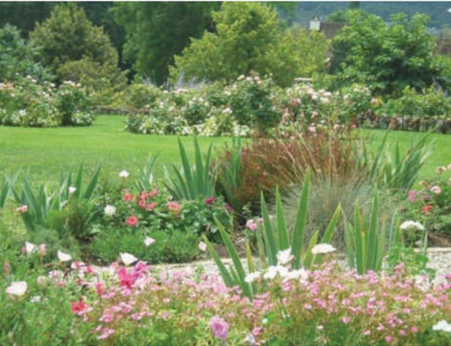 “Our long bed isn’t ideal,” she adds, “because it was created in the shadow of mature trees, which create dry shade, but I work around it. The raised bed was originally the pile of spoil created when the builder dug the drainage field. It’s only in the last couple of years that I’ve developed it into a bed suitable for plants requiring dry conditions, as it’s basically a pile of rocks.”

Because of the garden’s size, mostly for reasons of economy, Sue’s had to grow half of the plants from seed.

“I have to say it’s most satisfying,” she admits “and the house’s ground floor is covered in seeds and young plants from January to March – underfloor heating is a godsend!”

Sue admits that they could never understand why plants in garden centres in France are so mature, as their experience with poor soil means shrubs and trees take several years – as many as five, in their case – to really get established.

“As we get older we think time is of the essence,” she confesses, “so we do buy bigger these days. I recommend that everyone buys their plants from Lidl – they are of supreme quality and cheap. One needs to study the ‘pub’ each week and rush off to buy the plants you want before they’ve all gone.” 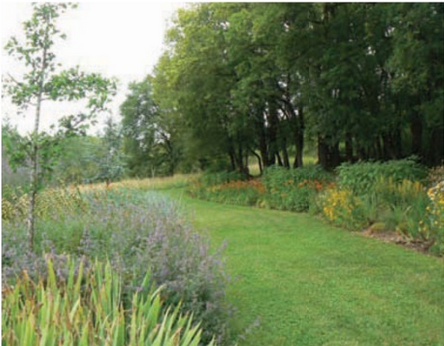 Despite the time and effort its taken, clearly the Herring’s plot in the Lot brings them a lot of pleasure.

“We bought the house because we loved the alley of mature trees that runs along one border,” says Sue. “In fact, it didn’t belong to our house but we subsequently did a legal swap with our neighbour who wanted a piece of our land adjoining his.

“We never cease to enjoy this alley in all seasons. We’re privileged to enjoy the private lives of the wildlife that inhabit it. We did have a problem with the deer, who will munch anything and everything they fancy, but now we grow enough for them and us. We still refer to our home here as ‘our little corner of paradise’, which to us it is.”

The Herring’s home is part of the Jardins Ouverts scheme, which sees private gardens open to the public across France during the Summer months to raise money for charities.