Sue Aitken from London owns a flat in Sanary-sur-Mer, a town in Provence that she discovered as a student. Here, Sue tells FrenchEntrée how the town has managed to retain its charm over the years and why she decided to buy the first property she was shown…

I spent a year abroad as part of my degree and visited Sanary with a French friend whose brother lived there. I fell in love with the place. Cobbled streets lined with interesting little shops lead down to the picturesque port with fishing boats and private yachts moored alongside each other.

Despite the fact that they have built more housing on the outskirts of the town, the port itself is almost the same as it was when I first visited nearly 30 years ago. It’s great people watching from the Bar du Sport and there’s a wonderful daily food market, not to mention a fabulous selection of restaurants.

Many years later, when I decided I wanted a second property in France, I went back and visited a number of in the area: Bandol, Cassis, St Cyr and La Cadière – but Sanary won hands down.

All the estate agents said that property sold really quickly in Sanary – it’s popular with Parisians, the Dutch and the Swiss… so there wasn’t much time to hang around. I was looking for a two bedroom flat with a bit of character, rather than a box in a purpose built block of flats, and had a budget of €200,000 – €250,000. The flat I bought in 2003 was the first one I was taken to see (though I did see a few others). 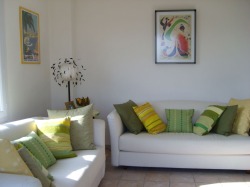 What sold it for me was its proximity to the port and a fabulous view of the sea from the living room. I also liked the fact that it was half a house rather than in a purpose built block which are all a bit ‘samey’.

I saw the flat on the Saturday, made the offer on the Monday and had signed the compromis de vente a week later. It all went fairly smoothly and a couple of months later I flew back to sign the contract.

The estate agent was quite efficient and it was actually less stressful than buying a property in the UK. Rather than get a French mortgage, I extended the mortgage on my house in London.

This proved to be the right decision, as the increased strength of the euro against sterling over the time I’ve had the flat would have almost doubled my mortgage payments if my mortgage had been in euros!

There wasn’t much to do to renovate the flat – I had it painted inside and out by a reliable and trustworthy decorator recommended by the estate agent. I also had the front garden replanted with lavender and rosemary bushes. There’s a network of tradespeople in Sanary, so once I found the decorator, I could find a plumber, a gardener etc

My advice would be…

1. If you earn money in sterling, get your funding in sterling or currency fluctuations could really impact your payments

2. Consider getting an English speaking notaire in addition to the one who’s automatically appointed. I speak good French, but the documentation and signing of the contract are fairly daunting

3. Find a good estate agent – they’re the source of all local knowledge, tradespeople and can get stuff done for you when you’re in the UK