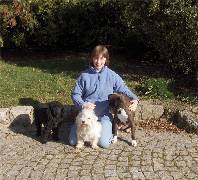 My husband Barry and I had been together since the age of 17. A university lecturer, he was diagnosed with bone cancer and after an exhausting two-and-a-half year battle he finally lost.

During my husband’s illness I hadn’t taken much time to think what I may do if the worse happened. But now that Barry had gone I was forced to think of my future. I needed to support myself financially and I had never been ‘out to work’. During our 25 years together, I had renovated several houses; we also had livery stables and four children.

Not long after Barry died one of my daughters had a baby. A little boy, she and her partner named him Alfie. Unfortunately, at just 3 months old, Alfie’s father walked out on both him and Joanna saying he did not want any further contact with his son. Joanna realised as a single parent she would need to work full time in order to support Alfie – however she did not wish to miss him growing up.

Together Joanna and I desperately needed a change but what would we do?

We work well together, so the solution was to start a business we could run from home. We both liked the idea of a bed and breakfast – my mother had run one from our family home when I was a child and Joanna had worked a weekend job in a country hotel whilst she was at school. The UK was our first choice, but properties with enough space for guests and ourselves were too expensive, so we looked further a field and settled on France.

Our key requirements were rural lifestyle, rolling countryside (not too extreme), a better climate (but still with ‘proper’ seasons), airline services and, of course, reasonable property prices. Incredibly the Limousin ticked all of these boxes! So we arranged a trip out there to view some houses and learn more about the area.

We loved what we saw, especially department 23 – the Creuse. On returning to England we put our house on the market and a few months later we found a buyer. We’d thought of moving our furniture to France and storing it in a barn until we were ready for it, the buyer however made us an offer on all of our furniture so we left it where it was and decided to buy replacements in France.

We arranged another trip to find our home in the Limousin and found a gîte/bed and breakfast complex that would take about six months to have up and running. I signed the compromis and we packed up in the UK, moving to rented accommodation in France.

We arrived here without speaking the language or knowing the culture. Joanna and I hadn’t even holidayed here! But within a week of being in France we started private French lessons and started to learn enough to get by.

We were due to complete on 31st December 2004 and all was going well until two weeks before the completion date. Then the sale started to fall apart. Numerous problems occurred, including tax and land issues and after four months of heartache, the sale eventually collapsed.

There we were, house-hunting once more; property prices had risen and as we had been living on the proceeds of our house sale for over seven months, our capital had shrunk. We had to change our criteria and look for any property that we could start a business from without major renovation works.

Luckily we found the perfect property, Le Verger, in the medieval chateau town of Bourganeuf in the Creuse. It belonged to the local notaire and was in fair condition. We signed the compromis in April 2005 with a completion date of July 2005.

At first we were planning on just running a B&B from the house. It is in the perfect location – walking distance to a beautiful town, yet tucked away in the middle of a hectare of garden, with views of the Limousin countryside.

On purchasing this magnificent property we set about trying to furnish it! We could not afford antiques but needed classical pieces, and we had heard about troc and brocante shops where you can buy second-hand items.

Following our visits to numerous trocs and brocantes, we were very disappointed. Although the style was right, the furniture was often scratched or damaged, chairs needed reupholstering, and everything had one thing in common – woodworm. Another problem was that we needed a large amount of furniture and we did not have the time to trail around the shops each week in the hope that they might have had some new deliveries.

After ruling trocs and brocantes out, we decided to look at the new furniture market but here again we were sorely disappointed – the good furniture was very expensive and the inferior quality was overpriced. After complaining about our problems to friends, we discovered that they too had had similar experiences. This made us realise that there might be a gap in the market, and after a few glasses of good French wine we wondered if it would be possible to set up a business selling furniture in France!

We completed on the purchase of Le Verger and set about renovating the property. There were so many challenges along the way! We had to install five bathrooms suites (including creating new walls etc). However the plumber cum builder we’d chosen turned out to be a ‘cowboy’ so we were left high and dry with leaks and faulty workmanship. This coincided with us having a car accident were another driver crashed into our stationary car at over 90kph – luckily Alfie was ok. However Joanna and I suffered from serious whiplash and we lost weeks of working on the house. But we picked ourselves up again, found another plumber, took on all of the building work ourselves and although much later than planned, in June 2006 we’d finished the work and had redecorated the house from top to bottom!

During this time we set up our company SARL Le Verger, similar to a UK Limited company, which means we are registered to import and sell furniture and operate a Bed and Breakfast. Our home, Le Verger, is also exclusively furnished with Le Verger Furniture!

The B&B eventually opened in June of last year. All of our bedrooms were accredited the maximum 4 épis grading by Gîtes de France, and our representative was so impressed with the quality of our chambres d’hôtes that she introduced us to the Director and the President of the departmental tourist board. This in turn brought us stacks of local publicity, including an appearance on a local France 3 television programme and a visit of 50 representatives from tourist offices across the Creuse and Haute Vienne!

We enjoyed a busy summer season. Primarily our guests were French and Belgium, as well as Brits, Americans, Australians, Germans and Canadians! Surprisingly, the season did not end in September. We had a large number of visitors in October and November and the Christmas period was busy too! January and February are quiet, as expected, but we do have one or two nights booked each week. I think part of our success is down to the fact that our particular area of France has very little luxury accommodation so there is a requirement for establishments such as ours. 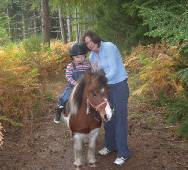 Joanna (left with Alfie) and I have taken to running the B&B like ducks to water – it is hard work but great fun, and who can complain when everybody who stays with us showers us with compliments about our beautiful home! My grandson, now 3 ½, loves having people to stay and is thoroughly spoilt by them!
Our furniture company is ticking along too.

We have been so busy with the bed and breakfast that we have not spent much time marketing it this year but many people find our details and purchase via our website. May be we can concentrate on it this winter…

So after hearing my story, and that eventually our lives are running smoothly, why then have we decided to have another complete change and RETURN TO THE UK?

It may sound crazy to leave when we have ‘made it’, but last week we put Le Verger on the market, and when it sells, Joanna, Alfie and I will leave France and relocate across the channel.

It is hard to explain, but when my husband died, I felt completely lost and alone. In moving to France my aim was to build a new life in a new environment. I purchased Le Verger with the goal of creating a luxury bed and breakfast and through sheer grit and determination my daughter and I have achieved this. There have been plenty of ups and downs, yet we have proved ourselves and actually feel quite proud!

The problem I face now is that I am missing my family in the UK and it is proving near impossible to see them. I’m tied up with the B&B and furniture sales in France and my family are tied to the UK. I think that it is incredibly hard to know what your priorities are following a trauma. I love all my children dearly and have strong relationships with all four. I suppose I justified my move by thinking that I would travel back and forth frequently.

At the time my oldest daughter was planning on moving to France too. My second daughter was working a salaried job with plenty of holidays and my son had just started university. At this time therefore, my children were able to visit Joanna, Alfie and I frequently.

Circumstances have now evolved – my eldest daughter’s promotion at work has prevented her move, my second daughter left her job to set up her own company. Her and her partner have also just had a baby so, like us, are tied. My son’s university course is demanding and he works part time too – over the past year we have only seen him a couple of times.

By returning to the UK, we will be able to play an active part in their lives once again and I would dearly love to see my new grandson grow up. Joanna feels much the same way so we have both decided to return.

France has more than lived up to our expectations and I would recommend moving here. I am delighted to have had this life experience and the opportunity to be part of a different culture. My grandson, Alfie, is learning quickly. He attends nursery school 3 mornings a week and adores his maîtresse – his counting in French is far more advanced than in English! We are determined to keep up his language, thus enabling him to grow up bilingual. Joanna has enjoyed learning a new language and on our return to the UK she intends to study a four-year degree in French to become a qualified translator. This will involve her working for a year in France – so we will return to Bourganeuf once more!

The way of life in the Creuse is idyllic and we shall always keep a foot here. I have no regrets in moving to France; in fact I will always feel grateful that I had this period to rebuild my life and self confidence. In the mean time until we find a buyer for Le Verger, my daughter and I will enjoy living in such a beautiful part of France and welcoming guests into our home.