Where should I start? It’s been a packed 13 months. My girlfriend, Jude and I are both motorcyclists and both love to travel, so three months after we met, during the Easter break, we got on our BMW K1200GT and Honda CBR1100 Blackbird and headed south, intending to reach northern Spain and look for a home.

We stopped in the Dordogne just for an overnight stay. When we woke the next day and looked out into the daylight, we both knew that we had found paradise. We extended our B&B booking to cover the next five nights and we set off to discover the area. To say that we were impressed was an understatement – we were bowled over.

We both returned to our Civil Service jobs working for the MOD in Cambridgeshire and planned the next trip. So only a month later we were back, again on two bikes, and this time we were house hunting. We looked at loads of houses in the Cahors area but it was not the Dordogne, so we went to Sarlat and started the search again. One estate agent had what we were looking for – the advert said “Tres isolé”. 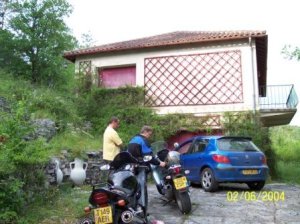 A visit to the house confirmed that it was the place for us. 14,000 square meters of woodland, on a hillside, with a 1970 house in the middle. No neighbours, not too many expats, but with the local town 5km away. We didn’t make an offer at that point but took loads of photos – thank goodness for digital cameras.

On our return to the UK we put both our houses up for sale, sold one of our cars and worked out the finances. I am very lucky that I have an RAF pension so I knew that I could retire at the age of 45 and still have an income. As the first house was in the process of selling I phoned the estate agent and made an offer, and it was accepted.

The end of July saw us driving out to the Dordogne for the third time in four months, this time by car, to sign the Compromis de Vente. On our return to the UK we sold the car and went about changing the motorbikes too. There is a 100bhp limit for French-registered bikes and ours were 130 and 165, so we ordered two new BMW R1100S’s with 99bhp.

We returned again to France for the final signing for the house on September 26 in a hired Luton van with all our worldly possessions on board – apart, that is, from the most important items, the bikes. 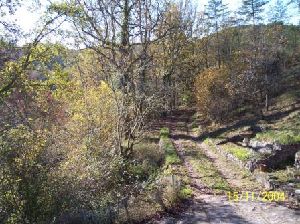 The van refused to climb the driveway and eventually the clutch burnt out – at the bottom of a 200-metre uphill drive to the house! Thank heavens, we managed to get some friends with a trailer to come out and ferry the goods to the house (thanks Tom and Andrew), and our AA cover gave us hire cars to get back to the UK for our last visit home.

We arrived back in France, this time for good, on November 1, bought a French-registered car and now live life to the limit.

We have many French friends. Our estate agent turned out to be one of the friendliest people in the area and we have visited his house a few times. We are learning French as fast as we can and drinking red wine so that we fit in with the locals. We have just celebrated our first year together and often think of the work colleagues that we left behind in the rat race.

Does retirement suit me? Yes of course – there is so much to do. I cut wood in the forest for the heating, I visit all the interesting sites in the area, I go to the cafe regularly to meet the local people and learn a few more words of French. I cannot see us going back to the UK, even for a visit. And we are planning on a French wedding next month, at the local Marie.