How We Set up Our Cycling Business in Occitanie 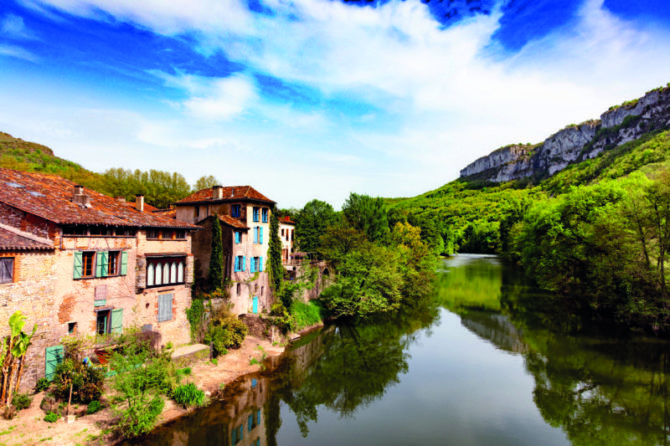 It’s a familiar tale: couple nearing retirement, kids having long left home, trade their empty nest in the UK for a new dream home in a rural French idyll. This, however, is not that story. Back in 2016 the Office For National Statistics published data revealing that of the 148,000 British citizens living in France, 46 per cent were over the age of 55 and most of them were retired.

In June that same year, four budding entrepreneurs in their 30’s finally moved from Coventry in the UK to their newly-refurbished farmhouse near the village of Espinas on the edge the Tarn-et-Garonne – a département still in the Midi-Pyrénées at the time, but which later that year became part of the new Occitanie super-region.

Changing the boundaries may have redrawn the maps, but it’s happily done nothing to alter the diverse geographic beauty of the Tarn-et-Garonne, which cast its spell over Melanie and James Sewell, Charlotte Corner and Marcus Gough as soon as they first ventured there on holiday in 2014. It’s an area that’s often referred to informally as the ‘Tuscany of France”, yet in many ways this undersells the Tarn-et-Garonne’s diverse natural attractions.

Although it shares the same pillowy hills planted with vines, lush orchards and cheerful ranks of sunflowers as its Italian counterpart, the region is at the confluence of three large rivers: the Aveyron and, unsurprisingly, the Tarn and the Garonne. This creates another, more monumental landscape of canyons, gorges and high limestone plateaus. 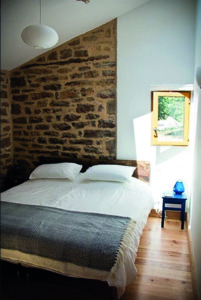 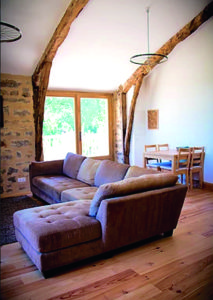 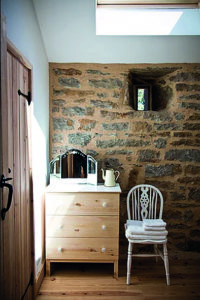 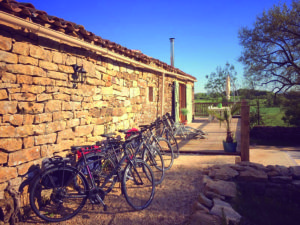 After several weeks spent drinking in the sweeping vistas and enjoying the hospitality of the perched villages and medieval riverside towns, sisters Charlotte and Mel and their respective partners, Marcus and Jim, were so collectively beguiled by the département’s numerous charms, they made the bold decision to band together and find a way to return here full-time.

“We were totally won over,” Marcus recalls. “We’d all spent lots of time holidaying across France as kids and adults, but this was the first place we’d all visited that felt like it had enough going on to really live in rather than just visit. Just as importantly, we’re all passionate about cycling and our dream was to run a business connected with that. We soon realised that Tarn-et-Garonne is a cyclist’s paradise. There are gentle slopes and picturesque plains for those who prefer taking it easy on two wheels, and plenty of tough but rewarding gorge climbs for those who want to challenge themselves. Best of all, there’s always a lovely town or village to relax in at the end of the trail.”

With their hearts set on the region, the first job on the to-do list was to find somewhere to set up home.

“There was the small matter of finding a place suitable for four us to live in which also provided enough space to accommodate the requirements of guests coming for cycling holidays,” explains Marcus, himself a dedicated club-level cyclist.

“We had to be as certain as we humanly could that this would work, as we were all about to quit decent, established careers to do this. I was in research at Warwick University, Charlotte was a PR manager, Jim was in finance and Mel was working at the Coventry Transport Museum. We’d all agreed we wanted to live this new life while we were still active and energetic, but we were all about to give up a lot for this dream – we had to get it right.”

The first step on this path involved arranging several months’ leave from work in order to fully explore and understand the region, while also viewing as many properties as possible. And with so much at stake it was little wonder that, after hours spent searching online, their shortlist of places to view still totalled 50 properties.

Thankfully, their diligence paid dividends when they eventually discovered the beautiful property they now call home. “It’s what the French call a corps de ferme,” says Marcus, “which essentially means ‘the body of a farm’ – the farmhouse and outbuildings, which are sold together but without the adjoining farmland, which is exactly what we have here.”

The farmhouse is large enough for the two couples to share comfortably, while the series of outbuildings are perfect for storing bicycles and the other equipment necessary for running the business.

A stunning stone barn has become glorious guest accommodation able to sleep up to eight people, and overlooks a swimming pool that just begs to be jumped in. Add a wonderful wrap-around veranda, set it all among rolling hills at the end of a quiet country lane, and you have the perfect recipe for relaxation at the end of a hard day exploring in the saddle.

“It was a lot of property for the price,” recalls Marcus. “And the location was perfect, but it certainly needed a pretty dramatic amount of refurbishment work.” Nevertheless, Mel, Jim, Charlotte and Marcus signed for the property in July 2015 undaunted, and very sensibly decided to employ the services of a local project manager to oversee the refurbishment. 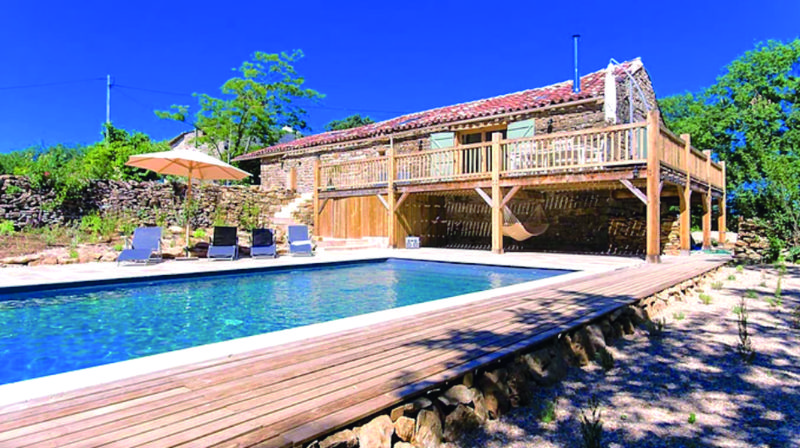 “None of us had a lot of experience doing this sort of thing – plus we were still all in the UK working full-time to try and earn every extra scrap of money this adventure would require,” Marcus says. “Every few weeks, Jim and I would leave work on Friday, get in the car and make the 800-mile journey down here to check on progress and help however we could, then drive back to Coventry for Monday morning.”

Meanwhile, the foursome were also in the throes of setting up Tarn Cycling Holidays, the business that would help sustain their new lives. And when it came to this next major step, once again, they were smart enough to seek out expert assistance. “We found another British couple who’d already started up a cycling tours business in France, and their advice was invaluable,” Marcus explains. “They helped us with everything, from the practicalities of the paperwork necessary for starting this type of business over here to the best kind of facilities to offer cycling guests.”

It’s clear that renovating a series of dilapidated farm buildings in a new country while simultaneously setting up your own business abroad is fraught with enough complications as it is – yet the four have also had to face the added challenged of growing their fledgling French business beneath the shadow of Brexit.

“We finally all moved here in June 2016 – the very same month the UK voted to leave the EU,” he adds wryly. “It was also the year that Charlotte and I decided to get married, and we had our first child, Amadie, which all made 2016 memorable, to say the least.

“We knew we’d missed the season by mid-summer, so our plan was always to begin properly in spring 2017,” he continues. “It gave us time to really explore and map the most beautiful local routes for cyclists of every ability and inclination; and so far the feedback from our guests has been fantastic. Interestingly, although we’ve seen fewer Brits in our first two seasons, we’ve hosted more Irish, Canadians and New Zealanders – so in actual fact, Brexit has already helped us focus and market ourselves more broadly in a way we probably wouldn’t have done otherwise.”

And if the old adage “location, location, location” is as important to starting a business as it is to finding a home, there’s no doubt these four intrepid 30-somethings have hit the jackpot.

“As a devoted cyclist myself I can say with hand on heart, this is a cyclist’s dream,” Marcus enthuses.

“We’re on the edge of the Tarn-et-Garonne, sandwiched between the neighbouring départements of the Tarn and Aveyron, meaning we have the very best of three wonderful regions to explore by bike from our doorstep. Our nearest neighbouring village, Saint-Antonin-Noble-Val, tucked beneath the towering cliffs of Roc d’Anglars, is a historic medieval gem. There are lush forests, spectacular ravines, bars above the clouds and picture-perfect riverside restaurants.”

“Whatever the future holds,” says Marcus, with an eye to the horizon, “these breathtaking gorges aren’t going anywhere – and neither are we.”

Previous Article French News: Arson, E-Scooters and Asterix’s New Heroine
Next Article How Do I Get An Internship in France?