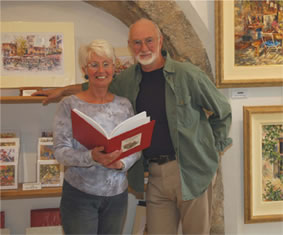 When my husband and I decided to come to France for a year in September 1999, we had no idea that five years later we would have a Galerie de Peinture, in Saint Antonin Noble Val, and that Tom would have a book published in English & French!

My husband is a professional artist & designer and the catalyst for this life-changing decision was a phone call to our home in Norfolk on a cold, wet February morning offering him an exhibition in France. Tom had already had three successful solo shows of his French paintings in the UK, so spending a year in southwest France was an attractive proposition. However, preparation for our year out required a lot of organising – not least of which was a passport for ‘Womble’, our large mongrel dog, and the Pet Passport scheme was in its infancy at that time. 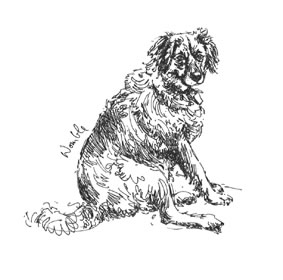 Fortunately, everything went smoothly on that score. We sold our home quickly, put all our possessions into store, purchased a large trailer, re-directed the mail, booked our ferry – and a friend found us a property to rent in France. (It all sounds so easy in retrospect but the reality was many months of heart-searching anxiety and frantic activity). A round of ‘Bon Voyage’ dinners and lunches organised by friends and family with tearful farewells followed – and we were on our way!

We arrived in France on a beautiful September evening; Womble had survived the ferry crossing and the long haul across France, and we were all pleased to be out of the car. The owners of the property were waiting to greet us and show us around, and we ate our first evening meal together on the large terrace at the back of the house, chatting excitedly about our plans for the next twelve months. Gradually over the following weeks we settled into a routine – I got to grips with trying to learn the language and driving on the ‘wrong’ side of the road, while Tom roamed the countryside in an ancient, bright-yellow French post van he used as a mobile studio. The weeks passed quickly – I joined a language class, visitors came and went, our two daughters joined us for our first Christmas in France, and the studio began to fill with canvasses and watercolours. Tom used the winter months learning to use the computer he had bought just before we left France – this too, was to have another huge impact on our lives here. 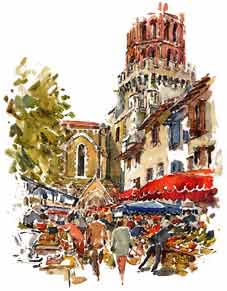 The following July after only ten months in the country, on our weekly visit to the Sunday market in nearby Saint Antonin, we saw a small double-fronted boutique which was empty and available for rent. Tom commented that it would make a lovely gallery and after speaking with the owner in a moment of madness, we decided to take it for a year and extend our time in France. We paid our deposit and walked away with the keys to the shop that same morning – two weeks later with very little French language, Galerie Tomás King opened for business! The whole process had been very casual and done on a hand-shake, only then did we ask the question – ‘what do we do now?’ The owner gave the classic French shrug with hands opened palms up in front of her, cheeks blown out in a ‘poof’. We were on our own. In the end it was our bank who put us on the right track and told us we needed to register with an organisation in Montauban, our centre of commercial activities, and obtain a Siret Number which would allow us to trade legally. It took several visits to Montauban to eventually find the right organisation (which turned out 3 years later to be the wrong one!)

With my limited language skills it was a nightmare finding our way around the endless form-filling and bureaucracy, and we came to the conclusion that in France filling in forms is a sport! However, we made progress and eventually became registered as a Micro Enterprise. Two months later the bills (cotisations) began to arrive and we had no idea what they were all for. We were pleased to learn that we had automatically been signed up to the French medical system and our Carte Vitale arrived soon after. In the meantime despite our difficulties understanding French commerce, our little Galerie de Peinture and Tom’s work was attracting a lot of attention – it was in the middle of ‘The Season’ and the summer visitors were much in evidence. We sold the most expensive oil painting within the first few weeks of opening and I was growing in confidence with the language. But by the end of the first week in September the visitors had departed and the town, which had been ‘heaving’ with people and activity for weeks, ‘died’ overnight. This came as a surprise because we had not expected the season to be so short and had imagined there would still be lots of visitors around until the end of October. We were even more amazed when some of the shops closed down completely and did not re-open until the following Easter. There was a second ‘wave’ of visitors in the middle of September for a couple of weeks, and we consoled ourselves that from the beginning of November the galerie would be busy again with people Christmas shopping – nothing could have been further from the truth! Another disappointment – in England the lead-up to Christmas was a busy sales period and someone always bought one of Tom’s paintings late on Christmas Eve. January, February, and March remained very quiet and the beginning of April was no better: we were on a one-day-a-week regime – not through choice but because the Sunday market in St.Antonin attracts a lot of people and we could always guarantee sales on that day. Our spirits, which had been so buoyant a few months earlier spiralled down, and we were seriously worried about our situation. The cotisations kept coming every two months regardless of there being little, or no business.

That was four years ago and we are only now beginning to fully understand the complexities of being commercants. Opening a retail outlet in rural France and asking questions later is not a good idea, and we would not recommend anyone to do the same, particularly with almost no French language! Do your research carefully in advance especially with regard to banking practices, which are not the same as the UK. You are unlikely to be offered more than a very small overdraft facility (if, at all), and there are punitive charges for being overdrawn. Do not write a cheque if there are insufficient funds to cover it – it is illegal in France. Visit your local Chambre de Commerce or speak to an accountant – do both!

Find out what it will cost you to operate your business. Is there a market for your product – what level of trade can your expect. It’s expensive to have credit card facilities because you have to rent the machine but pay a lower commission on each transaction. This can be galling if your trade is seasonal but you still have to pay rental when there is little, or no trade. On the plus side you are more likely to be able to rent your premises for six – twelve months with the option to renew, particularly if you live in an area which relies heavily on tourist trade, and shops open and close within the same season.

Despite the difficulties our Galerie de Peinture has been a success and we have relocated three times within St. Antonin since 2000 (the flexibility of renting) – each time gaining larger premises. Tom has had three solo shows in the Département, exhibited at International Salons in Albi & Montauban, and received medals and diplomas in recognition of his painting and artistic merit. Having previously only sold through other galleries it gives him immense pleasure and satisfaction to actually meet the clients who buy his work, and they are delighted to meet the artist. I have grown hugely from the experience but am still trying to get to grips with the language! Without the galerie we would never have met the many French people who have become our friends and are so supportive of our enterprise. 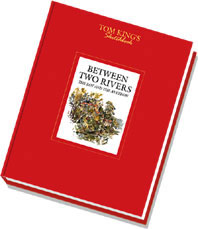 In October 2004 Tom King’s Sketchbook Between Two Rivers – the Lot & The Aveyron was published in hardback with 96 pages & 90 colour illustrations. It tells the story of our time in France and is a celebration of every-day life in words and pictures of this beautiful and fragile region of France. Originally a smaller, hand-made version was produced on the computer, so all the hard work during the winter months learning the complicated design programmes paid off. An introduction to a French publisher immediately led to a translation into French, and Entre Deux Rivières was published in July 2005.

Little did we know on that long ago September morning when we watched the cliffs of Dover fade into the distance, that we were embarking on a journey with no particular end in sight.

Tom King was born in Dublin in 1946. He has had numerous one-man shows in England, France & Ireland, and exhibited widely in mixed exhibitions including The Royal Society of Artists in Watercolour & The World of Watercolour & Drawings. He is a member of The Water Colour Society of Ireland and ‘Les Arts et Lettres de France’. His work is held in corporate and private collections world-wide.