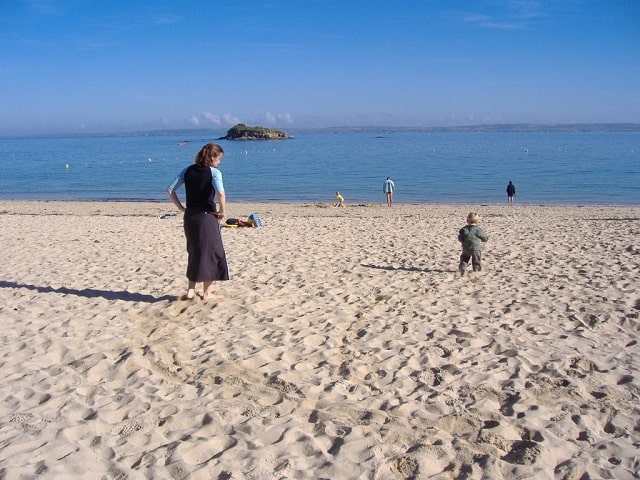 This is our eleventh summer living in France and no two summers have been the same.

Our first summer living here was a challenge as we were still finding our feet: living in France was still new to us, and while we’d lived in a picturesque area of Gloucestershire before, we hadn’t lived by the sea. I think my other half spent so many hours at the beach that he could have compared his skin tone to a chart for shades of timber. I, on the other hand, have a typically English complexion and successfully achieved shades of bright pink, painful pink and freckles, but for most of the season looked like a crabstick. To be fair, my first summer in France was focussed on our eldest who was then only 18 months old and has a similar complexion. He’d thankfully moved beyond the phase of trying to eat sand (“Yuk, mummy!”) but very much tried to avoid attempts to apply sun cream (“No thank you, mummy.”)

The following year, 2006, was an absolute scorcher and we had a newborn. So most of that summer was spent standing by fans, sheltering in the shade, and occasionally exclaiming to other people about the heat (the rather redundant “Isn’t it hot!” to fellow English-speakers, and “Dis-donc, c’est incroyable comment il fait chaud!” with the French). That was also when I learned the word canicule (heat wave), which at first I imagined had something to do with dogs (no, don’t giggle – think ‘canine’ and you’ll pardon my initial confusion, but you can imagine the conversations….).

Then, as many of you will remember, there were some not-so-great summers here in Brittany, and I have a many amusing photos of the children in August in rain ponchos looking doubly miserable – firstly, because it was chucking it down, secondly because their mum had put them in rain ponchos.

When the boys reached two-and-a-half and four-and-a-half, I had the wonderful idea of applying to work in a Tourist Office. I had a background in marketing and sales, knew the area, spoke French, English and a handful of German and thought it would be good route towards a steadier job. Up until then, I’d been juggling motherhood, freelance journalism and private tutoring, so a full-time job in a Tourist Office seemed like a break.

Only those who have ever faced a wall of hot, impatient tourists on a Sunday in August can understand the intensity of this experience. I was right about enjoying the work, and I was right about it improving my French and improving my career chances, but it was seriously hard work. The toughest part, which will be obvious to anyone given a moment to think about it, was the transition between working part-time from home to not seeing my youngsters for five or six long days a week at the very time when they were off school. I spent two summers in a Tourist Office (tough work, pleasant people) and one season in a campsite (tough work, awful people, and we try never to speak of this).

At the end of my third summer helping everyone else to relax and have fun while I perspired in very hot offices, I decided this couldn’t be a long-term option. I was missing summer, only grabbing an occasional hour on the beach at lunch-break, and I was completely missing summer with my children, as our main holidays had to be taken in October half-term. Then I’d spend autumn and winter trying to cram in freelance projects and tutoring again to make ends meet until the next summer. No, it had to change.

In 2011, I took the plunge and set up my own business, writing, translating and training. It meant that I could use my experience from the UK and from France to focus on tourism and marketing projects, that I could work from home and that I could be more flexible. (I say this as if I am incredibly relaxed about my working week, but anyone who knows me would ruin this illusion by revealing that I work far more hours than is quite normal.)

That was the first summer I was able to take time off in the summer like normal people do, and go on holiday with my family. We toddled off exploring France with all its nooks, crannies, mountains, lakes and beaches and still came back feeling we’d only seen a fraction of what was on offer (which was absolutely true). Since then, we’ve tried holidaying at the very start of the season, in the last week of August, and in the middle of the holidays. Apart from when our ancient Fiat Punto overheated once on a dual carriageway, they’ve all been packed full of fond memories and each summer has been uniquely fabulous.

These days, every summer is an opportunity to explore a different part of France. It’s like a sweet shop for anyone who loves travel, because you don’t even have to leave the country to have countless different holiday landscapes. It really is a microcosm of European landscapes and environments, endlessly diverse. I love it.

The biggest contrast work-wise is that nowadays, my most intense work period is in May and June, when my tourism clients are preparing for the season – July and August are, by contrast, mercifully calm. While this means that there’s a mad rush towards the summer – rather like running downhill and you think your legs might just give way at any moment – July then arrives and the kids dash out of the school gates and we’re off.

This year is already a scorcher. Throw in a coastal camping trip and a city break and it’s shaping up nicely. Then, when I come back, my summer will consist of alternating a bit of work with a few hours of lounging on a swinging sofa with a cold drink and a book (surely the ultimate way to relax).

Some things never change, though. I still turn painfully pink, my husband manages to spend one hour in the sun and turn the colour of a walnut sideboard, and the children still run away at the mention of sun cream…