The British Rugby Club of Paris 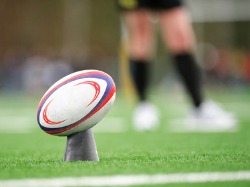 The British Rugby Club of Paris was formed in 1923 by British expats living and working in Paris, playing friendlies and touring. After WWII the club joined the Corporate League in the Ile de France section of the Federation Francaise de Rugby. The teams have always been very competitive in this competition and have won top honours a number of times.

The club fields a 1st XV side on Saturdays, competing against other corporate teams in the greater Paris area. The BRFC also regularly plays host to ‘touring sides’, particularly during international match weekends (6 nations) and takes part in at least one seven-a-side and one veterans’ tournament every year. Players range in age from 20-35.

Accounting for normal league games and cup games, not to mention friendlies, sevens tournaments and so on, players can be expected to play around 20 games in a season. Club trainings are held on Wednesday nights only with complementary fitness sessions also organised by individual players. We train and play home games in Domont, a town 20 minutes to the north of Paris by train which provides the club with top notch facilities (grass and all-weather pitches) all year round.

BRFC is perhaps best revered for its atmosphere, both on and off the pitch. Weekly post-match celebrations are held at sponsor venue The Bowler pub, just off the Champs Elysées, where discounted beers and food are put on after all games. The establishment also hosts the club’s regular pub quiz on Sundays.

All in all, the British Rugby Club is a great way for any newcomer to meet a bunch of new people very quickly. Not all players and members are British, as the club reflects the thriving international community in Paris. The club is defined as an expat team more than it is an exclusively British one, and the diversity does add to the quality and the atmosphere of the club. An increasing number of French players have also joined in recent seasons, preferring us to French teams for the esprit d’equipe and needless to say, all are welcome.

Finally, we go on tour at least once every season and have already visited such diverse and fun places as Cardiff, Amsterdam, Madrid, Rome and Bayonne, with more exotic locations to follow. Tour is widely acknowledged as being better than Christmas – an event not to be missed.

If all this tickles your rugby and social taste buds, don’t hesitate to get in touch with the club directly. A member of the management committee will be happy to provide all interested parties with further information. To do so, head to the BRFC website or go straight to the contact form.