Get your five a day the French way 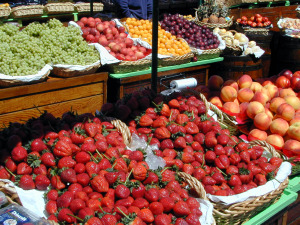 The French are very keen on seasonal produce, and amongst the ever changing array of fruit and vegetables on offer at France’s markets and restaurants, expatriates might discover produce unknown to them.

Coco de Paimpol
Distinctive white beans from Brittany, encased in pale yellow pods. The nutritious Coco de Paimpol was the first bean to be awarded a prestigious AOC label. Incorporate them into a salad or later on in the year, a traditional French style cassoulet or soup – these beans go with everything.

Oignons de Roscoff
The pink onions from Brittany not only look good but are rich in vitamin C. Eaten raw or cooked, this variety is sweet to the taste with a slightly fruity flavour. Furthermore, Roscoff onions are said to have health benefits for diabetics and those suffering from osteoporosis, respiratory and cardiovascular ailments.

Mirabelles
These golden plums are a speciality of the Lorraine region. Deliciously sweet, they are often eaten fresh but also lend themselves well to jam-making and are commonly used to make plum brandy. Local patisseries make tarte aux mirabelles but you can easily incorporate the fruit into a range of homemade desserts.

Pêche plat
The literal translation is ‘flat peach’ and that’s exactly what they look like. Their ‘squashed’ shape has its advantages, making them easier to hold. Flat peaches are easily broken in half to remove the stone, which makes them less messy than their more rounded counterparts. They have a delicate yet very sweet taste.

Salsifis
Salsify is a root vegetable and as such can be prepared in pretty much the same way as a potato. Salsify looks like a long, thin, brown carrot and is sometimes referred to as the ‘oyster plant’ because of similarities between its taste and that of an oyster… Typically found in traditional dishes from the Dordogne.

Figues de barbarie
In the south of France where it’s hottest, you might notice prickly pears, also known as cactus figs. Fuchsia pink when ripe, the skin of a cactus fig is marked where the spines have been removed but the fruit still needs peeling. The pulp inside is bright red and tastes like watermelon. Often pureed or used to add colour to a dish.

Artichauts
As one of the main producers of artichokes, France also consumes more of them than most. The majority are grown in Brittany where the most popular variety is the green ‘Camus de Bretagne’. The ‘Violet de Provence’ on the other hand has a striking purple head. Artichokes are high in fibre and good for the digestion.

Mesclun
A mixture of fresh young salad leaves packed with vitamins and minerals. Mesclun originated in Provence and may include leaves of rocket, chicory, lettuce, chervil, sorrel, dandelion and radicchio. A light vinaigrette is enough to bring out all the flavours.

French endive
Used raw, endive is a good alternative to lettuce and a great addition to salads. Its white leaves have a slightly bitter taste. Care must be taken to remove the inner core and tougher base of the plant before serving. French endives are also used in a range of cooked meals, stuffed and baked.

Grow your own vegetables in France

How to Be a Vegetarian in France

Working up an Appetite