How to visit Champagne-Ardenne in style 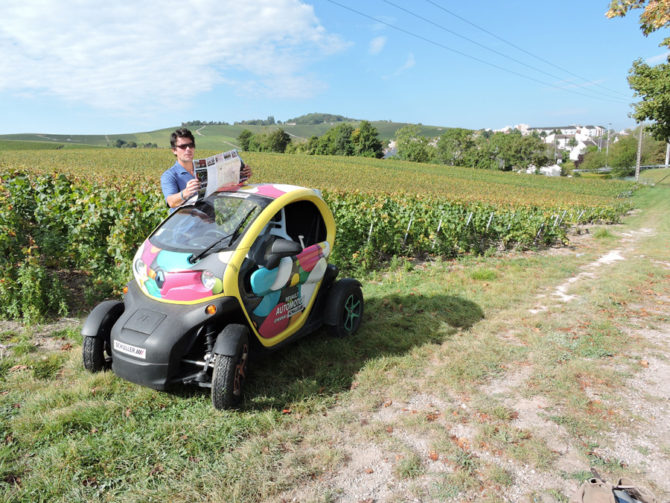 Recently, I had a somewhat panicky conversation while driving an iconic Citroën 2CV through the back roads of the Champagne-Ardenne. Rather unused to driving this classic voiture, my foot had been pumping the brake pedal without achieving a great deal of deceleration. Sweat had appeared on my brow and in the rear-view mirror I could see that my face was turning an interesting shade of off-white.

“I am using the brakes!”

“Well, why aren’t we slowing down?”

“Because the brakes don’t work properly!”

Fortunately, once I’d pushed the pedal right to the metal, the brakes kicked in and we slowed down. From then on I decided to approach every junction with a bit more care, and a little less speed.

We’d hired the 2CV to explore the back roads of the Champagne-Ardenne, as part of our overall mission to experience the huge amount that this north-eastern region has to offer, utilising every imaginable form of transport. By the end of the weekend we didn’t know if we were coming, going, driving, floating or flying. But we had a great deal of fun doing it!

Our odyssey began with a swift Eurostar journey from London to Paris followed by an equally swift TGV trip from Paris to Champagne-Ardenne TGV station, in Bezannes. With a journey time of 40 minutes for the latter, I calculated that we must have averaged 120mph – by far the fastest we’d be travelling all weekend.

Our first night was to be spent high up in the trees, at an adventure park called Le Chêne Perché, near the Ardennes town of Signy l’Abbaye. In addition to a range of tree-climbing activities – rope bridges and swings, zip wires, cable crossings – it also offers accommodation in treehouses. There were four beautiful wooden houses in all, the lowest perched three metres above the ground and the highest a dizzy 16 metres up in the canopy. We laid our own heads to rest a little lower than the latter, at 13 metres high. In the morning, our breakfast awaited us on the forest floor, in a basket at the end of a very long rope pulley.

But before we settled into our leafy home, we had to experience some of the adrenalin-spurring rides on offer. What followed was a challenging and sometimes scary – although perfectly safe – climb along a forest obstacle course, high above the ground. I shuffled along steel cables strung between the trees, hauled myself up climbing nets, clambered across tricky rope bridges and was encouraged to swing like Tarzan, from one high tree platform to another, but I baulked at that. The final obstacle was a Tyrolean zip wire that ran high and fast through the trees.

The manager and owner of Le Chêne Perché, Clément Nemery, prides himself on not offering his guests any mod cons whatsoever. There’s no running water (ablutions are performed into a dry toilet) or electricity, and certainly no TV and mobile wi-fi.

“It’s all about disconnecting from the pressures of the modern world, and getting back to a primitive life,” he says, encouraging his guests to find their
inner Tarzans and Janes.

Technology was also fairly thin on the ground the following morning, when we took possession of our hire car. Old-school brakes notwithstanding, Citroën 2CVs are always great fun, even if your average 21st century toaster is considerably more hi-tech than the entire inner workings of this classic French car. You can’t help admiring how, back in the 1940s, when this vehicle was first invented, Citroën managed to squeeze its design past France’s ever-eager health and safety bureaucrats. The umbrella-like gear stick, the hairdryer engine, the sardine-can roof, the tinny bodywork – I’ve seen more advanced machinery on Fisher-Price toys, and I should know, having spent my entire twenties driving a loveable ‘Deux Chevaux’.

Nevertheless, we had a brilliant time in our 1980s model – top speed about 50mph, braking distance about 500 metres! – whirring down the Ardennes’ roads, and visiting the star-shaped, fortified town of Rocroi and the famous Monthermé, which clings to an enormous meander in the River Meuse. Finally, we parked up at an adventure park in Fumay called Terraltitude, where we were due to experience the giant zipwire known as the ‘Fantasticable’.

If you’ve ever wanted to feel like Superman, this is your chance. Once we’d been driven to the top of the hill, 360 feet above the Meuse Valley, we then took turns being strapped into a harness and a trolley, to be launched head-first on a 3/4-mile journey across the valley, reaching 68mph at terminal velocity. Just as I was about to take off on my maiden flight, my instructor explained how the harness ropes at the end of the zipwire are changed every 2,500 flights “for safety reasons”. We were the first to use the new ropes and I wasn’t sure whether this was a reason to be confident or worried – I decided on the former! My flight was all over in just over a minute, but the views across the Meuse were astounding. That must be the closest you can get to paragliding without tediously needing to acquire a number of qualifications beforehand.

Getting in a ‘Twizy’

The next stop was Epernay where our hosts had kindly arranged for an even more bizarre form of transport: a Renault Twizy. A cross between a go-kart and motorcycle, it’s battery-powered, very low to the ground, less than eight feet long and seats two, one behind the other. Both of us are tall men and barely squeezed into the Twizy, but as we zipped through the vineyards around Epernay, we pushed the vehicle to its limits, reaching over 50mph before the limiter kicked in.

It was grape harvest season in Champagne, which meant that every vineyard was in full swing, teeming with pickers who had congregated in the region from all over Europe. We stopped to watch them at work. What our hosts had omitted to tell us about the Twizy was that you can’t start the motor unless you have your foot on the brake. Then followed an embarrassing half hour as we waited by the side of the road for the director of the tourism office to come and save us, which he gallantly did.

Rollin’ on the river

So we’d ridden the rails, travelled by road and flown through the air. All that was left was the water…

Fortunately, the next place we visited, Châlons-en-Champagne, boasts a beautiful network of rivers and canals – the River Marne, the Mau, the Nau, the Canal Latéral à la Marne and the Canal Louis XII – which flow gently through the city, or beneath it in underground tunnels. “The sparkling Venice” is how the tourism board describes it, with a little poetic licence.

Originally used for transport and powering the city’s mills, nowadays this aquatic network is for tourists. Motorboats offer a tour through the tunnels and past the major sights. As you cruise past the back doors of historic buildings and huge townhouses, and duck to save your head from a bruising on the tunnels, you get a view of Châlons that you’d never see as a pedestrian.

Segue to a Segway

Our final form of transport was possibly the strangest of all. Châlons’ tourist office decided we needed to be initiated in the way of the Segway. For those of you who are unfamiliar with these contraptions, they’re two-wheeled, electricity-powered stand-up scooters.

In a cruel twist of irony, the multimillionaire British owner of the company that manufactures them died after plunging his own Segway over an 80-foot cliff near his home in Yorkshire. I was reassured to notice there were no cliffs in Châlons-en-Champagne, and thus I felt perfectly safe, once I’d got the hang of riding the Segway, which took but a few minutes to master.

Thanks to the Segways, our tour of the town was fast and comprehensive. Within a short hour we’d seen all the city’s major sights and terrorised most of its citizens with our two-wheeled skills. And we’d barely burned a calorie in the process – if these things become popular, I predict that we’ll all be obese in the future. It was the perfect conclusion to a glorious weekend of exploration by unusual transport.

● Dominic Bliss was a guest of Champagne-Ardenne Tourism and travelled on Eurostar and SNCF.

Previous Article French Business and Pleasure for this Renovation in Normandy
Next Article Shopping in France: A guide to supermarkets and DIY stores

Five Buy-to-let Picks by the Beach