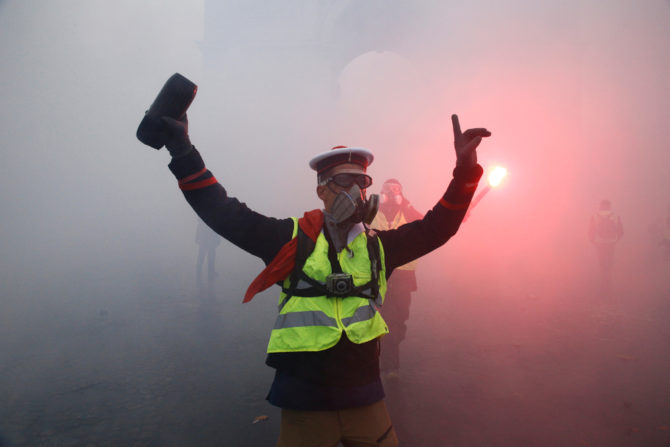 If you’re thinking about moving to France, you need to stay up-to-date with the latest news. We’re taking our weekly look at the French headlines and summing up the stories you need to hear.

To the chagrin of the French government, the Yellow Vest movement celebrated its one-year anniversary with another weekend of riots and protests. President Macron is expected to announce substantial investment in hospitals in a bid to subdue unrest in the healthcare sector. Concessions have already been made in retirement rules for firefighters.

The Mayor of Paris has raised concerns over the selection of Airbnb as a sponsor for the Paris 2024 Olympics. Anne Hidalgo opposed the partnership, claiming that the home-sharing company is a contributing factor to rising rent in the nation’s capital. She has vowed to hold a referendum on the presence of Airbnb in Paris and has regularly called for stricter regulations on the rental market.

A Brit living in France has decided to run as an MP against Boris Johnson to highlight the plight of Britons abroad. William Tobin was disappointed to discover that he is no longer eligible to vote in UK elections from France as he has lived outside of the UK for over 15 years. He is, however, entitled to run as an MP. Tobin’s campaign materials make it clear that he is running to raise awareness of the limited voting rights of Britons abroad, and not as a serious bid for election. He is running with the campaign slogan “DON’T VOTE TOBIN LET TOBIN VOTE!” and is running a crowdfunding campaign.

In a landmark move, Paris has voted to ban authorisation of circuses using wild animals from the end of 2020. The measure has been under discussion for the past two years and has received widespread support. This rule won’t affect circuses that own their own land already. The news comes after a rare white tiger escaped a Paris circus in 2017 and was subsequently shot to death by its owner.

A suspension bridge at Mirepoix-sur-Tarn collapsed in the early hours of Monday 18th November. Two people have died, and others were seriously injured, as at least two vehicles plunged into the water below. Many are feared missing, and an investigation into the safety of numerous French bridges has been called for.

Early snow has brought with it both good and bad news, in the form of a road chaos and a boom for French ski resorts. Drôme, Ardèche and Isère were hit by a surprising amount of snow, causing issues for drivers, with some stuck on the road for hours. More snow is expected this week, with ski resorts hoping for a long ski season.

After last week’s earthquake, scientists are investigating whether human activity is to blame for the seismic activity. The team is looking into the likelihood that nearby quarrying could have caused the 5.4 magnitude quake, which caused damage to buildings near Montélimar.

A brown bear released in the appropriately-named Béarn last year has been captured on film. Sorita appeared to be in good health, exhibiting normal behaviour and may even be expecting cubs. The six-year-old Slovenian brown bear has been spotted in areas known for plentiful food and has integrated well in her new environment.

The England Women’s rugby team narrowly beat France with a late try by Lydia Thompson in the Autumn internationals. The game was scrappy and riddled with errors but marked England’s fourth consecutive win over France.

Olivier Giroud scored a winning penalty against Moldova, sending France to the top of Group H for the Euro 2020 qualifiers. This is despite an early goal from Moldova’s Vadim Rata. The final score stood at 2-1 to France.

French cycling legend, Raymond Poulidor, has passed away aged 84. He was best known for finishing on the Tour de France podium no fewer than eight times without ever winning, earning the nickname “the Eternal Second”.

The French Film Director’s Guild is proposing new measures to exclude members charged or convicted of sex offences, which could lead to the suspension of infamous director Roman Polanski. The follows on from the Me Too movement, which highlighted sexual violence in workplaces, particularly the film industry. Polanski still has a judicial case against him in the states, making him a controversial figure in film.

Previous Article Could France be reforming inheritance and gift taxation?
Next Article 5 Must-see Essentials in Chartres