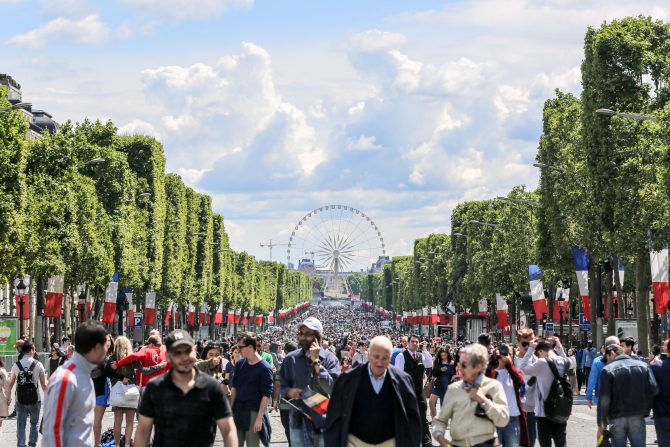 French PM Elisabeth Borne survived a vote of no confidence yesterday, while France braces for yet another heatwave just in time for Bastille Day celebrations. Here are the French news stories you need to know about this week.

1. PM Survives Vote of No Confidence

President Macron’s government, led by Prime Minister Elisabeth Borne, has been off to a shaky start since the President lost his majority in the parliamentary elections and reshuffled his cabinet last week. Yesterday (July 11), it was dealt another blow as the PM faced a vote of no confidence put forward by the left-wing NUPES alliance (the New Ecological and Social Popular Union headed by far-left presidential candidate Jean-Luc Melenchon).

The PM survived the vote, with only 146 lawmakers voting against her (notably five short of the 151 MPs that make up the NUPES alliance). A total of 289 votes is required in order for the vote to pass. The unsuccessful result was expected, as both The Republicans and Marine Le Pen’s National Rally had previously stated they would not support the vote—instead, it was seen as a display of the alliance’s intention to make things difficult for the President and his government.

Borne appeared to address this in her speech to parliament prior to the vote, saying: “Ladies and gentlemen, today we could be working for the good of the French people. Instead, we are debating a no-confidence vote that is based on my alleged intentions, and that stands in the way of parliament’s work and therefore of the wish of the French people,”

She also referred to the no-confidence vote as “political tactics” and ended by proposing: “Let’s switch together to a culture of compromise”.

2. France Braces for Another Heat Wave

Less than a month ago, France experienced the first of what looks set to be a series of heatwaves sweeping the country this summer. Now, Meteo France is warning of an even longer heatwave or “canicule” this week with temperatures reaching over 30°C throughout most of mainland France, up to 36°C along the Atlantic Coast and through the Rhône Valley, and upwards of 38°C in southwest France.

The 13 French departments on yellow alert as of yesterday (July 11) are Morbihan, Loire-Atlantique, Vendée, Charente-Maritime, Charente, Gironde, Landes, Haute-Garonne, Tarn, Gard, Vaucluse, Ardèche, and Drôme, which comes with recommendations to hydrate and stay out of the sun, along with heightened risks of wildfires.

The heatwave is predicted to last for 10 days or more, with temperatures reaching their peak (possibly hitting 40°C in some areas) this weekend (July 16 and 17).

As temperatures heat up, France will also be getting in the festive mood this Thursday, July 14th, as the country celebrates its “Fête Nationale” (National Day), known internationally as Bastille Day. After two years of festivities being hampered by Covid-related health restrictions, this year sees a return to tradition, which includes the grand military parade along the Champs-Elysée in Paris, attended by the President and visiting world leaders.

This year’s parade will be a show of solidarity with Ukraine and the unity between eastern and western Europe, with soldiers from nine eastern European countries—Bulgaria, Czech Republic, Estonia, Hungary, Latvia, Lithuania, Poland, Romania, and Slovakia—joining the French and French Foreign Legion troops.

Thursday is a public holiday or jour férié, so expect shops and businesses to be closed throughout France, and many towns and villages around the country will be hosting special events and fireworks displays in honour of the occasion.

As the day falls on a Thursday, many businesses and workers will make the most of the opportunity to “faire le pont” (make the bridge) and enjoy a four-day weekend.

The Guardian broke the story yesterday (July 11) of the “Uber Files”, a trove of more than 124,000 documents shared by whistleblower Mark MacGann, a former chief lobbyist for the tech giant, that show the company “flouted laws, duped police, exploited violence against drivers and secretly lobbied governments during its aggressive global expansion”.

In a shock twist, French President Emmanuel Macron was also implicated in the scandal, with a series of leaked text messages between the now-president and Uber executives between 2014-16 revealing him to be a major ally to the cab-hailing company. Macron, who was the French economy minister at the time, was shown to have championed Uber’s lobbying campaign in France, aiding the company to gain ground amid France’s “closed-shop taxi industry”, and going to “extraordinary lengths” to support them, even apparently brokering a “secret deal” with the French cabinet.

This comes at a bad time for Macron, who is already struggling to bring together his new government, and unsurprisingly received criticism from his opponents. Mathilde Panot, leader of the left-wing France Unbowed party, took to Twitter to describe Macron as a “lobbyist for a US multinational” whose aims were “to permanently deregulate labour law”, while Fabien Roussel, leader of the Communist Party, denounced the revelations as going “against all our rules, all our social rights and against workers’ rights”.

Previous Article Why buy in Perpignan? French Buying Hotspot
Next Article Should You Sell Your French Property Privately or Use An Estate Agent?