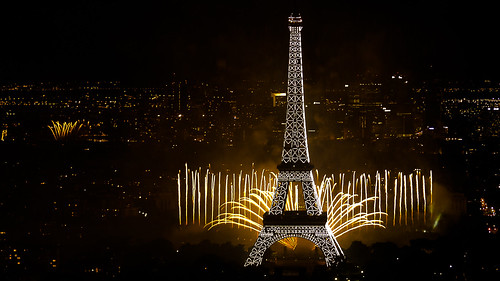 Bastille Day on the 14th of July is the celebration of the French National Day, commemorating the oath of July 14th 1790 – exactly a year after the storming of the Bastille – the act that gave birth to the Republic. There’s parties and gatherings in every little village across the land, with barbecues and fireworks, music and dancing into the night, and of course Paris turns into one big fête.

If you happen to be in Paris:

There’s the traditional military parade along the Champs Elysées.

With all those fireworks going off it’s a busy night for the firefighters but they’ll have plenty of company as the different casernes or fire stations organize an evening ball from 9pm to 4am. (There may be an entrance fee or may see the traditional ‘barrel’ left out for those who wish to make donation towards improving the working conditions of the pompiers). The dress code is decent but informal – no ballgown required.

Find a firemen’s ball near you.

The crowning event is the fireworks display at the tour Eiffel. Second to crashing a party in a townhouse with a balcony facing the tower, the best public viewing spot will be from the Champs de Mars and Trocadéro, although the view from Sacre Coeur in Montmartre is nothing short of spectacular as well, with the twinkling City of Light at your feet. The show starts at around 10:30-11pm and lasts around 35 minutes.