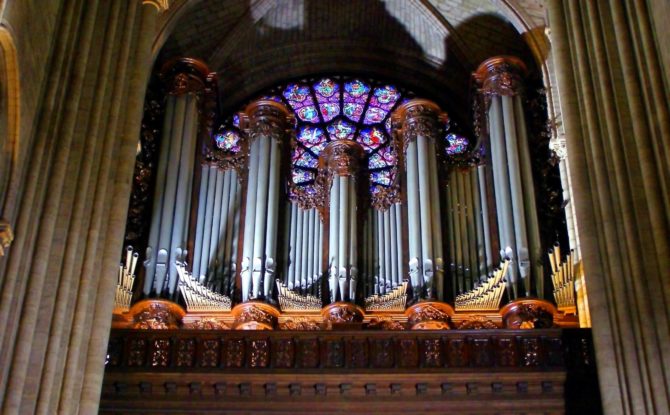 I remember vividly my first visit to Notre Dame. I was 18 and somewhat overwhelmed by the city. It was stormy, which gave the light coming in through the stained glass an eery hue. As I set foot inside, the organ was soaring at full force and the sheer energy of the music instantly transported me to another place.

That feeling has stayed with me ever since, and I supect I am not alone. Many, many people before and after must have had a similar encounter with pure beauty, listening to such music in such a setting. Fast forward to 2014, and among the many events that took place last weekend of September 20-21, the two days of the Journées du Patrimoine, there was one that may have been relatively buried by the deluge of other options and events available to visitors.

The weekend, held every year in September, is an occasion for national monuments to open their doors not only in France but across Europe, including sites of historical or cultural interest that are not normally accessible to the public. The spirit of the weekend is to ““raise the awareness of European citizens to the richness and cultural diversity of Europe”.

One of these special events was held at Notre Dame de Paris, always the belle of the ball, but most particularly on these two concerts held last Saturday evening and Sunday afternoon. After the new and improved bells, it was the turn of the Grand orgue, Notre Dame de Paris to shine. The overhaul triggered by the 850th anniversary of the cathedral led to this most recent revamp. It’s transmission was renovated, all 8000 pipes cleaned, the face restored, and some registers replaced back to its deserved glory.

The great organ, dating back to the XIIIth century, is the main instrument of its kind in France and arguably the best known in the world.

The good news is that if you missed it this weekend, no problem, you can still enjoy the special concerts celebrating the restoration of the Great Organ until October 7, or one of the regular sessions during the year at the fingertips of the 3 main organists, Olivier LATRY, Philippe LEFEBVRE and Jean-Pierre LEGUAY, or even one of the auditions by the guests organists who come from all over the world specially to play this very special instrument. These auditions take place on most Sunday afternoons just before Vespers service.

Because Notre Dame is such a celebrated tourist icon, it is easy to forget that is is a sacred place of worship and, as such, follows a lithurgical calendar, so there are no auditions during Lent, for example. It’s advisable to check ahead before you go to see when you can best catch a concert on the grande orgue.

Ready for more after your concert at Notre Dame? Here’s a guide to the best addresses to spend 48 hours in Paris.

Check out the properties that Paris has to offer.

Previous Article A year in Périgord: why I love the Dordogne
Next Article French Work Culture from an American Perspective