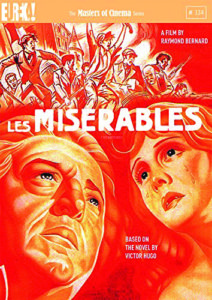 Eureka Entertainment does splendid work in releasing classic, often overlooked French films for the DVD generation and this high-res ‘4K’ restoration of Bernard’s epic, almost five-hour adaptation of Hugo’s novel is a welcome addition to the canon. Harry Baur plays Jean Valjean, the ex-convict struggling to redeem himself in the face of the cruel, vindictive police officer Javert (Charles Vanel). Wideley acknowledged as being the most thorough of all ‘Les Mis’ film adaptions, this originally hit the big screen as three separate releases, and you may want to plan your own intermissions before settling down to enjoy this sprawling storytelling epic…★★★★