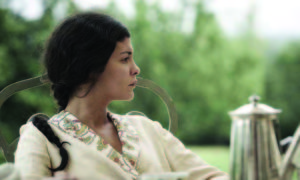 Young, rich and bored by provincial life, Thérèse (Audrey Tautou) is a compelling, complex character who believes that marriage to the rather boring Bernard (Gilles Lellouche) is what’s expected of her. Their marriage seems doomed from the outset as the couple joke that they’re uniting over their love of the pines that surround them. While their marriage lacks passion and happiness, Anne (Bernard’s sister) embroils herself in an affair with an unsuitable suitor. Thérèse becomes jealous, and while cajoled by Bernard’s family into bringing an end to Anne’s relationship, begins to despise her own oppressive lifestyle and takes steps to end her turmoil. Perhaps not your ideal ‘date night’ film, this is a mysterious, gritty and well-cast film. ★★★