New Year in Paris? Head for the Champs Elysées 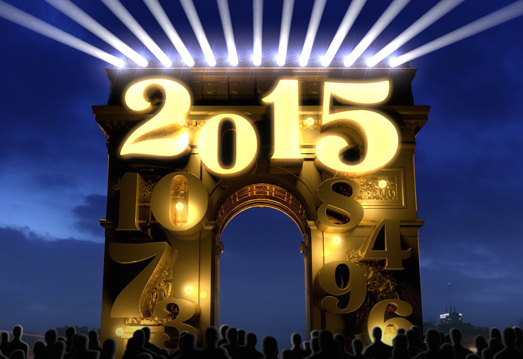 New Year’s eve is a grand affair in homes all over France, and Paris is the symbolic heart of the party. This year all eyes will be on the Arc-de-Triomphe as the focal point of the countdown to welcome 2015. The city is planning something a little special this year, in addition to the glittering cheer that it always offers with its holiday illuminations, dazzling shop window displays, and popular Marchés de Noël.

Betweeen 11pm on the 31st of December until 1am on the 1st of January, the top of the Champs Elysées avenue (between the Rond-point des Champs-Elysées and the Arc de Triomphe) will be closed to vehicles and open its arms to a flood of pedestrians to celebrate the stroke of midnight with a spectacular lights and “video-morphing” show projected on the Arc-de-Triomphe.

On New Years day, starting at 1pm until 6pm, the famous avenue will once again open only to pedestrian revellers to enjoy a festive grand parade at 2pm organised by Monde Festive, with fifteen fanfares from ten different countries, plus floats and performers from five renowned circuses.

The celebration on New Year’s eve in France is, not surprisingly, centred around the table. It’s called Saint Sylvestre in reference to the  33rd pope in Rome, credited with bringing about the conversion of Emperor Constantine. Today, however, the name is just about all that’s left of the religious nature of the party, and the celebration is mostly a fantastic meal shared with friends and family.

Folk belief dictates that a plentiful meal on New Year’s eve will result in a prosperous year ahead. The focus is not on quantity so much as quality.  While each region in France has its own traditional menu, a starter of oysters usually opens the feast. The larger the variety of dishes and the more special and authentic the ingredients, the better. The Réveillon is the culinary high point of the season.

Previous Article Normandy know-how with Calvados and Pommeau
Next Article Up in Smoke: Paris Revokes Ban on Log Fires