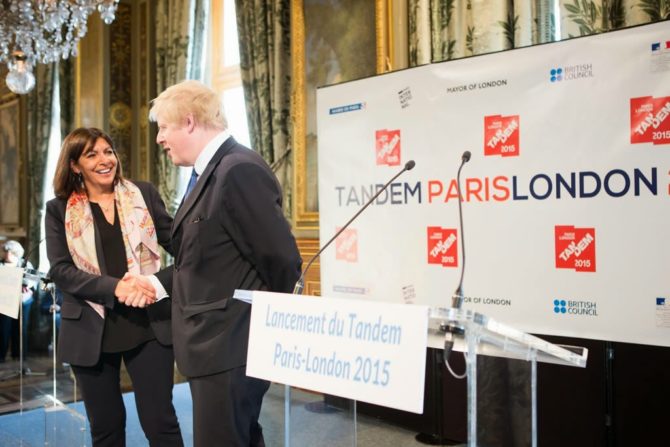 The two capital cities have locked in a tight cultural embrace to last throughout the spring and summer. From March to July, Parisians will be able to enjoy the British cultural scene in Paris and, reciprocally, Londoners will be able to see artists and performers from Paris and enjoy classic and new art. Sonia Delaunay’s work will be a guest at the Tate London and the Tudors will take up residence at the Musée de Luxembourg Paris. Different forms of expression and disciplines will be included in the exchange, including music, theatre, literature, the visual arts and cinema, as well as a special platform for emerging artists and young people.

There is usually a good natured rivalry and ribbing between the two cities. The mayors of the two capitals, Boris Johnson and Anne Hidalgo, joined forces to launch the events in a press conference in Paris last week. As reported in The Guardian, Boris Johnson stated that Paris and London had the same ideas about freedom of expression.

“Ah Boris, tu es Charlie?” asked Hidalgo, referring to the slogan that has been taken up to show solidarity with the journalists killed at Charlie Hebdo magazine.

David Bowie at the brand new Philharmonie de Paris
March 3rd – May 31st
Following its remarkable success at the Victoria & Albert Museum in London, ‘David Bowie is’ is coming to Paris. This critically-acclaimed exhibition retraces the transformation of Bowie’s persona, featuring previously unreleased material from his personal archives. Through more than 300 objects including the artist’s own photographs, costumes, drawings and instruments, this exhibition invites the visitor to experience Bowie’s extraordinary career in a new light.

‘The Tudors’ exhibition at the Musée du Luxembourg
March 18th – July 19th
This fascinating exhibition, organized jointly by the Réunion des musées nationaux and London’s National Portrait Gallery reveals the true face of the House of Tudor. ‘The Tudors’ showcases portraits, manuscripts, and other objects which help understand how this dynasty definitively changed the face of England between 1485 and 1603. The first exhbition on the Tudors ever organised in France, it also sheds light on the diplomatic relations maintained by France and England during that time.