Susannah Hickling meets a couple from Wiltshire who bought an 18th-century barn in the verdant Provence département of the Var.

FRENCHENTRÉE MAGAZINE: What brought you to live in France? 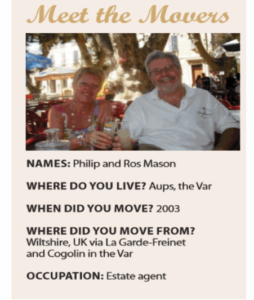 PHILIP MASON: I studied French and German at university and my wife Ros studied French and Spanish. We’d always loved France and all our holidays were taken there. My last two jobs in the UK had been for French companies and I was always hoping to be sent to France but they kept me in the UK. My son was nine and we said that unless we got him into the primary school system, he would flounder. So we thought we’ll do it now or never. Our son was fluent in French within six months.

FE: How did you find your house?

PM: Ros found it on the internet. We were living closer to the coast – where we’d been running a yacht sales and charter company, before I moved into being an estate agent – and were looking for a house to buy with another couple. This place suited us because it divided perfectly into two apartments. That was more important than location, though we’re now in the process of, hopefully, buying our friends out.

FE: tell us about the house…

PM: It’s an 18th-century converted barn in Aups. We found it on a cadastral plan from the 1800s – it belonged to the local priest. It had the space we wanted and two hectares of beautiful land planted out with olive trees, almond trees, hazelnuts, walnuts. The house had been unsympathetically renovated and extended in the 1970s. It took about a year to make all the modifications we all wanted.

FE: how did you find the buying process?

PM: I think the French buying process is fantastic. It isn’t simple but it’s clear and concise, and everyone is kept informed. In our case, it was pretty straightforward. Things took the usual 12 weeks, but it was complicated slightly by the house being in Aups, which we didn’t know well. Because it was also owned by an Aups family with a local notary, we thought we’d better get our own notaire to act for us as well. But it always takes more time when you get two notaries involved.

“Provence Verte offers the sought-after Provencal lifestyle and weather for a fraction of the price found in the Luberon or the Alpilles.…” – Gaëlle Perreaux, Property Services Manager, FrenchEntrée Property Service

FE: how did you go about renovating the property?

PM: We walked down into the village and there was a grotty little architect’s office with curling photographs in the window. We walked in, saw this gentleman and we thought, “yes, he seems all right”! He took us along to see a couple of places he’d done and we liked what we saw. The architect pinned us down on what we wanted doing, and translated that into drawings and a specification. He did a lot of work and we didn’t resent any of the money we paid him. He then looked after all the tenders – the specification went to 32 pages, and you knew that any builder who was going to be bothered to look through this was serious. In fact, the builders we used were so good that we recommended them to some of our other friends.

“It was a question of opening up the building. We took out walls and added archways. Having a good builder was key…”

FE: how difficult was it to upgrade the property in a sensitive way?

PM: It was like the Black Hole of Calcutta when we bought it, but a lot of it was just studwork that was easy to take out. It was a question of opening up the building. We took out walls and added archways. But having a good builder was key…

FE: Knowing what you know now, would you have done anything differently?

PM: Apart from buying with another couple in an SCI – Société Civile Immobilière, a shared ownership property company – we wouldn’t. An SCI is marriage and it’s very complicated to get out of. Also now we know the local notary, I realise that I could’ve trusted him to do the work on his own. But the buying, renovation, remodelling – no, we wouldn’t have done it differently. It was a great experience.

FE: any advice for other house-buyers?

PM: Don’t be tempted to buy with friends. Also, if you can, avoid having two notaires. You won’t save money because they share the fees, but you can save time. And if you’re doing up property, you’ve got to speak French. Or if you don’t, you’ve got to have someone on site who you can trust with translating, who can act as a go-between.

FE: What do you like best about the Var?

PM: The greenery and, where we live in the upper Var, being able to drive around without running into traffic. Also, we love the clean air and the wonderful climate. We have four distinct seasons. Spring arrives and it’s beautiful, we have a hot summer but it’s a dry one, there are wonderful autumns and winters, where maybe twice a year we’ll get a snowfall, and the next day it’s gone. It’s just brilliant.

PM: Undoubtedly, that’s coming to grips with French bureaucracy! However, you must remember that we’ve experienced just as much bureaucracy growing up under the British system, but we’ve had maybe 40 or 50 years to assimilate it. When you come to France, you’ve got to get to grips with a whole new system of bureaucracy, compressed into a period of maybe six months. Many French civil servants have a hard kernel and can be quite aggressive and rude, but you have to get through that – the way you do it is with patience, humour and by learning French.

FE: What are the joys of life in the Var?

PM: The joys are culture, climate and cuisine. We do like the way of life, it’s more relaxed. There’s very much a rural feel to the place. You do get obsessed with the state of your olive trees! We’ve got 40 and picking olives on a lovely December day in a t-shirt is just fabulous. You do appreciate these much simpler pleasures.

Buying in the Var

With its glorious Mediterranean climate, the Var is a popular destination for retirees and holiday home buyers of all nationalities. Cheaper than the neighbouring alpes-maritimes, the Var is nonetheless one of the most expensive French départements in which to buy. However, according to notaires de France, prices have dropped over the past five years, with the median for older houses falling 8.9%, and they’re only just beginning to climb again, rising by 1.7% in the last year. Homes on or near the coast command a premium, but you’ll pay much less inland. 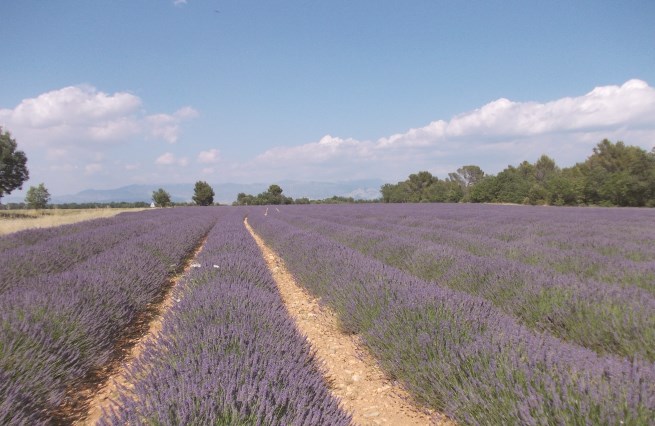 The area’s property styles vary from old Provençal farmhouses and pretty village houses, to spacious modern villas and apartments near the sea. You’ll always pay more for a pool and outside space. Village houses are a good bet for those on a modest budget and it’s possible to find one with a terrace or balcony for under €150,000, whereas a traditional country property will set you back from €270,000 for a small farmworkers’ cottage to €2,000,000 or more, for a large restored Provençal farmhouse with land and pool. Modern villas with a pool are plentiful and range from around €225,000, away from the coast, to €1,000,000plus close to the med. Prices for an apartment with a sea view start at around €120,000 for a studio.

The transport links with the UK are good, with flights into Nice, Marseille and Toulon-Hyères airports. London to Marseille by train takes about seven hours.