Guide to towns and villages in the Upper Aude Valley, south of Carcassonne

The Limoux area south of Carcassonne is proving to be one of the most popular areas for property hunters in the Aude – with easy access to the airport, many villages still retaining their medieval charm, and the wonderful scenery of the Pyrenees foothills, the area clearly also makes for a sound investment. Property prices in this area have risen considerably since the arrival of Ryanair at Carcassonne airport, but have now stabilised to some extent. There are still bargains to be had – especially if you are happy to renovate. As much of the industry in the area is agricultural, expect to find stone built barns ripe for conversion or small village houses in need of modernisation in the €80,000 – €150,000. Bear in mind, though, that as many of the medieval villages were built in a circular formation gardens are at a premium and you should expect to pay more for a village house with a decent sized garden. Expect to pay around €200,000 – €280,000 for a fully renovated three or four bedroom village house. There is a lot more choice for those who can extend their budget to €350,000 – with a good mix of traditional farmhouses, modern villas and town houses on offer, with a garden and even a swimming pool. Over €450,000 will get you a considerable amount of property such as very large farmhouses, gite complexes or property with land. Now let’s take a closer look at some of the towns and villages in the Limoux area.

Limoux is a market town and sous-prefecture in the Aude department of the Languedoc-Roussillon. It lies on the river Aude about 30 km due south of Carcassonne. The town is perhaps best known for its winter festival called Fecos, often referred to (inaccurately) as a Carnival or fête. This takes place between January and Easter and is conducted in Occitan, the traditional language of the area (in Occitan the word Fècos is the name of a dance characteristic of the festival). The predominant local industry is wine production. Limoux is becoming better known internationally for its sparkling wine, Blanquette, the recipe for which according to local legend was “stolen” by Dom Perignon to create champagne. The numerous local vineyards also produce fine non-sparkling wines, and wine-tasting is a popular activity amongst tourists and residents alike!

Limoux has a number of historical points of interest. Traces have been found of Neolithic occupation on the site of the present day town. During the infamous crusades against the Albigeios (the Cathars), despite being under the jurisdiction of the crusade-friendly Count of Razès, Limoux was taken by Simon de Montfort and became a crown possession in 1296. In the 14th century, the city was razed by the Black Prince. In the 16th-century, it was the site of a battlefield between Protestants and Catholics. 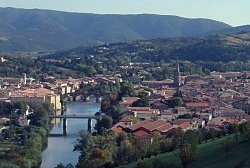 Today the town is much calmer! The cafe scene is dominant in Limoux where food and drink represent the main cultural pastime. Limoux’s town centre offers a selection of excellent restaurants and bars, shops, and a local market held on the Friday of every week. The heart of the town is the place de la Republique, a wide square with some fine stone arcading and a number of timber framed houses. Other points of interest are the Petiet Museum, the piano museum and the Catha-Rama (offering history and films about the Cathar tradition).

The town has a population of about 10,000 inhabitants, and is well serviced with schools and sporting facilities – including municipal swimming pools and rugby pitches. The Limoux Rugby League team plays at the National I level and its Union team plays at the National III level. There are also around 50 cultural and sporting clubs, from the local choir to the judo club, giving new residents to the area ample scope for getting to know their neighbours! 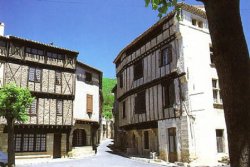 Alet-les-Bains is a beautiful medieval village on the banks of the Aude 36 km south of Carcassonne and, with Rennes-le-Chateau nearby, is very much in Cathar country. The village really is quite charming, with narrow cobbled streets, the ruined Abbey and parts of the medieval ramparts still standing. It is believed that Nostradamus once lived in the village. Locally the village is best known for its water, sourced from natural thermal springs, which has been bottled here for years and is sold in local supermarkets. The village also has a thermal spa opened from May to September, and supposedly Charlemagne once took a dip in its restorative waters! Other amenities include a grocers, a post office, a couple of restaurants/ cafés, a hotel, a campsite, a municipal swimming pool and tennis courts, and a number of outdoor activity companies. There is also the rather incongruous casino on the southern outskirts of the village. The village is often host to several cultural festivals throughout the year, including the Chemin des Artistes (open studios for local artists). With a population of just under 500 this picturesque village is very much sought after among property buyers. 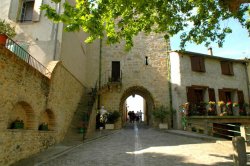 The legacy of the rich history of the Aude is that there is often more than one name for its different areas, some of which are used in administration, others appear in tourism guides and yet others are only known by estate agents! Often mistaken as the whole of the Malpere area south-west of Carcassonne, the Razes (pronounced Raz-ez) is in fact the southern extremity of the Malpere to the north-west of Limoux. Defined by endless rolling vineyards and pretty villages and combined with its proximity to all the facilities in Limoux and the airport in Carcassonne, it’s easy to see what attracts people to this highly sought-after part of the Languedoc.

The area is becoming fairly well-populated with entrepreneurial non-French families, looking to find an alternative lifestyle and setting up businesses ranging from Bed & Breakfasts to vineyards. The Razes property market has, naturally, become more competitive since the “invasion” of northern Europeans (including northern French!). It is still possible to find the “stone house with a garden” dream home, but this type of property is becoming rarer and buyers should be prepared to pay upwards of €150,000 for a medium sized property in good condition. 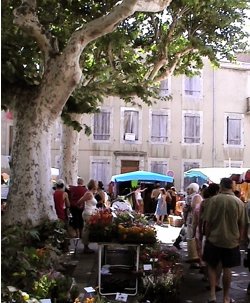 There has been a settlement at Esperaza since Roman times although the main village that you see today, 50 km south of Carcassonne along the River Aude, was built mostly from the 13th century onwards. For many years the village remained a smallish outpost with its inhabitants subsisting on low level industries that benefited from the river running through it, such as working wheat mills, tanneries and wood production. The town flourished in the 19th century when it became the second most important area in the global market for hat making. As hat wearing became less fashionable, the decline of this industry in the 1950s hit the town hard resulting in a sharp fall in the local population. But Esperaza’s fortune was about to change again, when in the 1980s a group of amateur archaeologists uncovered one of the largest fossil deposits in Europe in the hills above the village, including entirely preserved dinosaur skeletons. Today, Esperaza is home to a dedicated Museum of Dinosaurs which welcomes about 45,000 tourists a year to inspect its store of over 2000 dinosaur bones and has become an important centre for research in the field.

Esperaza has thus become a popular village for property investment, with many second home owners benefiting from renting out their properties in the tourist season. It is a very good location from which to explore the region, within easy access to other important historical sites of interest such as the villages of Rennes-le-Chateau, Arques and Puivert. There is a permanent local population of about 2200, a number of food shops and nearby supermarkets, and good services available including a bank, a pharmacy, offices of several medical professionals, a creche and a primary school. The highlight of the Esperaza week is the large Sunday market which is installed in the main square, with stalls ranging from local cheeses and honeys, to clothing and jewellery.

The quiet town of Chalabre is located about an hour south-west of Carcassonne, in a part of the Aude locally known as the Quercorb which is roughly defined as lying between the upper valley of the River Aude, the Pyrenees, and the Ariege department. In the middle ages, Chalabre housed a thriving community and was the capital of the Quercorb, dominated by the Chateau de Mauleon. Today many vestiges of its medieval roots remain intact, including its delightful market square surrounded by half-timbered buildings. The chateau also plays its part, with regular jousting events and medieval music festivals staged there during the summer season. Although its population numbers just 1200, the town is now the communal centre for several nearby villages and is very well served with two pharmacies, several doctor’s offices, a bank, a post office, two bars, bakeries, grocers, butchers, a florist, a fashion boutique, a hotel, a few restaurants, municipal tennis courts, a creche, primary and secondary schools; there is also a small local market on Saturday mornings. 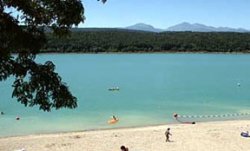 The highlight of Chalabre, however, has to be the spectacular scenery and points of interest all around it. The town is just a few kilometres from Montbel Lake – an enormous expanse of water where you can go sailing, fishing or swimming; there is also a swimming lake at the popular village of Puivert nearby, as well as the dramatic Chateau de Puivert. From the surrounding hilltops there are superb views of the Pyrenees and the area is a haven for keen walkers, equestrians or cyclists. Chalabre is also within 20 minutes of the increasingly popular town of Mirepoix in the Ariege, making this area a very good bet for property investment.

Buying a Home in Brittany