These neighbours, with their glorious greenscapes, are just are a stone’s throw from the Channel coast

Thinking of buying in Normandy? As well as the lush countryside and great food, you’re probably drawn to the miles of coastline. However, this region has two inland areas that are well worth considering too. The only Normandy département not to have a coastline, Orne came into being after the Revolution. With La Manche and Calvados, it forms Lower Normandy and is packed with historic centres and pretty villages. Property hotspots here include its principal town (and the third biggest in Normandy) Alençon, as well as Argentan, Domfront-en-Poiraie, Flers and Bagnoles-de-l’Orne.

The nearest airport to Orne is at Caen, with flights here from locations across the UK. Flybe operates a service from London and there are also flights from Bristol, Manchester and Birmingham. Alençon is just two hours’ TGV ride from Paris. Brittany Ferries operates between Caen and Portsmouth. If you’re driving, from Caen head south on the N158, which becomes the A88 at Falaise and takes you through the département’s heartlands.

With its proximity to the British Isles, you won’t be surprised to hear that Orne’s climate is classified as warm and temperate, with significant rainfall throughout the year – even during its driest months.

You can snap up a townhouse in Alençon’s old quarter for €200,000, while further out, a three-bedroom longère-style property will set you back €250,000 and substantial family homes with land start at €280,000. In Domfront-en-Poiraie, a house with a gîte and a good amount of land can be found for less than €150,000, while in picturesque Bagnoles-de-l’Orne, you can find traditional farms and mills, ripe for B&B conversion, averaging around €400,000. 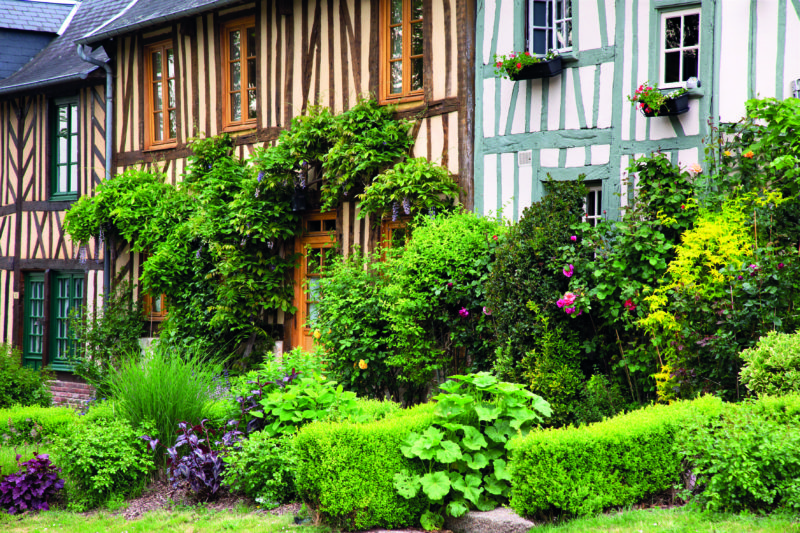 Most of Eure lies inland but, unlike Orne, it does have a coastline (albeit miniscule). With Seine-Maritime, it forms Upper Normandy and is named after the Eure river, a tributary of the Seine. Stomping ground of Richard the Lionheart, Eure has six châteaux of historic note; the Impressionists made their mark here as well – Monet lived in Giverny. It’s well placed for access to Rouen, chic coastal resorts such as Honfleur, plus Paris (it’s a popular weekend getaway). Lush countryside makes it a haven for outdoor pursuits, too.

Catch the Eurostar from London St Pancras, change at Paris and hop on a train at SaintLazare and you’ll be in Eure in less than five hours door to door. You can also fly to Caen with Flybe (www.flybe.com) or catch the ferry from Portsmouth to Le Havre, then head southeast on the A13.

Like its neighbour, Eure’s climate is a warm and temperate one with rainfall aplenty – even when the rest of France is feeling hot, hot, hot. This high level of rainfall is what makes this corner of France so green and allowed Monet’s garden to flourish.

As with Orne, prices here are cheaper than other Normandy départements because of the lack of coastline. However, property prices rise the closer you get to Paris. Eure has a wide range of character homes from the €350,000 mark to well over €1 million, with countryside equestrian properties available for around €500,000. Traditional dwellings with large plots suitable for gîte businesses or B&Bs cost anything upwards of €300,000 – depending on how much land they come with. Smaller family homes or doer-uppers can be found for €120,000 towards Bernay or Brionne.

Nature lovers should head for the Parc Naturel Régional des Boucles de la Seine Normande and the Marais-Vernier. Several voies vertes allow you to explore Eure on foot or by bike. There are also water sports galore: canoeing, kayaking, cycling, pedal boat rides and more on its waterways. It’s a big equestrian hub with lots of horse-related activities to enjoy.