A Property Update from the Southern Lot and Quercy 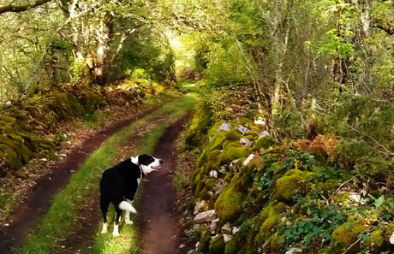 No Country for Fussy Gardeners

The other morning my French neighbour met me as I walked with my dogs along the lane that passes my cottage and leads down to the village pond. He asked a favour of me, would I mind keeping an eye open for a pair of spectacles which he’d lost whilst cycling along the lane. I said I’d do my best but noted it might be difficult because the wild plants and grasses were already shooting up with the arrival of spring. The leaves of violets and cowslips are already so dense and green and seem to have grown during the time it takes to walk to the end of the lane and back, making it difficult to find anything lost in the undergrowth.
My neighbour commented on how he loved the wild countryside of the Quercy and how his style preference is for a jardin anglais over the jardin français with its formal patterns. He went on to talk about the wild plants that abound here, how many and which are edible and which are used medicinally, of which quite a number are.

Meanwhile my patient dogs started staring expectantly at me so I checked my watch and was amazed to see that we’d been chatting for over an hour, standing in the lane – no one else had passed, but that’s normal for where I live.

Though I did not spot my neighbour’s specs, paying close attention to the plants and trees along ‘my’ lane only made me appreciate it more. My husband and I fell in love with this little lane over 20 years ago as we strolled along it towards the house that we were about to buy. Along its 100 metres one passes between hazel, walnut, plum and cherry trees, none planned or planted by humans, it’s the birds we have to thank and nature which had planned it.

Our own meadows are literally carpeted with trefoils, thyme, forget-me-nots, clover and many varieties of orchid: purple vetch, lady’s bedstraw, honeysuckle and eglantine are flowering by May and they’re all a-buzz with busy bees and other pollinators and clouds of butterflies. 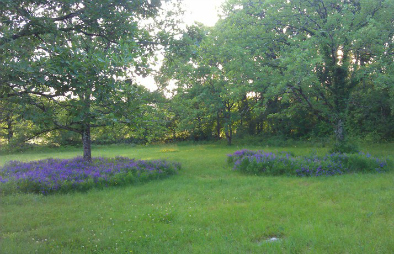 None of this abundance needs a gardener’s care; this is nature’s garden and she seems to be saying to us, “Do not disturb!”

And now here is someone on the radio listing plants that are essential for the survival of bumblebees and goodness me most of them have sown themselves around my cottage. And in the latest Sunday supplements the trend is the same. It almost seems all I should do in order to help the environment is to do nothing, except sit back and be serenaded by the cuckoos, nightingales and orioles that have now arrived.

Well, not quite, I do mow my meadows, walking behind a robust mower. I keep the mower blade raised and I weave and swerve around the taller flowers leaving islands and paths between, and it’s all good exercise to keep me thinking I’m keeping fit.

It’s a good illustration of how life is viewed here in the Quercy in that everything will happen in its own rhythm and season and there is no point in rushing things. The property market in this area is a good example: true enough the autoroute A20 now brings new employment prospects for inhabitants of our area because it brings Toulouse within around an hour’s commuting distance away; but final completion of the construction was held up for three years whilst a parish council near Cahors decided how best to join up the last 100 metres. No matter that drivers from Paris wanting to reach Spain in the shortest possible time had to contain themselves in patience, business could wait, it’ll all be the same in a hundred years…

So the locals tend to be very patient and take the long view, I’ve been in this area now for over 20 years and it’s no surprise to see old country houses displaying an ‘A Vendre’ sign becoming less legible with the passing years and whilst the owners/vendors will tidy up the surrounding garden not much more is done, the owner is content to await the arrival of a purchaser willing to buy at the owner’s asking price. Most often such a purchaser will be foreign to and unfamiliar with the area except for past holidays but who has decided at last to commit to owning a piece of this rural idyll.

And, “Aye, there’s the rub”, to quote the Bard of Avon, because whilst the local owner is comfortable with taking the long view, the purchaser is feeling rushed, time already eating into his holiday period he must make a decision. In this way expensive mistakes are so easily made, my family knows because it was exactly our position many years ago: we came, we bought, we regretted. Fortunately we lived to replace our mistake with our more suitable current home.

It would have been so much more satisfying if we’d had someone living permanently in the area who could take the time to search extensively and inspect in depth each and every property likely to suit our needs and preferences, and then to have enough experience of the local market trends to be able to negotiate a realistic purchase price. But we had never heard of a purchaser’s agent, if such a creature had indeed existed back then.

In the current recessionary period there are certainly bargains to be found in properties in rural France, but I’ve yet to meet a local vendor who feels obliged to offer a discount, being always prepared to take the view that sooner or later someone will come along who, being in a hurry, will pay his price. And that is why I’m so glad to be acting as a buyer’s agent, because being permanently on the spot for many years I have gathered enough experience of the local area to be a useful aid in helping others to land upon their own corner of this idyllic Quercy with enough euros left in their pockets to be able to enjoy themselves.