A Diary of a Barn Conversion in the Limousin – Part 4

First published: 14th May 2007 by FrenchEntrée 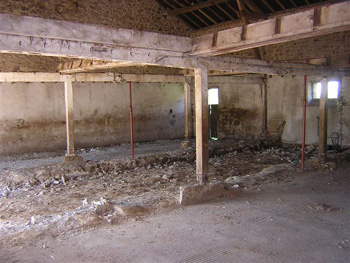 This month has been completely focused on the floor and I am pleased to say we have finally got it all out. Physically it has been really hard going but it’s been great for a daily workout!

We got ourselves to the stage of removing the majority of the concrete layer and about 200 huge rocks so that we could call in Colin, Ray and Billy to dig down to the required depth using their digger and bobcat. However before they could start digging out we needed to clear out the last remaining timbers. We had a huge beam which was just too huge for us to remove manually, and 3 others that were steel RSJ’s with wooden beams bolted through from either side. This again made them far too big and heavy to remove manually. Colin and Ray did a super job of lifting those that they could off with the bobcat and then cut through one of the RSJ’s with Oxyacetylene as it was embedded in the wall. They made it all look so easy with the right equipment! 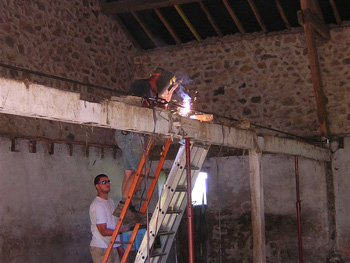 Then there were the 2 main beams running front to back which tie the A frames of the roof in tight and stop ‘roof spread’ from occurring. Unfortunately the position of them is just a bit too low so we needed to replace them with metal tie bars which attach to each A frame and are joined in the middle and pulled tight. We were given the details of a local French guy who makes the tie bars and so we went along armed with all our measurements and 3D drawings just to emphasize the requirements. No problem he said, they’ll be ready in 7 days. Well, about 3 weeks later after several times being told, “sorry, come back Tuesday/Thursday” etc, we were finally overjoyed to receive them with just a couple of days to get them in place, remove the old beams and be ready for the digger to start work. Of course, nothing goes to plan and the guy had made the bars about 10cm too short…!

No problem he said, have these extra fixings to extend the bars. Okay, fair enough we thought until over an hour later of playing about with them we realised they couldn’t possibly work as the thread of the bolts were going the wrong way. Feeling very despondent at this stage we called Colin to tell him we couldn’t get the space cleared for the digger. In true superhero fashion Colin, Ray and Billy arrived the next day with welding equipment and proceeded to extend the bars, remove the beams and crack on with the digging. Within two days the floor was all dug out and further trenches dug down in preparation for the block walls that will support the first floor.

I can’t tell you what a relief it was to get to this stage as we always knew the floor was going to be one of the biggest hurdles. I find it quite hard when some jobs are out of our control due to the machinery needed, but we’ve reached a turning point at last. We have bought all the pipework etc that we need to put in before we lay the new concrete floor, so hopefully we’ll see the barn start to go back together again in the near future.

Of course it’s still all fairly slow with the kids in tow. I’ve come to the conclusion that it’s a conspiracy. As soon as I mutter the words…“we must have this done by Friday“, for example, the higher beings throw in another bank holiday or half term!! We’ve built the kids a camp to play in under the hangar in an attempt to keep them amused when they need to come with us so we’ll see how long that lasts (the enjoyment I mean, not the camp – that’s a quality piece of craftsmanship!!). Oh good – it’ll be the summer holidays soon!