History of The Tarn – Famous People

The son of an unsuccessful businessman, he was born at Castres (Tarn), and educated at the Lycée Louis-le-Grand and the École normale supérieure. Jaurès took his degree as associate in philosophy in 1881; after teaching philosophy for two years at the lycée of Albi, he lectured at the University of Toulouse. He was elected Republican deputy for the département of Tarn in 1885. In 1889, after unsuccessfully contesting Castres, he returned to his professional duties at Toulouse, where he took an active interest in municipal affairs, and helped to found the medical faculty of the University. He also prepared two theses for his doctorate in philosophy, De primis socialismi germanici lineamentis apud Lutherum, Kant, Fichte et Hegel (1891), and De la réalité du monde sensible. 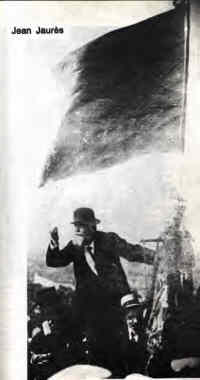 In 1892 he gave energetic support to the miners of Carmaux who went out on strike in consequence of the dismissal of a socialist workman, Calvignac; the next year, Jaurès was re-elected to the Chamber as deputy for Albi. Although he was defeated at the election of 1898 and was for four years outside the Chamber, his eloquent speeches made him a force in politics as an intellectual champion of Socialism. He edited La Petite Republique, and was one of the most energetic defenders of Alfred Dreyfus (during the Dreyfus Affair that marked a major conflict between Right and Left). He approved of the inclusion of Alexandre Millerand, the socialist, in the René Waldeck-Rousseau cabinet, though this led to a split with the more revolutionary section led by Jules Guesde.

Jaurès haranguing workers under a red flag.In 1902 Jaurès was again returned as deputy for Albi, and during the Combes administration his influence secured the coherence of the Radical-Socialist coalition known as the Bloc National. In 1904, he founded the socialist paper L’Humanité. The French socialist groups held a Congress at Rouen in March 1905, which resulted in a new consolidation; the new party, headed by Jaurès and Guesde, ceased to co-operate with the Radical groups, and became known as the Parti Socialiste Unifié (PSU), pledged to advance a collectivist programme. All the socialist movements unified the same year in the Section Française de l’Internationale Ouvrière (SFIO), the French section of the Second International. In the general elections of 1906, Jaurès was again elected for the Tarn.

His ability was now generally recognized, but the strength of the SFIO still had to reckon with the vigorous radicalism of Georges Clemenceau, who was able to appeal to his countrymen (in a notable speech in the spring of 1906) to rally to a Radical programme which had no socialist ideas in view, although Clemenceau was sensible to the condition of the working class. Clemenceau’s image as a strong and practical Radical leader considerably diminished the popularity of the socialists. Jaurès, in addition to his daily journalistic activity, published Les preuves; Affaire Dreyfus (1900); Action socialiste (1899); Etudes socialistes (1902), and, with other collaborators, Histoire socialiste (1901), etc.

Jaurès was a committed antimilitarist who tried to use diplomatic means to prevent what became the First World War. As conflict became imminent he tried to organise general strikes in France and Germany in order to force the governments to back down and negotiate. This was difficult since many Frenchmen wanted revenge for their defeat in the Franco-Prussian War.

One day before the mobilization that entangled France in the World War, he was assassinated in a Paris café, by Raoul Vilain, a young French nationalist, who resented Jaurès’ pacifism. Ten years after his death, Jaurés’ remains were tranferred to the Panthéon.

This article incorporates text from the Encyclopædia Britannica Eleventh Edition, a publication now in the public domain.

This article is licensed under the GNU Free Documentation License . It uses material from the Wikipedia article Jean Jaurès