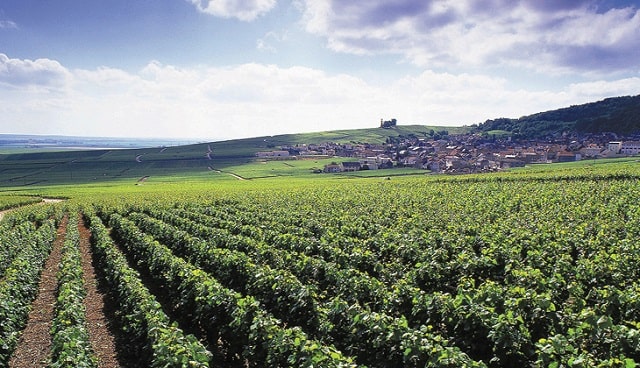 The decimation of Reims, the capital city of Champagne, one of the world’s finest wine regions, was matched by the destruction of its historic vineyards during 1914

The vineyards of France were turned into battlefields during World War 1. In the Champagne region, which is world famous for the quality of its terroir (a combination of soil, weather and other elements), the conflict destroyed an industry dating back to Roman times. Located just under 100 miles East of Paris, Champagne was right on the Western Front, and its beautiful vineyards simply stood no chance of surviving two major battles on its soil, in 1914 and 1915.
Scarred by countless bomb craters, its great châteaux destroyed by shelling, and with half of the region’s population lost, only a few wine producers, the Champenois, managed to stay on. With total dedication to their art, they managed to produce Champagne during the war years, surviving the German bombardment by sheltering in the underground limestone crayères (quarries) where wine is kept to age.

In Reims, locals and soldiers alike took refuge in the labyrinth of chalk galleries and crayères beneath the city, notably beneath the Taittinger champagne house on Place Saint-Nicaise. Taittinger’s cellars have borne witness to many layers of history, going back to an early church built on the site in Gallo-Roman times.

During the war, a hospital was set up there, and even two schools, which accommodated over 200 pupils. The carvings people made on the cellar walls during that period – names, dates, love hearts and regimental numbers – can still be seen today.

The Champagne stored in the crayères of Reims also played its part in the war effort. When French troops led a mutiny just to the West of the city in 1917, following the failed Nivelle Offensive, which they hoped would end the war within 48 hours, the rebel troops were given Champagne to help calm the situation.
A year later, when the Germans broke through to gain control of the Champagne villages along the River Marne, they soon lost momentum and started a rebellion. Champagne’s cellars were said to be full of “disgraceful drunken scenes” as German soldiers “refused to obey their officers”.

Champagne’s association with celebration dates to 987AD when, after being crowned in Reims Cathedral, the French King Hugh Capet served it at his coronation banquet. Unsurprisingly, the war marked the end of a golden age in which Champagne appeared to flow like water in Britain, France, Russia, Germany and the USA – the five countries at the heart of the war.

This instant and devastating drop in sales meant that, by 1918, the export market for Champagne was in tatters. Luckily for the major brands, such as Mumm and Taittinger, France rediscovered its love of Champagne after the war and remains its largest market.

When war broke out, GH Mumm was the world’s largest Champagne house. Established by the Von Mumm family in Reims during 1827, the company rose to become the globe’s top Champagne brand. Each year saw over three million bottles of Mumm sold, all bearing the motto ‘Nothing but quality’ and decorated with the red ribbons of the Légion d’Honneur, France’s highest accolade. However, when war broke out, a major problem became apparent – the Von Mumm family was German and had never applied for French citizenship. Consequently, in 1914, the French Government took control of this most lucrative business and turned Mumm’s offices into a military HQ. Today, Mumm is owned by Pernod Ricard, and based very firmly on French soil, in Paris.

The Taittinger family were loyally French. In 1870, after the Franco-Prussian war, this family of wine merchants moved from the Lorraine to just outside Paris so they could keep their French citizenship. In 1914, Pierre Taittinger went off to fight and was positioned close to Reims. During one fierce fight, he had a heart attack on the battlefield was taken to the Château de la Marquetterie, close to Epernay, which the French had turned into their regional HQ. While recuperating, he noticed that the château also boasted a beautiful vineyard.

Pierre Taittinger returned to Epernay in 1932, to buy that house and its vineyard. He turned the former French command post into his family home and HQ for his Champagne business, which is still owned by the Taittingers today.

In the aftermath of World War 1, things looked bleak for the Champagne industry, but there were two silver linings. When rebuilding their vineyards, producers could choose the best locations for the new plants, to ensure them the best grape quality. In addition, 1919 saw the French government pass a series of laws that led to the creation of the legal designation Appellation d’origine contrôlée (AOC), which set new winemaking laws and regional boundaries. From then on, only grapes grown in the region could be legally called Champagne.

Today, the Champagne industry is thriving. The region produces over 200 million bottles of Champagne each year, from 85,000 acres of vineyards, all standing as neat as soldiers, in perfect rows across this once war-torn corner of France.