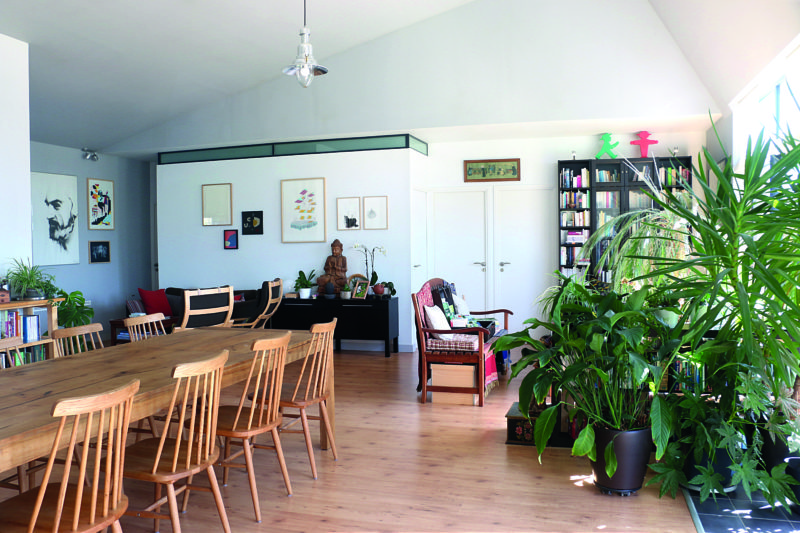 Peter Clark and Vincent Caplier created their award-winning eco-guest house in Somme from scratch, where sustainable living is key – inside and out, says Sylvia Edwards Davis.

FrenchEntée Magazine: Why did you settle on France?

Peter Clark: I had a career in London, so it looked like my French partner Vincent would join me there, until destiny intervened. Vincent suffers from a rare nerve disorder and an attack in 2003 left him with mobility issues, which led us to opt for a more relaxed lifestyle in the French countryside. Thus began our guest house adventure.

FE: Why did you decide to build, rather than buy an existing home?

PC: Originally we were looking for a place to renovate. We visited more than 30 properties, of which only a couple had real potential as guest houses – though they still didn’t fit with all our requirements. House prices were relatively high at the time. Becoming increasingly frustrated with house-hunting, we started thinking about building from scratch and this allowed us to explore new options from an environmental standpoint, which we certainly don’t regret. Having decided to build, we began looking for plots. We visited two; the first one was far from ideal, then we came across a large piece of land (7,000m2) in Beaumetz, near where Vincent grew up, at a very reasonable price.

The decision was instantaneous as it offered such potential – it was a blank canvas. We bought the plot in 2007, found an architect, agreed on the design, carried out a feasibility study (our budget was pretty tight) and got planning permission. Our architect managed the construction process including the contractors, but we were very involved with weekly site meetings. The orientation allowed us to develop the bioclimatic aspect of the project and, despite being right in the village, we had space for an ornamental garden, a large vegetable plot and pastures. The land arrangement (known as a courtil) was typical of a small farm in this region. 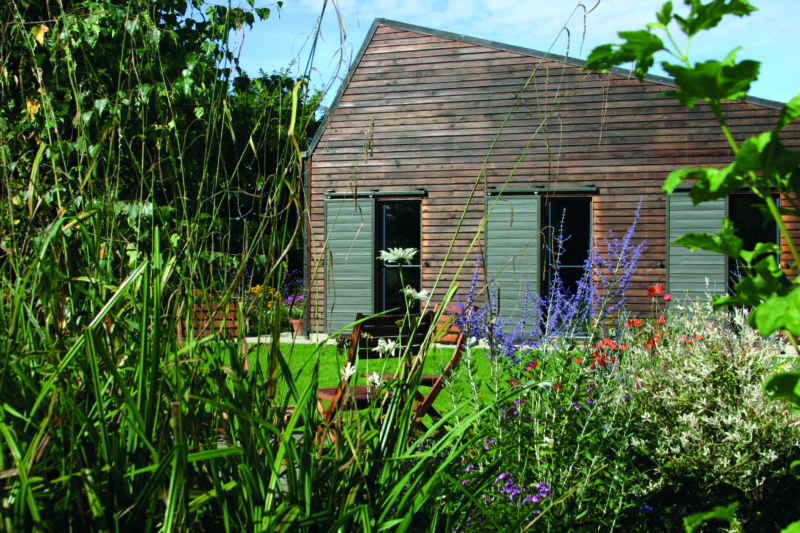 FE: Did building a home from scratch stretch your original budget?

PC: Our budget gave the contractors some cause for concern, but in the end everyone was happy with the outcome. Apparently we were perfect customers as we didn’t start modifying things. Building began in September 2008 and the house, Les Mazures, was ready for interior fit-out at the end of April 2009. It was a fairly rapid process. In October 2009 we moved in. We opened for business in May 2010, which meant we’d been able to get to know and appreciate the house before accepting paying guests.

Vincent’s parents also played a huge role in the success of the project. His dad was a great lover of gardening and he established all the landscaping with my help in the beginning. Sadly, he passed away last Christmas, so it felt even more special that we had spent that time together. Our guest house has since been awarded the prestigious Green Key label recognising our commitment to conveying the message about protecting the environment and building a sustainable future. 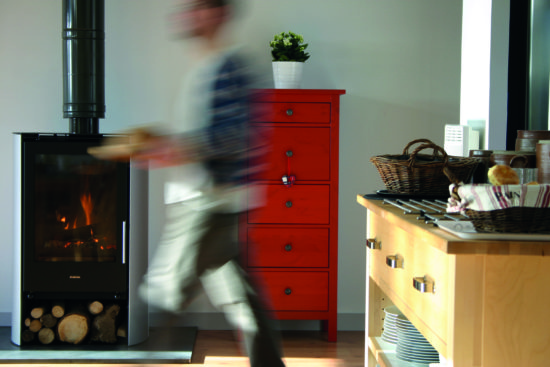 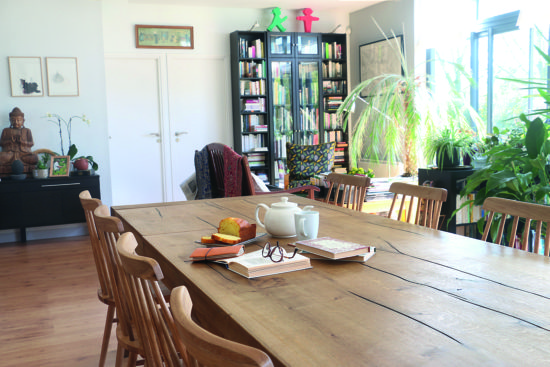 PC: The design of the house follows Le Corbusier’s principles of modular housing and incorporates bioclimatic principles. Our modern take on the traditional longère is resolutely contemporary, but it integrates perfectly with its surroundings. We have three guest rooms for a maximum of six people. The living room opens onto a substantial ornamental garden, two vegetable plots and pastures with chickens, geese, goats and sheep. The ecologically responsible practice translates into every aspect. The guest rooms have duvets and pillows made from natural materials and organic linen bedding, breakfasts are based around homemade breads, pastries and jams, plus local dairy products. Our table d’hôtes menus are inspired by our two cultures with ingredients sourced locally, and our vegetable gardens satisfying about 90 per cent of our needs. 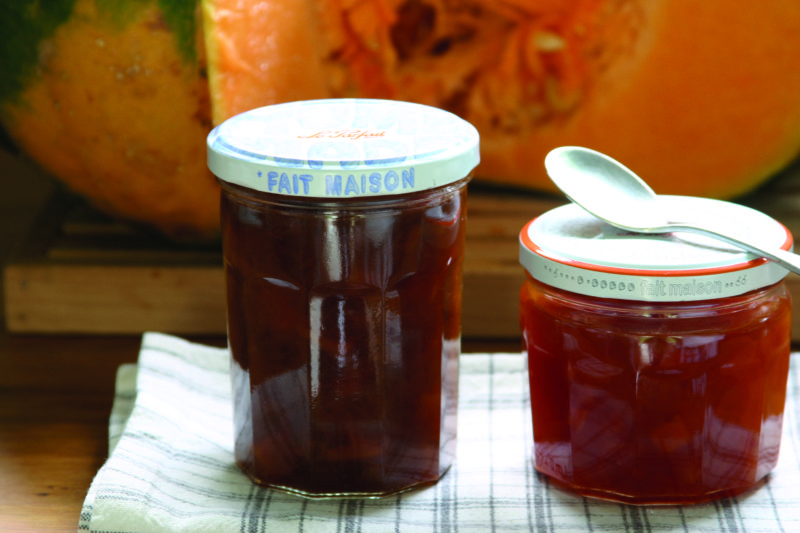 FE: The interiors are extremely inviting. How did you achieve this look?

PC: The interior design is all our own work, influenced by Vincent’s graphic and artistic background. While each space has its own colour theme, there’s an overall unity throughout, the different tones complement each other, as well as the graphic art. The natural colour of the wood brings a degree of neutrality that is echoed in the two wall colours: a grey underlining the external structure of the house and a white on the interior walls – both of which show nuances of blue varying with the passage of the day and the seasons, depending on the light.

The interior design has a very pictorial approach. Initially we sourced furniture from a well-known flat-pack brand, with the exception of a few pieces we already had, which gave us the effect we wanted without costing a fortune. As time has gone on we’ve changed things, making the interior more personal, but the overall look has remained the same. The central living space was a little challenging as it’s pretty big at 85m2. We incorporated several different styles in order to break it up into separate spaces while keeping it coherent. 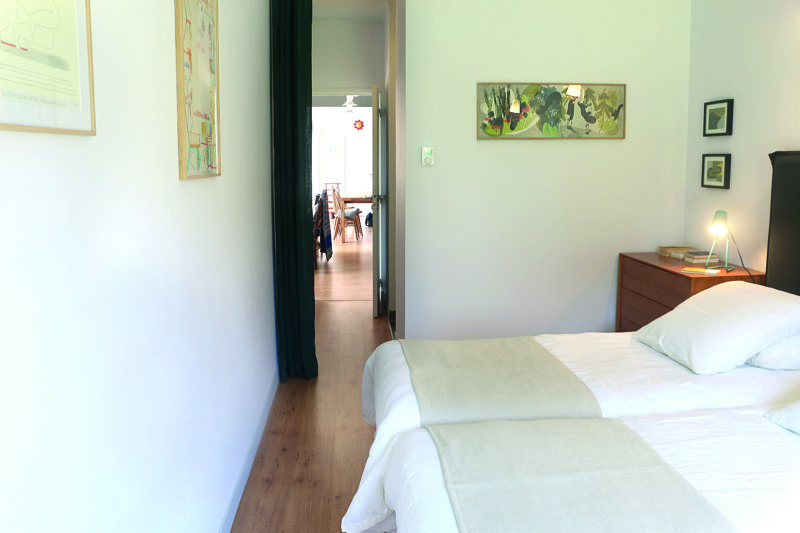 We Say… “The Somme region is a great place to set up a guest house. It’s easy to get to from the UK, has wonderful countryside to explore – plus a rich history including, of course, battlefield tours.”

PC: The little relaxation space next to the pond that catches the late afternoon sun. It’s also a part of the garden that Vincent can appreciate from the windows of the kitchen where he spends much of his time.

FE: What would you advise someone considering buying and/or embarking on a building project in France?

PC: It’s important to know the local culture and to recognise that all parts of France are not identical. I already had a good knowledge of the area, having visited regularly for more than five years before moving here – I can even understand the local patois.

FE: What was your biggest challenge?

PC: Our most nervous day was probably waiting for our first guests to arrive. It was at this point – for the first time – that we asked ourselves whether they would actually like the house. Happily we didn’t have anything to worry about.

FE: Given the chance, is there anything you would do differently?

PC: We could have definitely done with more cupboard space!

FE: Was the language barrier an issue?

PC: With Vincent being French, this has never been a problem. When we first moved to Amiens, he forced me to improve my schoolboy French by sending me alone to do the produce shopping in the town’s covered market each week.

FE: What has been the highlight so far?

PC: There are two. Firstly, being received by the Minister for the Environment at a ceremony in Paris in 2013 in recognition of our commitment to the National Strategy for
Biodiversity. We are the smallest organisation in France to be so recognised, alongside multi-billion-euro companies. Secondly, receiving my naturalisation decree from the Préfet of the Somme after acquiring French nationality. These two events testify to a real integration in my adopted country and make me feel very much at home here. 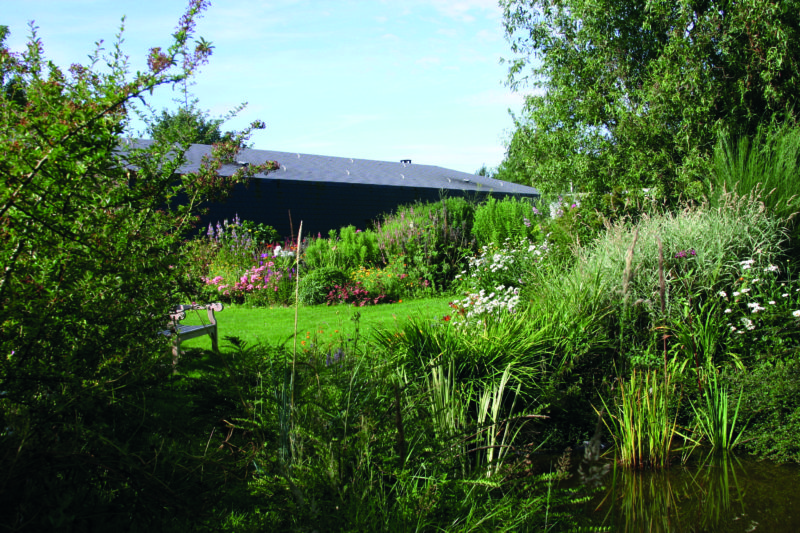 Browse our selection of brico and trade decorating tools to help you decorate your property to your desired style, including paint sprayers, wallpaper tools and paint brushes. Free delivery on orders over €70.